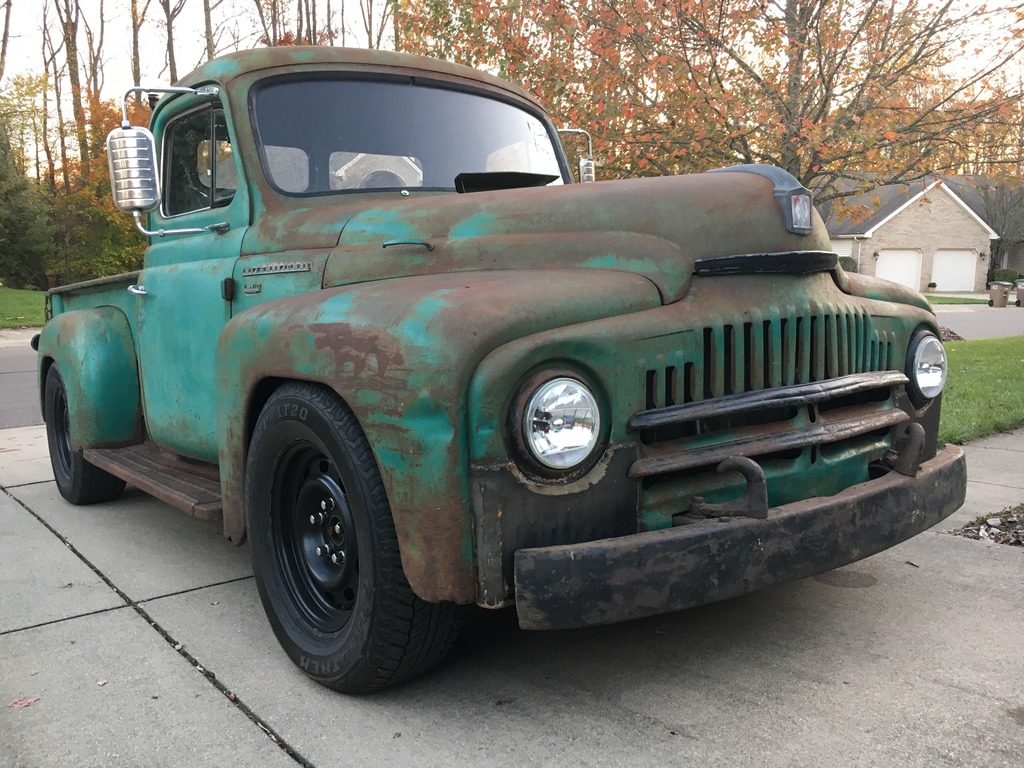 After hours of scouring Craigslist, Greg came upon an unmolested ‘51 International Harvester L110 with just a hint of rust. It was listed at the right price, not too far away, and owned by a nice old man who was happy to see it go. Well, it required a little haggling to get it to the price he wanted, but he found that once they struck a deal, the former owner had some tools and a few dollies to make hauling the behemoth home a little easier. This was Greg’s first attempt at hauling a truck, and, perhaps with a little naivety—he’d only brought a come-along and a few straps.

Off to a decent start. On closer inspection, Greg realized he had his work cut out for him. The headliner and door trim panels were once used as makeshift housing for hordes of mice. When the interior was cleaned, removing the trim panels and the headliner was simple, but Greg couldn’t pull them out without littering the floor with plenty of mouse excrement.

The exterior wasn’t in wonderful shape either. Rust had its way with the IH’s hide, and so Greg got to cutting some of the cancer and plating on a little sheetmetal. A little patching and a coat of POR15 all over the insides of the car, he was ready to start implanting parts—including the motor—from a Dodge Durango. 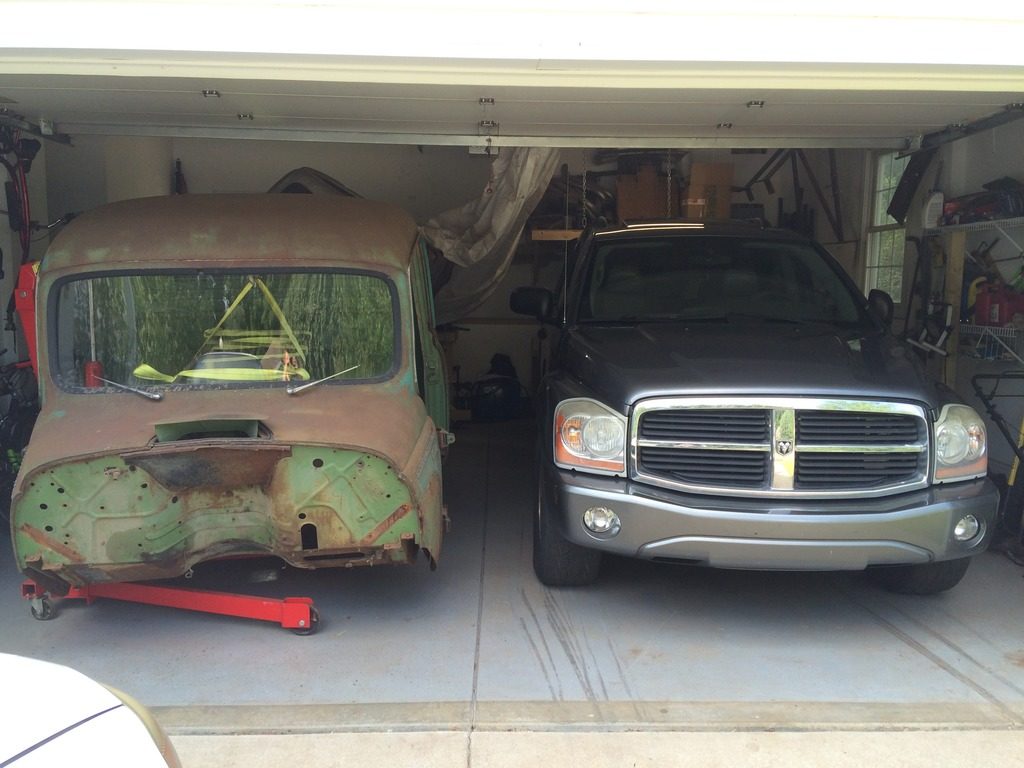 Greg kept cutting through the sturdily-built Dodge until he had himself a rolling chassis, transmission tunnel, and firewall. With a set of Ram wheels coated in flat black paint and some decent rubber, he tried to join the two and make ‘em stick. However, the Durango’s firewall and floor were still too wide, and needed a chop of 5″ from the driver’s side and 1″ from the passenger side as measured from the centerline of the floorpan. To ensure a tight bond, he seam welded all the way around the floor plan. Where the floors overlapped, he lap welded them, and where there was a gap, he cut 1″ wide, strips from 16-gauge steel to bridge it, then lap welded either side. Joining a truck built during the Truman administration with a modern, iPod-ready Durango isn’t that simple. 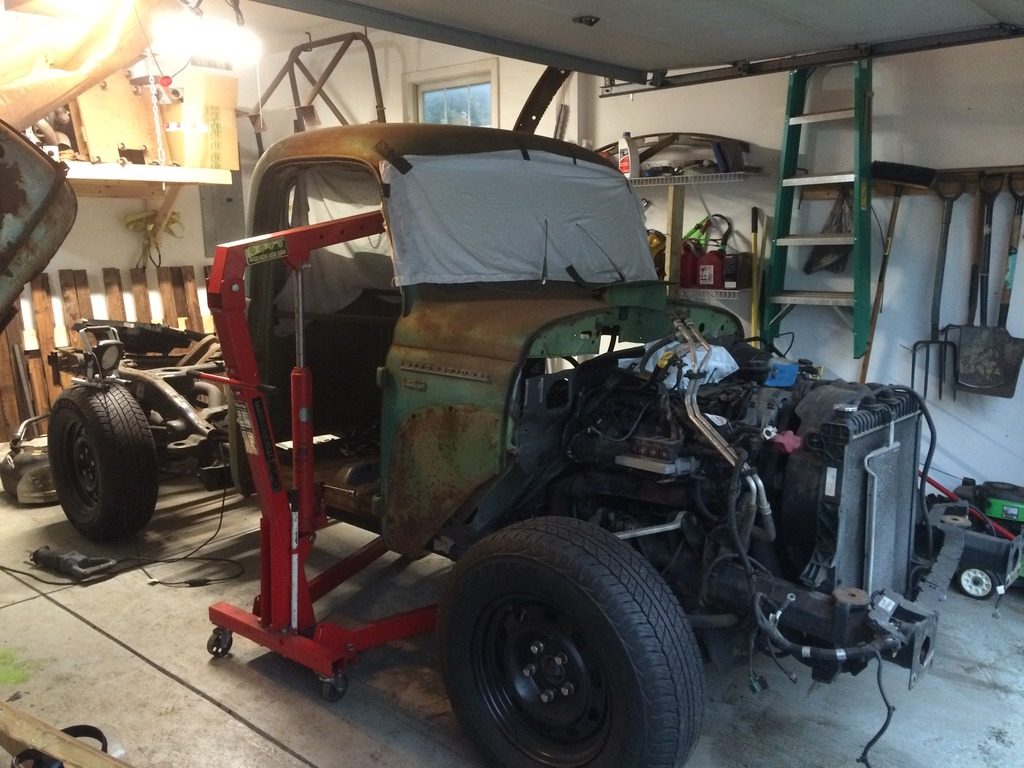 Greg retained the Durango firewall so he could easily reinstall the Durango steering column, steering wheel, pedals, and so on. The problem was the IH cab is narrower, the dashboard is shallower, and the length of the cab is shorter. With a bit of mixing and matching, the interior looked a strange place initially, but he had a 1951 Harvester with heated front seats, HVAC, dual climate control, power steering, power brakes, cruise control, and all the working dials. 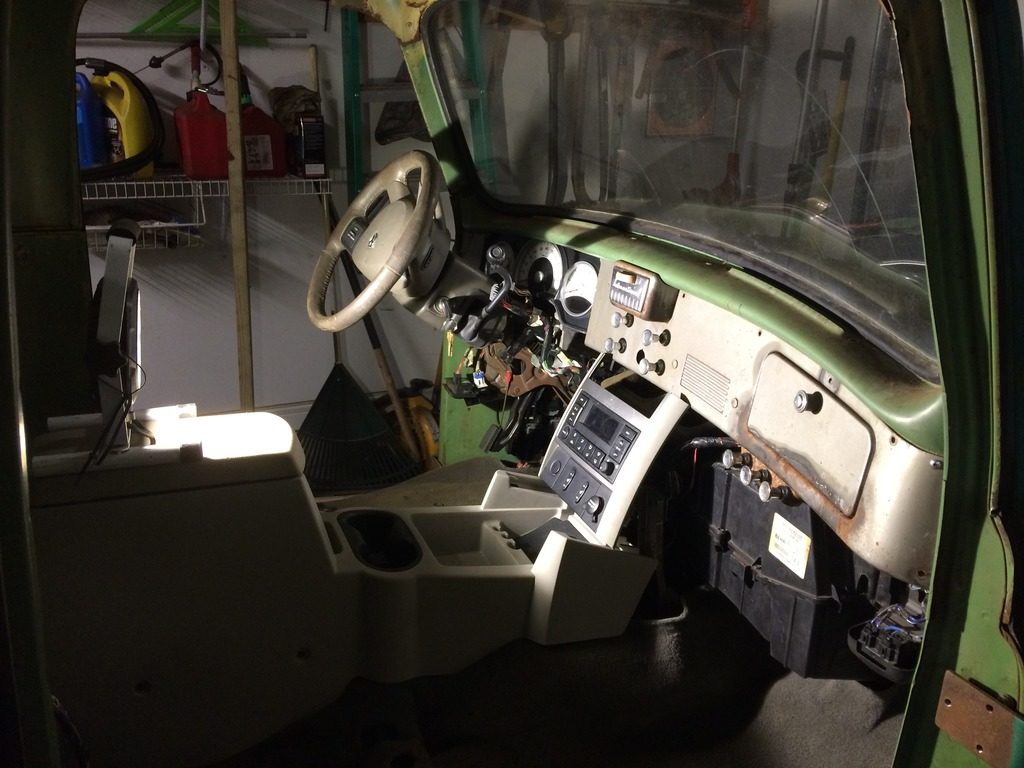 Greg then hooked the fuel tank back up for the second or third time, with 1-gauge battery cable to the battery now precariously placed on the muffler heat shield. However, he was ready for a risky maiden voyage. 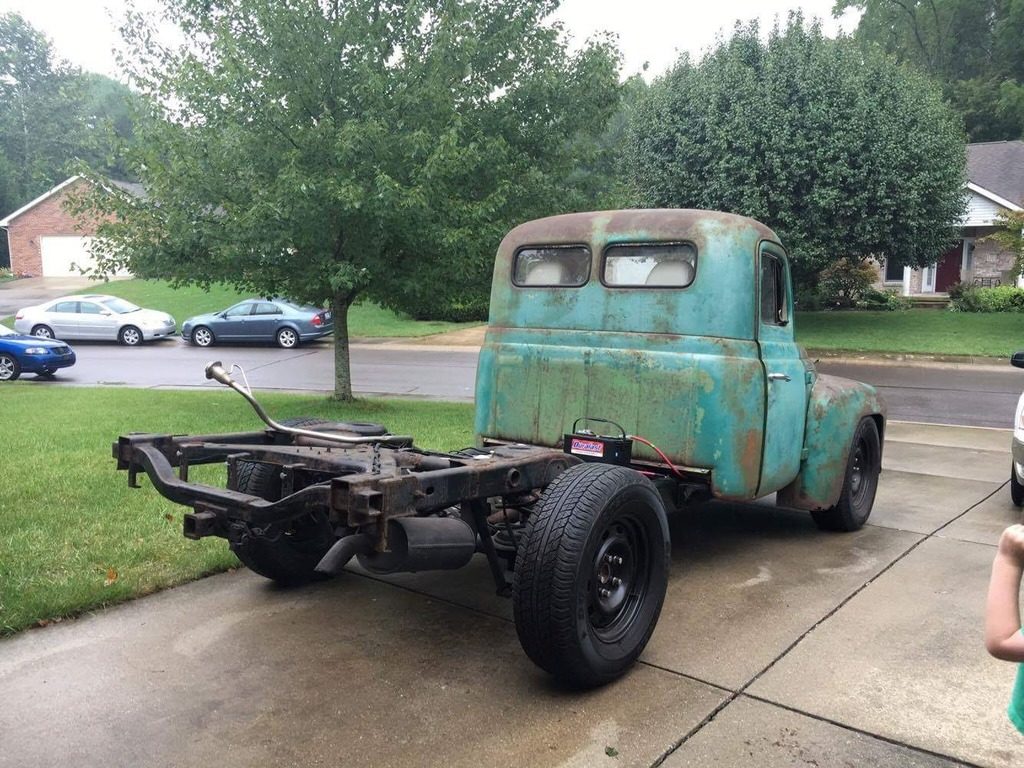 Next, he added five chassis braces in the bed, and notched out the rear panel to allow the factory tow hitch to protrude through. Then came the bed sides in place and some patchwork.

Though the tire fitment was near-perfect, they would rub over bumps when turning. Rather than chopping the fenders, Greg cranked up the torsion bars to give a bit more clearance. Thankfully, there wasn’t much adverse camber change either, so he could take this baddie on long trips without demolishing his front rubber. After fitting the Durango’s halogens inside the stock buckets, he managed to blend the old and new with some subtlety. 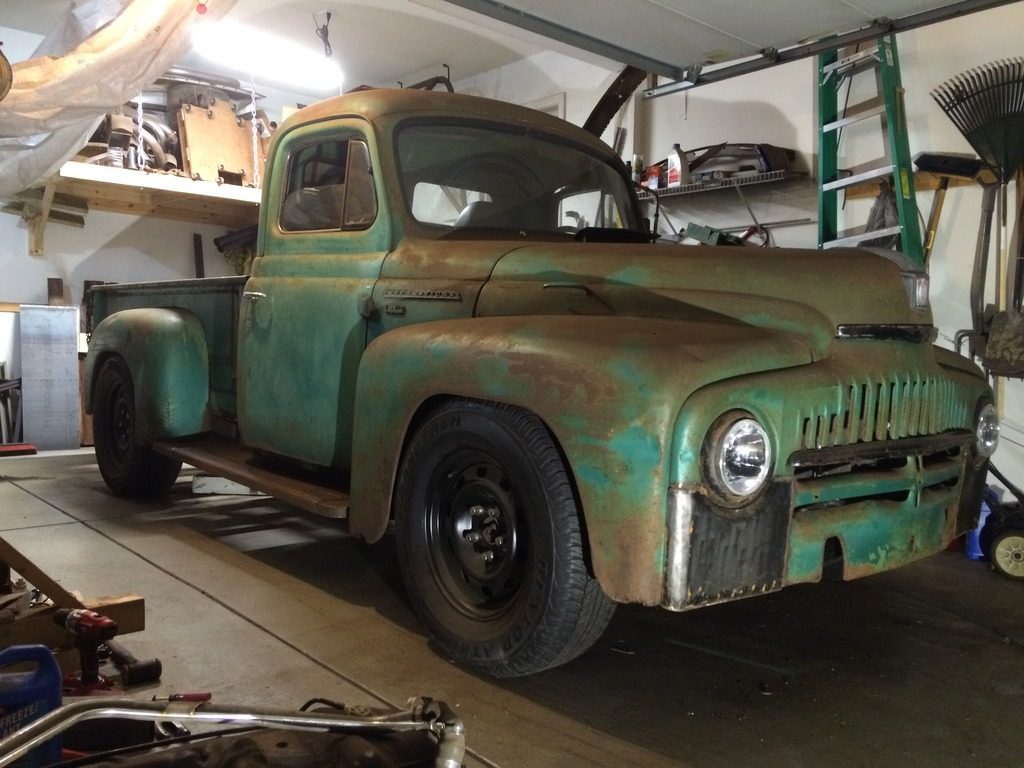 Bang bang! Intimidated by the prospect of getting the engine to turn over and worried that his hours in the garage would amount to little, Greg—admittedly not an electrician—struggled through the wiring portion of the build but pushed through the fear. After wiping the sweat from his eyes, he looked upon a truck with electricity flowing through its veins. With a hack and a cough, the exhaust blew a black plume of smoke and the motor churned to life.

Yet, it was far from finished. Realizing the bed angle wasn’t to his liking, Greg chopped through all the mounts he’d had just done and hinge up the back by about 2″, which gave him a much better bed angle. However, that meant welding over a fuel tank, which he carefully covered in sheets of steel and wet towels. After painting the braces black, he laid down a stained set of boards and had himself a beautiful bed. 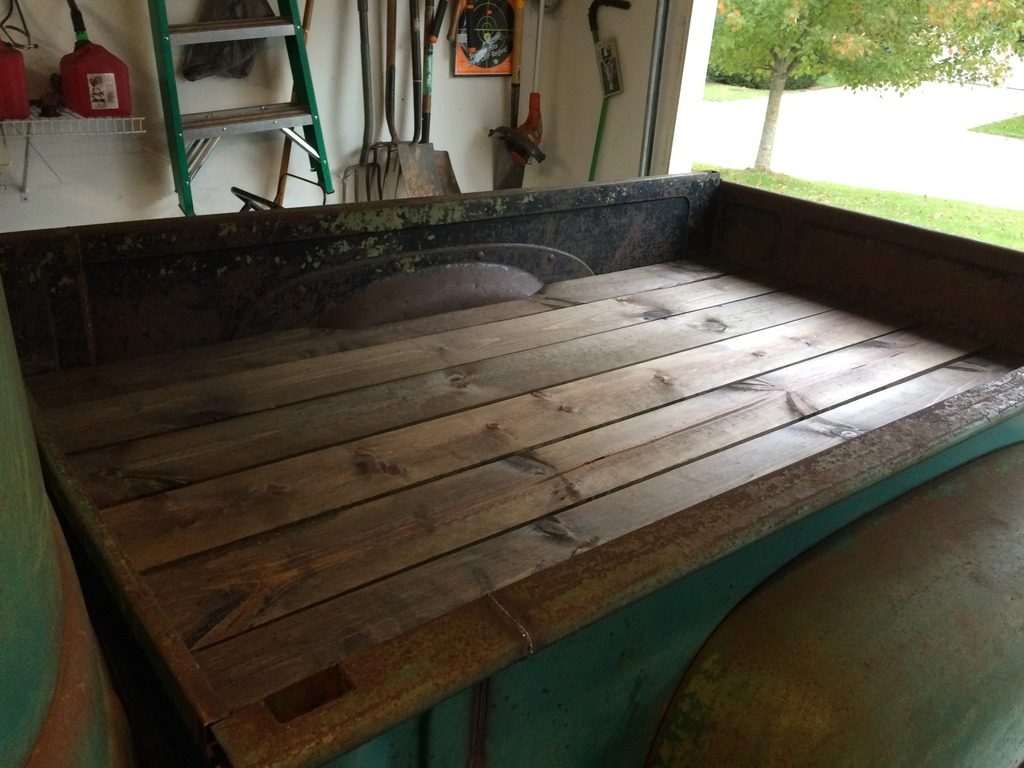 For the last bit of style, Greg picked up a bumper off a 1950 Ford F3 and a set of wing mirrors. Since a foot of chassis legs came with the bumper, Greg decided to weld them directly to the crossmember. Now, Greg had style, a comfortable platform to commute in, and a little comfort—thank goodness for modern recliner seats.