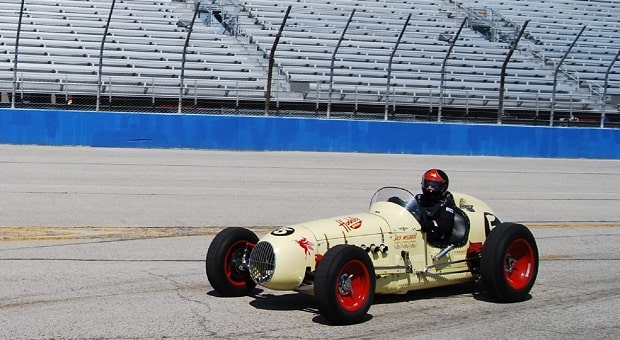 The 25th annual Millers of Milwaukee Vintage Indy Car event was held in Wisconsin on July 12-13. Harry A. Miller was the most influential race car builder of the 1920s-1930s. The Harry A. Miller Club was founded in 1995 and the race car meet has been held since then. It took place at the Milwaukee Mile.

Fifty cars from owners in 18 states showed up. The field included cars that were once driven by Ralph DePalma, Babe Stapp, Tommy Milton, Bill Holland, Joe Hunt and John Fray. A special treat was a 1909 Locomobile “Cobe Cup” car brought to the Midwest event by Tom Malloy of Corona, Calif.

Auctioneer Dana Mecum – a huge supporter of the club – brought seven cars, including a Miller V-16 that finished the 1931 Indianapolis 500 in fourth place. Carl Jensen’s 1930 Stutz stood out. Harry Stutz came from Indianapolis and built racing cars there. A Stutz won the first Indy 500.

Joe Freeman of Boston, Mass., brought four cars to Milwaukee including the black 1960 No. 26 Joe Hunt Ewing roadster, the 1961 black No. 67John Fray Upright Champ car, the Kurtis 500A Wolcott Special and the Auto Shipper 500A Offy.