It’s been a tough few days for racers, with three deaths acknowledged in as many days at the close of 2020, marking great losses in the world of motorsports.

Perhaps you’ve never heard of Oscar Kovaleski, a darn good, winning sports car racer and member of SCCA’s Hall of Fame, who was better known, after his driving days, as the purveyor of the Polish Racing Drivers Association – the PRDA. You could become a member if you were Polish (like Oscar), a racing driver, a non-Polish racer or a Polish non-racer. Those options meant everyone could join and all could have fun with the idea being a PRDA member.

Kovaleski, 88 at the time of his death, wanted to bring young people into the motorsports fold and did so with Kid Racer, which allowed kids to experience a pedal-driven race car at various venues. The operation was (and still is) hugely successful at each Long Beach race, where kids get to make their own car noises and whack other kids’ cars (not really condoned by the organizers but another step to reality), while professionals plied their trades outside the arena where the kids’ activities were held.

The sport also lost a mega-talent in John Paul Jr., who raced in CART and IRL Indy cars, IMSA sports cars and could wheel anything with superbly innate talent. Paul Jr.’s infamous father John Paul was jailed, along with his son, for drug smuggling, activities that were commonly used by other IMSA entrants during the high-flying 1980s. Paul Jr., who twice won the Rolex 24 at Daytona, the 1982 Mobil 1 12 Hours of Sebring and the 1983 CART Michigan 500, was an IMSA champion in 1982.

John Paul Jr spent the past couple of decades battling Huntington’s Disease, which took his life at the age of 60. Huntington’s is a genetic neurological disorder that afflicted other members of his maternal family. He spent the latter part of his life, after retiring from driving in 2001, working to raise awareness and funding for the disease. The racer did publish, with author Sylvia Wilkinson, the memories of his racing successes and championships, his familial troubles and the battle to live in the book “50/50”, published in 2018. 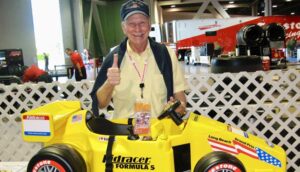 The penultimate day of the year took Aldo Andretti, the twin brother of Mario Andretti, just months after his son John succumbed to cancer. The brothers Andretti, born in Montona, Italy, emigrated to the United States in 1955, where both twins adopted motorsports with fervor. The duo, once in the US, built a Hudson Commodore and began racing it in 1959, never telling their parents. Both brothers were successful in motorsport but a second severe accident, one that fractured facial bones, stopped Aldo’s climb to the top of the racing mountain.

Although he didn’t drive after that – at the request of his twin – Aldo remained active in the sport. Son John. who passed earlier this year, was successful in every form of motor sport and son Adam has been successful in sports car racing. As Andretti Autosport said, in its tribute to this family member, “Nothing mattered more to Aldo than family, and it brought him great pride to share his life with wife and high-school sweetheart Corky, and their five children: Carolyn, Mark, John, Mary Jo and Adam.” Aldo Andretti was 80 years old.