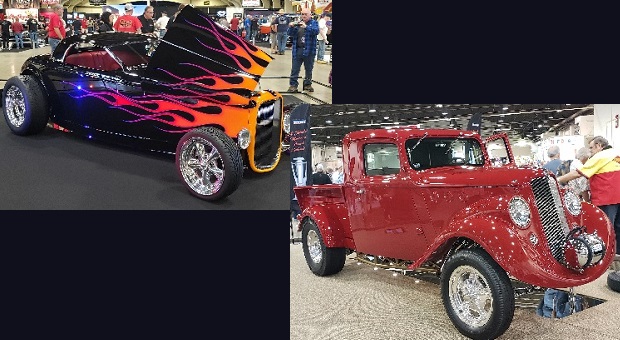 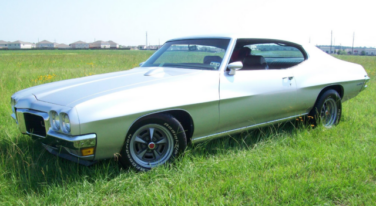 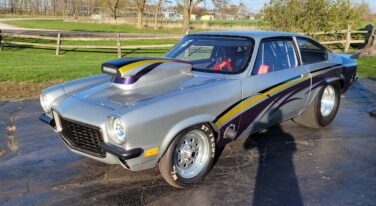 The AMBR award is given each year to the best “open” hot rod in the USA. This year’s winner, the 1932 Ford Roadster “’32 Kugel Muroc No.4” owned by Monte Belsham and built by Jerry Kugel, was chosen over 9 other contenders to claim the title’s $12,500 prize (provided by ARP) and become immortalized on the award’s 9.5-foot tall perpetual trophy beside a “who’s who” of hot rodding, including legendary builders like George Barris, Andy Brizio, Boyd Coddington, Barry White, Troy Ladd and Chip Foose.

The '32 Roadster is one of ten Highboy Roadsters created by Jerry Kugel. Originally built for Nick Barron, the car was modified and painted by Sqeeg’s Kustoms. It's powered by an LS1 with Hilborn injection and a 4L60-E transmission.

The Al Slonaker Memorial Award held the same importance as the AMBR award this year, with an equally impressive $12,500 prize purse thanks to award sponsor ARP. The winner of this year's prize, the 1936 Willys Model 77 owned by Ron and Vicki Ernsberger and built by The Tin Man’s Garage, can now claim bragging rights as this year's top custom. The Al Slonaker Memorial Award is dedicated to the memory of Al and Mary Slonaker, who founded the GNRS in 1949. It has been presented to the best non-roadster auto at the show every year since 1974.

The ’36 Willys boasts a 498 cubic inch Arias V6 Hemi married to a Tremec TKO 5-Speed. The build features a scratch built cab, bed, fenders and a heavily reworked front clip. The paint, done by The Refinery by Adam Krause, is PPG Rosso Mugello Ferrari Red with six coats of clear over two coats of red paint.

“Each year the best in the world congregate in Pomona to compete for America’s Most Beautiful Roadster and the Al Slonaker Memorial Award,” said John Buck, owner of Rod Shows and producer of the Grand National Roadster Show. “Monte Belsham’s ’32 Ford Roadster and Ron and Vicki Ernsberger’s ’36 Willys Model 77 fit the bill as some of the all-time greats in their respective classes. Both builds now stand among giants, and deservedly so.”

One other contest of note during this amazing event was the GNRS Trophy Girl Contest. Pinup model Lilac Saintclair took home the trophy this year.

Over 600 individual awards were presented during the GNRS' closing ceremonies. The tremendous event showcased more than 490 top-quality roadsters, hot rods, muscle cars, customs and more and attracted 50,000 fans over the course of the weekend.

The GNRS also featured a special exhibit called “Drag Racing Then and Now” in 2020. Presented by Lucas Oil and sponsored by Cragar Wheel, it hosted a curated selection of important, unique and stylish dragsters from throughout history. The vehicles on display ranged from a 1967 Buick Gran Sport Funny Car by Lipori/Fiberglass LTD, the only Buick powered Buick Funny car ever created, to Shirley Muldowney’s 1977 NHRA championship winning Top Fuel dragster, the first car piloted by a woman to earn an NHRA professional series crown.

This year’s show also featured appearances by celebrities from across the auto enthusiast community. Billy Gibbons of ZZ Top and Michael Anthony of Van Halen both in attended, while Mike Ness of Social Distortion displayed a 1954 Chevrolet. This year’s “Builder of the Year” was Dave Kindig, owner of Kindig-it Design and host of Bitchin Rides. Kindig earned the accolade due to decades of work pushing the boundaries on the design and execution of his custom car creations.

The annual pin stripers auction raised money for Teen Challenge in memory of the late Nicole Meguiar, daughter of Meguiar’s Polish’s Barry Meguiar. The auctions took place on Saturday and Sunday and raised $50,000.

For more information about the Grand National Roadster Show and for the full list of 2020 award winners, please visit RodShows.com. To see even more amazing pictures of 2020's event, visit HotrodHotline.com!
Back to Post