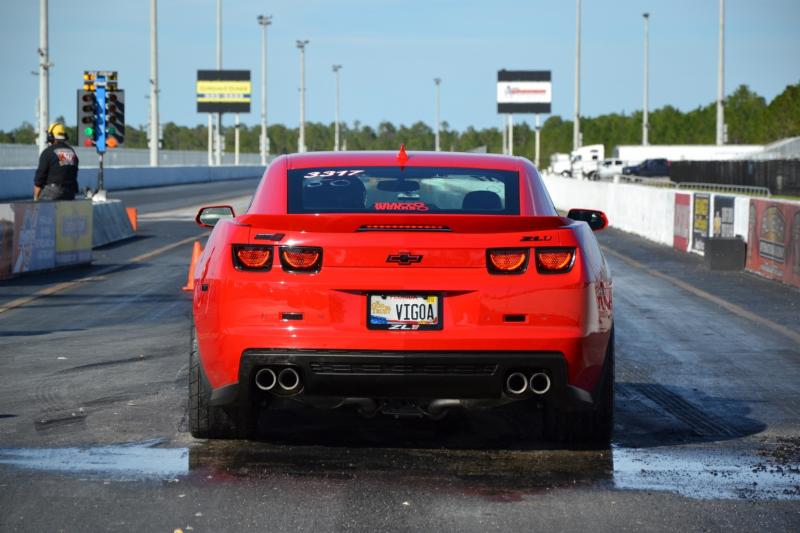 JUPITER, Fla. (February 13, 2015)
Palm Beach International Raceway (PBIR) fans witnessed a record ET for a street legal be shattered on the drag strip during Test and Tune Wednesday night. Hometown racer, Stephen Vigoa beat the prior quarter-mile record with a pass of 9.356-seconds at 146.78 miles per hour in his red 2013 ZL1. He did so with a stock bottom end, an aftermarket camshaft, ported stock heads, a ported supercharger, a little nitrous, the usual list of bolt-on’s, and was it mentioned – it is street legal.

According to Vigoa, it felt very different for him using the nitrous spray, stating “it was a different kind of boost, really putting you in the seat.”

Now that the record has been broken, PBIR wanted to know what direction the Florida native was going to go with the build of car. “Faster, we plan to put a 15-inch wheel conversion, do a transmission overhaul, and begin to really build out the engine,” said Vigoa.

Jay Healy of KraftWorks is the builder and tuner of the 2013 ZL1, which features a KraftWorks spec’d custom camshaft from COMP Cams. The supercharger is a 1.9L factory Eaton piece that’s been ported by Lee Latozke at Latozke Racing. The nitrous he credits to the Nitrous Outlet.