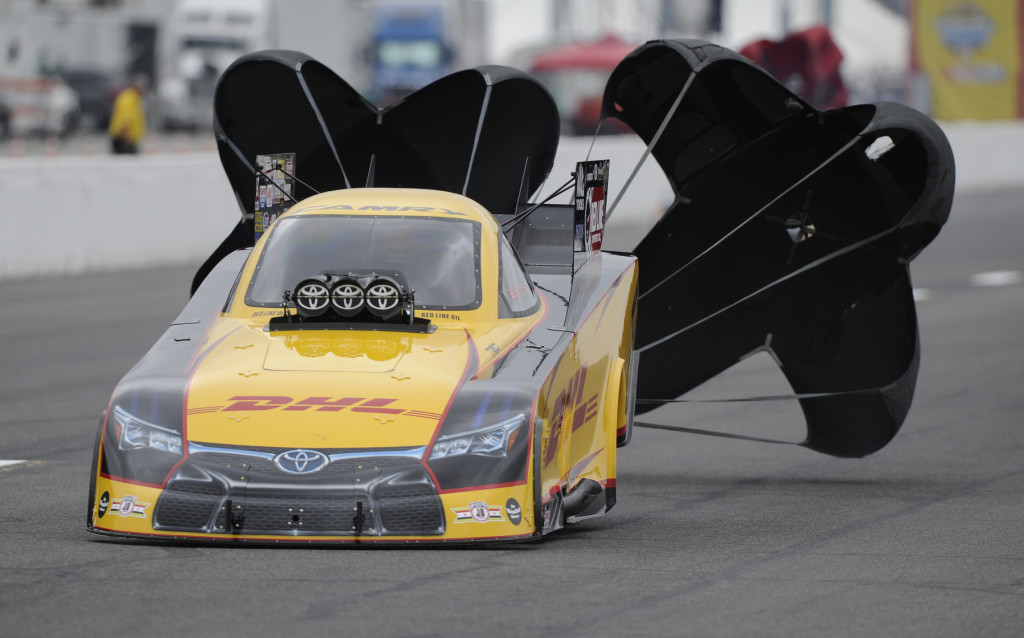 Del Worsham would be the first person to tell you that, as far as he’s concerned, this weekend’s Funny Car championship is just another set of races that’s he trying to win.

Worsham has a working man’s attitude towards the Auto Club NHRA Finals at Pomona.  There’s no sense of alarm or panic.  He’s been there before.

Winning the 2011 Top Fuel championship driving for Alan Johnson Racing, Worsham entered the race trailing by two points and took over the lead going into eliminations, gaining an eight-point separation over Spencer Massey with just the qualifying points.

Also in contention then were Larry Dixon and Antron Brown.  Brown lost first in the quarterfinals to Dixon.  Then Dixon lost to Tony Schumacher in the semi-finals, leaving a matchup between Worsham and Massey to decide it all. 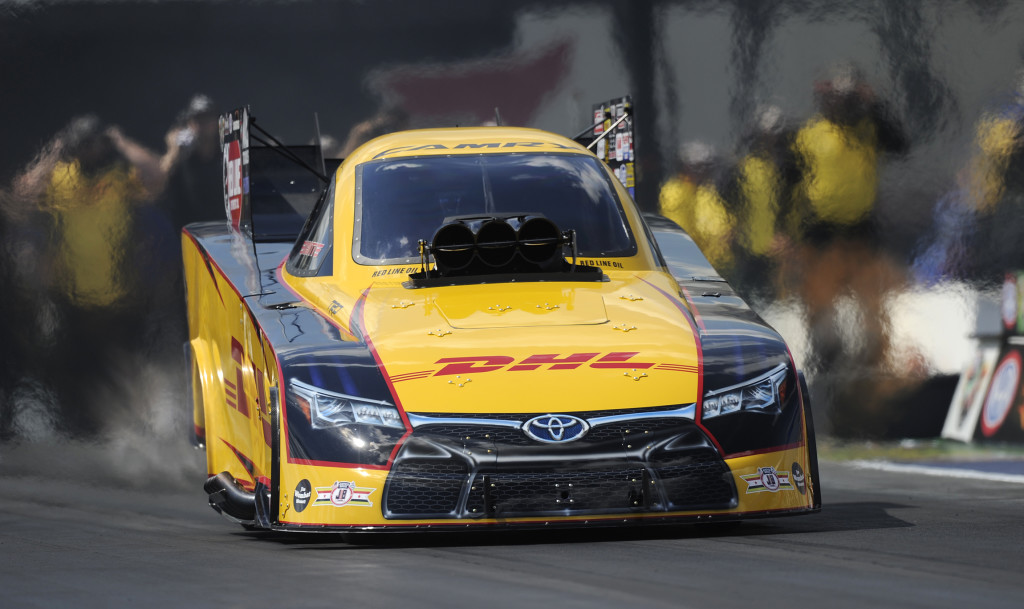 The AJR dragster delivered a winning time of 3.800 to 3.808 seconds and his first and only Top Fuel crown.

Heading into the Auto Club NHRA Finals this year, Worsham leads a swift Jack Beckman by 38 points for the NHRA Mello Yello Funny Car championship.  His stride is the same and as a true drag racer, he fully understands what’s at hand.

However, when he reflects about his 2011 Top Fuel campaign, he sees many differences.

“The first thing that’s different about it, I’m coming into the finals with a lead,” said Worsham.  “In 2011, I don’t believe I came into the race with a lead. There were four of us racing for the championship.  It was kind of a matter of seeing who was left over in the end, who was left in the final round.  That’s a little different coming into 2015.  We’ve won several races; we’ve had a very strong car, probably pretty much the strongest car through the Countdown as opposed to 2011, when we had the strongest car before the Countdown.  A little different scenario.  But a lot of similarities.” 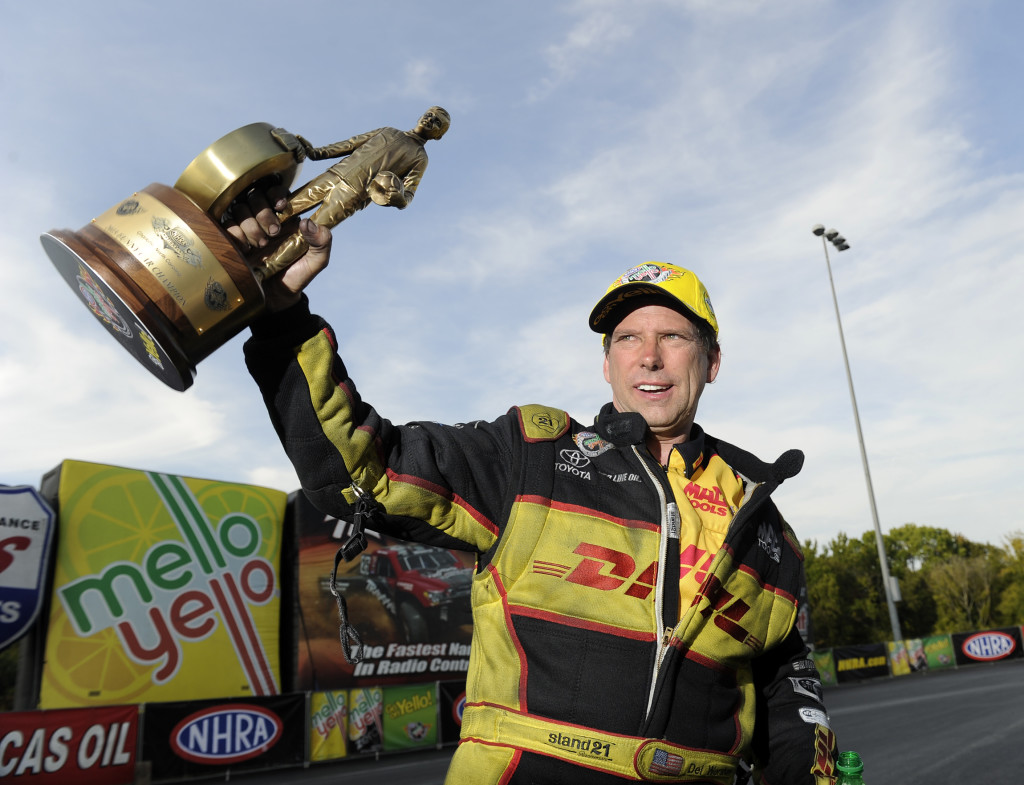 In between the long two-week waiting for Pomona to get started, Worsham was buried in the work, but not on his Kalitta Racing DHL Toyota.  He stayed over in Las Vegas working with his dad, Chuck, to help up and coming coming racers upgrade the license process by driving the Worsham family-owned Funny Car and Top Fuel dragster.

“In the middle of all this racing and everything else I do, I started this program for people who are alcohol racers or sportsman racers and want to become a professional racer.  I’ve been putting people in my personal Funny Car and Top Fuel dragster to give them a chance to test it out,”  Worsham said.  “I’m still drag racing.  I’m still involved.  My hands are dirty.  I’ve been working on the car.  It’s nice because I don’t have to sit around and worry about or think about what’s coming.”

As a buildup to the Countdown, Worsham decided to ride with the team to the Indy test  after the Brainderd race instead of going home. During the drive, he came up with a performance advantage that his Kalitta team unleashed the first race of the Countdown in Charlotte.

“I went to our team manager, Jim Oberhofer, I said, ‘We better get straight over to Indy’ and start testing because we don’t have a fast enough car here,” said the 37-time nitro winner.  “I I jumped in the hauler, drove with the guys.  I was scheduled to go home.  We started Wednesday morning, put together a pretty good little combination there, and felt like we definitely closed the gap to a certain degree.  Again, Jack still had a little bit of a performance advantage on us.  Ran Indy.  We had a couple decent runs. Took another hard look at the situation, our car, where we were, knew that some more changes had to be made.  We’ve been missing one thing on the car.  We knew a couple things they were doing over there.  They made this huge exhaust header change on their car and we hadn’t done it.  Didn’t think too much about it.  Back in the past, ’95 through 2005, we kind of made those changes on and off, didn’t really see a big change in it.  After reviewing some video of our car and Jack’s car, his car was definitely leaving the starting line different than ours.  I believe Monday night of Indy, we got together at JR Todd’s house, called the header manufacturer, said, ‘Hey, we’re missing something here’.  Our car is fast, but Jack has five-hundredths on us, we need to do something.  He built us some headers.  I’m not sure if he built Jack’s headers or not.  But they were more of Jack’s design.  We put them on in Charlotte and it definitely was the missing key.  Instant results from that point forward.

“Really all season long, we were building this combination, the team was getting together, and we were making final rounds.  I made the comment multiple times a real goal of ours, especially at the beginning of the season, was just to get to the finals with an opportunity to win the championship.  The opportunity that if you win the race, you could be the Mello Yello NHRA champion was ours.  We accomplished that, got there.  If we win the race, we will be the champions, I believe.  It’s just kind of in our hands.”

If Worsham claims Funny Car championship, he’ll be looking at the payoff of 25 years of effort in the Funny Car division.

“It will definitely be pretty amazing,” grinned Worsham.  “When I came into Funny Car racing, I was 20 years old, my goal was just to get a license and possibly qualify for an NHRA event.  I didn’t really start off, let’s say like Antron Brown or Jack Beckman, in a professional race, in a car that could win races or a championship.  I started off with my dad, one partner, little trailer, one car, one spare engine.  We went race to race back in the early ’90s trying to get the NHRA money, collect it, go to the next race, just learn how to qualify and win rounds.  My goals changed as the years went on.  Finally, 1997 came along.  We had a little bit of money to play with.  At that point the goal became not just qualifying for events but to make top 10 and make a run at the championship.  It would be pretty special.  From 1997 to today, when we finally have the funding to go out and race against John Force Racing for the championship, that has been going on pretty much the last 20 years of my life. “