William Byron is becoming a force in the virtual racing world. Byron is now the first multi-time winner of the eNASCAR iRacing Pro Invitational Series, holding off driver Timmy Hill by a mere .256 seconds in overtime at the virtual Richmond Raceway on Sunday afternoon.  Byron’s first win came at iRacing’s virtual Bristol Motor Speedway two weeks ago just before the Easter off-week.

Byron has been a force of nature. He dominated in total laps led (319) in the four iRacing events in his No. 24 Hendrick Motorsports Chevrolet and was easily the class of the field in Sunday’s Toyota Owners 150 presented by Toyota, holding the point for 94 laps in the 154-lap race. 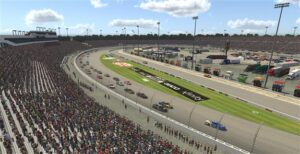 Despite several new entries this week, the Richmond race had the real competitive feel NASCAR fans have come to expect at the .75-mile oval.

And Byron, who partly got his competitive start in iRacing years ago, again put on a master class – holding off a group of competitors with fresher tires on a final race restart with three laps to go.

“I didn’t really know how that was going to work out, but luckily we were able to have a little bit of buffer to the guys with four tires, and then the late restart, just executed that well,’’ Byron said. “It was fun. Really enjoyed it. To go back‑to‑back is really cool. Having fun with it while we’re kind of in a hiatus here, but looking forward to getting back to real racing soon, too.’’

Matt DiBenedetto was parked late in the race after iRacing officials disapproved of avoidable contact he made – crashing Ryan Preece in the waning laps. It was a tough ending to a promising day for Preece, who won the pole position in qualifying and held a virtual “meet and greet” with his sponsors and fans before the green flag. He was the only other driver to lead multiple laps – his No. 37 JTG Daugherty Racing Chevrolet pacing the field for 59 laps, second only to the race winner.

Team Penske’s Brad Keselowski, had an impressive outing who kept his No. 2 Ford among the top 10 for much of the race before a pit road miscue forced him to play catch-up again in the final laps. It was only Keselowski’s 34th iRacing start compared to Byron, for example, who has more than a thousand.

Ultimately, strategy played a decisive hand in the dramatic final stretch to the checkered. A caution period with four laps remaining in regulation created an urgency for Byron. He had to hold off Hill – whose No. 66 Toyota was on fresher tires – in those frantic overtime laps.

And Byron and Hill have a virtual “history.” Byron was leading at Texas Motor Speedway when Hill moved him on a late-race restart to snatch the victory. On Sunday, it was just a clean fair sprint to the checkered.

“He raced me really clean; I was really thankful for that,’’ Byron said. “We’ve had some good races, honestly. Texas, obviously I was frustrated with Texas, but if I would have been in his position, I probably would have done the same thing, looking back on it.

“I think he’s done a really good job showing how consistent he is. I feel like he’s got good race craft, and I enjoy racing with him. I know what to expect when I race with him, that he is going to use the bumper, so I just have to race him back that way, and I think we both understand that. Fortunately, I had just enough speed to kind of keep my gap there and win that race.”

Hill, has been a very consistent finisher being the only driver with top-three finishes in all four eNASCAR iRacing Pro Invitational Series races, tweeted after the race that he was pleased with the effort, and like so many, already eagerly looking forward to the Talladega Superspeedway virtual high banks, where the series races next Sunday.

“Just came up a little bit short there at the end,’’ Hill said on Twitter. “Congratulations to @WilliamByron on the win! Looking forward to a bunch of fun at Talladega next week.’’