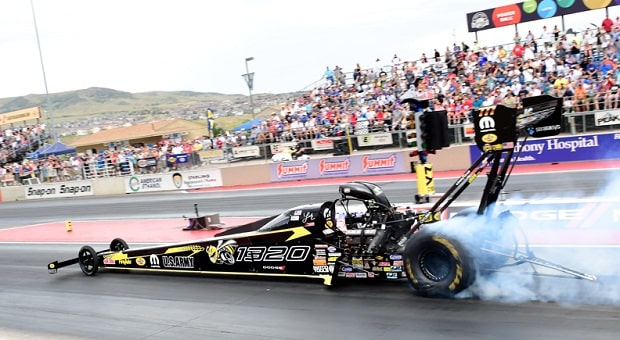 Racing at Bandimere Speedway has always been a challenge for NHRA’s Mello Yello competitors. With a full array of Top Fuel, Funny Car, Pro Stock and Pro Stock Motorcycle competitors headed to the eastern edge of the Rocky Mountains, figuring out how to tame the more than 5,800-foot elevation is a challenge worth taking.

The 40th annual Dodge Mile-High NHRA Nationals presented by Pennzoil begin the three races in three weeks Western Swing, which has competitors racing from Denver to Sonoma to Seattle. Taking a swing at any of those tracks is a lesson in adjustability; attacking all three, which applies to Top Fuel, Funny Car and Pro Stock, as the motorcycle category regularly skips Seattle, is a true challenge.

The challenges at Bandimere Speedway require more than dealing with different engine setups; typically, the raging July heat at this altitude is tough for crew members to bear, much less paying customers. NHRA wisely schedules its professional Friday and Saturday qualifying sessions in late afternoons and early evenings, thereby lessening the difficulty for fans as well as participants.

The three-race Western Swing hasn’t been swept – with a single driver in any category winning all three races – since Antron Brown of Don Schumacher Racing performed that feat in 2009. That’s a long drought in NHRA terms, as records are always meant to be broken and streaks are the stuff that keeps interest high.

Likely the only racer on-site who could possibly effect that three-race sweep is Steve Torrence, who has made Top Fuel his personal sandbox. After earning his first NHRA national championship last year on the basis of 11 victories – six of them coming as he swept the six-race Countdown to the Championship playoffs – Torrence might be able to end that drought of the Western Swing sweep.

Leading up to this race, Top Fuel has been a rout, with Torrence standing tall in the catbird seat and only Steve’s dad Billy, Doug Kalitta, Richie Crampton and Mike Salinas earning race wins apart from the Texan. He’s got 479 points in hand over full-timer Kalitta and Brown’s in third lagging by 497 points. Brittany Force holds fourth (-501), followed by Salinas (-546), Clay Millican, Leah Pritchett, Crampton, Terry McMillen and Scott Palmer, completing the top ten, Palmer a full 715 points behind Torrence.

The most recent race at Epping, NH was notable as much for who wasn’t on the grounds as it was for who won – Torrence. Neither Leah Pritchett, driving for Don Schumacher Racing, nor Mike Salinas in his family-owned and Alan Johnson-tuned Scrappers rail, made the trek to New Hampshire. That brought the car count down to 13, and this weekend’s field is – at press time – 15 dragsters, which doesn’t excite many fans fixated on the top rung of drag racing.

Fortunately, few of the Top Fuel dragsters that will be on-site could be considered field-fillers, including a healthy rookie crop of entrants: Jordan Vandegriff, Austin Prock and Cameron Ferre. The bloom of youth is on Top Fuel and that’s good for the sport, even if the No. 1 qualifier grabs a bye in Sunday’s late-morning first round of eliminations.

There is a propensity for winners to come from this event’s sponsor; there was a time when Bandimere was called “Johnson Mountain” because Allen Johnson’s Dodge cars had a lock-hold on Wally winner’s trophies in Pro Stock competition on this racetrack. Pritchett, driving her Dodge MOPAR Angry Bee dragster, is hoping to extend that mantle as the defending victor at the track. “I’m beyond motivated,” she said. That could spell trouble for Torrence – trouble every other Top Fuel racer would find just fine.