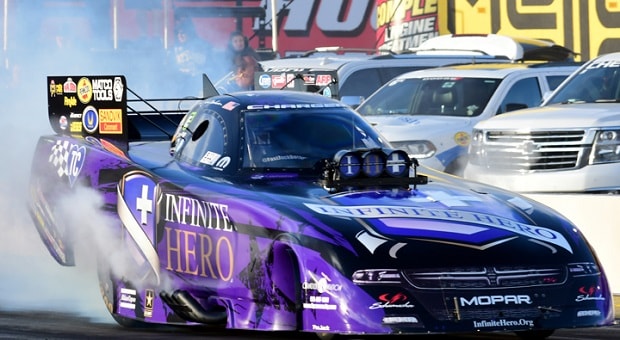 The 2018 NHRA Mello Yello Drag Racing Series season marks only the second time 2012 Funny Car champion Jack Beckman has started the year with the same Don Schumacher Racing crew with whom he ended the prior season.

The first time he carried over his team came from 2011 to 2012 with a Rahn Tobler-led crew, but team owner Don Schumacher decided to make changes about a third of the way through the year and Todd Smith came on to be crew chief for Beckman. By the close of the year, they’d won the playoff Countdown to the Championship and secured the Funny Car title.

Since winning that singular championship, Beckman’s had a rotating set of crew chiefs and crew members – when Tobler departed, he took the group that currently preps Ron Capps’ Dodge Charger R/T in the Schumacher camp – until last year, when John Medlen, Dean Antonelli and Neal Strausbaugh settled in to determine the direction of the Infinite Hero car.

The continuity has been great for Beckman and his team, as they competed in last season’s Countdown to the Championship, starting and finishing the six-race playoffs that determine final standings in fourth place, all the while gyrating through the standings with some good, some so-so results. Still, they stuck together and emerged as a cohesive group.

But then they had a puzzling official pre-season test as they prepped to meet new header regulations (40 degrees max angle) and rev limiter rules (7900 – same as Top Fuel). Unable to make it down the track with their primary car in seven attempts, the team stayed an extra day, pulled a new car from the trailer, got their clutch disc issue settled and finally got the car to react as they wanted.

That showed in Pomona at the Lucas Oil NHRA Winternationals that started the current campaign. Beckman qualified No. 3 for that event and went as far as the semifinals before falling to eventual runner-up Robert Hight of John Force Racing, the reigning and two-time Funny Car titleholder. 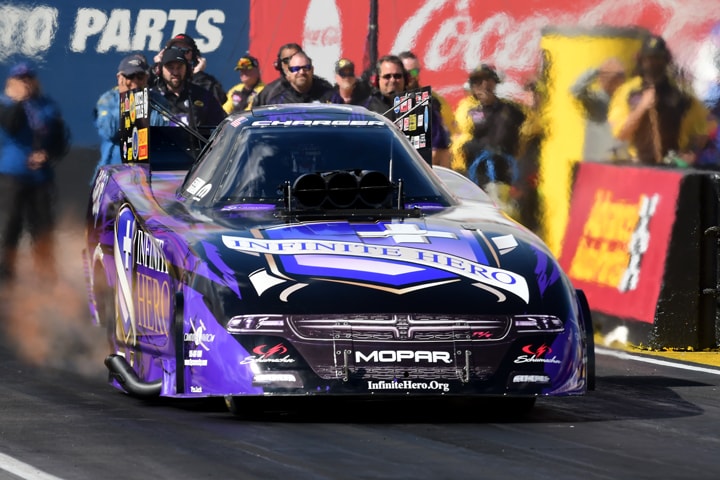 Now, at the NHRA Arizona Nationals on the Wild Horse Pass Motorsports Park dragstrip outside Phoenix, Beckman looks poised for a great season. The team his car owner put together appears to be happy working together, Beckman’s car is fast and reliable and the results, again, are showing.

The chilling temperatures on Friday are expected to continue through the weekend in the Valley of the Sun, and that could provide this Terry and Doug Chandler-supported team with the impetus they need to start mounting a viable championship attempt from their current, yep, fourth position.

“We got one point for being third-quickest of the first session,” Beckman said. “I thought that was great, but then to come back and back that up, we actually tied Courtney for low E.T. and got it on speed. I like the fact that we were able to make back-to-back runs like that,” the three-time Phoenix winner said.

“Usually, if you have conditions like this you say, ‘We won’t race in these conditions.’ Those hero runs on Friday night are kind of throwaway of data for crew chiefs because you won’t see those conditions again,” Beckman reminded. “But I think we’re going to see them [Saturday] and again on race day. What makes me feel confident is we have great data that we’ll probably be able to use again in the next two days.”

For a student of the sport like Beckman, a man who has taken a career in the military, a bout with cancer and a rotating staff to success in his sport, this kind of enthusiasm doesn’t always come easily. He’s also likely hoping his team owner doesn’t get a bug up his rear and shake up this happy team anytime soon.