IMSA conducted the third in its Michelin Endurance Championship events on the Watkins Glen International road course this past weekend. it also presented the fifth race in its IMSA Michelin Pilot Challenge on the challenging road circuit that has served as site of the United States Grand Prix Formula One race in the past.

The six-hour WeatherTech race went to the Wayne Taylor Racing Acura team of Ricky Taylor and Filipe Albuquerque, who led the Meyer Shank Acura team of Oliver Jarvis and Tom Blomqvist to the checkered flags by a scant 0.861 seconds. But attention swayed to the Saturday Tioga Downs Casino 120 contest in IMSA’s Michelin Pilot Challenge, which was won by the No. 33 Bryan Herta Autosport Team’s Hyundai Elantra N TCR, driven by Canadians Mark Wilkins and Robert Wickens.

Yes, that same Robert Wickens, who suffered spinal cord injuries in an INDYCAR race on the Pocono oval in 2018. The Arrow McLaren SP driver has climbed back from that devastating accident and into a hand-controlled Hyundai and made it first to the checkered flags in the double-class contest. Overall win went to Bill Auberlen and Dillon Machavern in their Turner Motorsports BMW M4 GT4 in the 52-lap contest.

Wickens has spent the last four years preparing for this day. His belief that he could overcome the difficulties dealt him in the horrific accident are legendary. After surviving the crash, Wickens has also overcome the surgeries that have been necessary to keep him alive and has prevailed in the physical therapy that might have humbled a lesser person. But race drivers. They’re something else, aren’t they?

Wickens returned to the driver’s seat this year and, this past weekend made his first visit to Watkins Glen as a competitor. This was his fifth race using hand controls. While the accident claimed the ability to use his legs in a race car, Wickens’ focus has always been forward. His determination to claim racing victory has never dimmed. 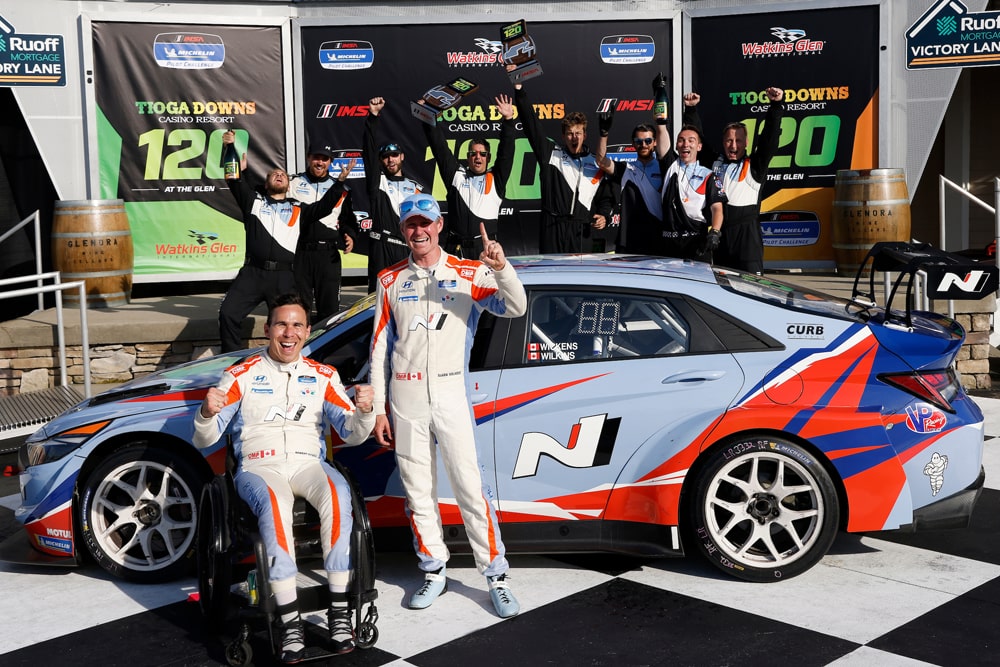 “Anytime I compete, I compete with the intent to win,” Wickens said after claiming that checkered flag along with his countryman. “Mark and I and the team have been working diligently to get the most out of the car and to execute clean races every weekend. To get this win is very satisfying,” even though the victory hadn’t really sunken in until much later.

Wickens started the two-hour race from third position in class, on the TCR second row. He took the lead on the 18th lap and had a 10-second lead over the TCR field when he came in for his second stop and to perform the driver swap to Wilkins for the final 55 minutes. Despite cautions in the final hour and a challenge from the No. 5 Alfa Romeo Giulietta Veloce, Wilkins held on for the historic win. By a scene 0.374 seconds.

“It was stressful watching Mark in those final laps,” Wickens said. “He did a mega job. It’s just an awesome, awesome day and I don’t think it has sunk in yet. I really enjoyed the race in my stint and we really had things under control.” While admitting he’s “not much of an emotional guy, I was just trying to have my moment to myself. Really, start to finish, this was by far our most complete race we’ve done. So, to get rewarded at the end with a victory was the cherry on top.”

While Wickens and Wilkins celebrated on Saturday, they’re already looking forward to the sixth race of the season, which takes place in less than a week. The Canadian Tire Motorsports Park 120 on Canadian soil is set for next Saturday, the Michelin Pilot Challenge’s first visit to the track in Bowmanville, Ontario, since 2019.