The dynamics of NHRA’s Mello Yello Drag Racing Series are changing. In recent past seasons, the competitive juices have seemed to flow more within teams than in the pits. There were mega-teams involved here, like Don Schumacher Racing (DSR), which had a stranglehold on Top Fuel and Funny Car categories. Summit Racing has held sway in Pro Stock, much as Elite Motorsports did for several years. Vance & Hines’ Pro Stock Motorcycle mastery has been rebuffed only a few times.

This year, however, DSR are languishing in what, for them, could be called true doldrums. In 2017, by the time the eighth race of the season was complete, the team had a total of five “double-ups” wherein one team member won Top Fuel and another brought home the Wally trophy in Funny Car. After eight races last year, 2016 flopper champ Ron Capps owned four victories on the year.

Looking at this year, DSR has zero double-up victories on the season. Only three Schumacher entries have won races: Matt Hagan at the season-opening Winternationals, Jack Beckman at the Gatornationals and Leah Pritchett at Atlanta. For DSR, that’s a drought.

John Force Racing (JFR), thanks to Courtney Force’s triple step-up to the Winner’s Circle, is in the Funny Car catbird seat. Courtney has driven her Camaro SS to victory at Phoenix, Atlanta and Topeka, the most recent race. She’s had to contend with Kalitta Motorsports’ JR Todd, who has won back-to-back races (Las Vegas Four-Wide and Houston). Cruz Pedregon’s Toyota Camry has shown signs of life and the car owner/driver currently holds eighth place standings after winning at Las Vegas’ Four-Wide show in early April.

Brittany Force, the reigning Top Fuel titleholder, is starting to emerge from the accident at the Winternationals and has a single Wally to er credit this year, secured in Houston. She’s facing perennial front-runner and current points leader Steve Torrence, who has three victories on the season, and Clay Millican, who earned his second career Wally in Topeka. 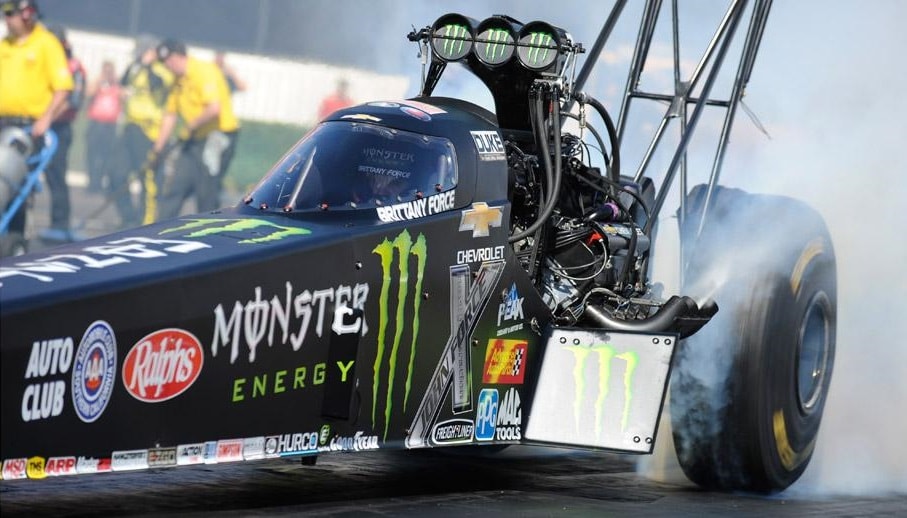 Top Fuel racer Millican, who didn’t win an NHRA contest until last year’s Bristol race, collected again in Kansas and is now a threat at every racetrack the series visits. Eight-time dragster champ Tony Schumacher is still looking for his first win of the year (as part of the DSR doldrums), yet retains third place in the standings with his consistency.

While he often has a hot hand, reigning Funny Car champ Robert Hight has not earned a Wally yet this year and stands fourth in points; neither has team leader and 16-timer champion John Force, who is hoping to start this stretch of four races in four weeks with a win. After starting the season with three explosions in three consecutive races, Force is looking to stay on the ground in the groove and collect a fourth win at the Joliet racetrack this weekend.

After sitting out the final races of 2017, Vincent Nobile is hot, hot, hot. He has two victories in Pro Stock – the only driver to win more than one – and is leading Summit Racing’s Greg Anderson, who is winless this year. Also winless is Jason Line, ninth in current standings. Nobile’s stablemate Erica Enders-Stevens lies third, while first time winner Deric Kramer holds fourth place points after his Topeka victory. Reigning champ Bo Butner has a single victory. The entire top-10 in Pro Stock races Chevrolet Camaro-bodied cars.

Pro Stock Motorcycle has conducted only three of their 16 races this year; reigning champ Eddie Krawiec leads the points with his Screamin’ Eagle Harley-Davidson, having secured two of those  victories, while Jerry Savoie has the other and lies fourth behind Krawiec’s teammate Andrew Hines and Scotty Pollacheck.

This weekend offers DSR, JFR and the balance of the teams and drivers the opportunity to change the course of the season-long battle. While temps will be on the mild side and no rain is predicted, will this be the first DSR double-up, or will their fortunes remain the same? Can John Force regain form along with his daughters? We’ll have to wait and see.