The Martinsville race weekend kicked off with NASCAR telling teams and broadcasters to hurry things up because rain was threatening. Rain held off for 24 laps, at which point the race was stopped and postponed until Sunday after the Cup race. Snow overnight then caused both races to be further put off until Monday at noon. John Hunter Nemechek prevailed in the NASCAR Camping World truck Series Alpha Energy 250, while Clint Bowyer surprised the crowd with a rare win in the Monster Energy NASCAR Cup Series STP 500.

The first two stages were basically the Ben Rhodes show. The truckers were able to get 24 laps in before NASCAR shut things down for the night because of rain. The race was supposed to have been restarted Sunday afternoon, but several inches of snow on the ground precluded that. Ben Rhodes, in the ThorSport Racing Number 41, teammate Matt Crafton in the 88 and ThorSport teammate Grant Enfinger in the 98 combined to put on a good battle for the lead for several laps in the middle of the first stage, which was won by Rhodes

Stage 2 also saw good battles up front and throughout the middle of the field. This action caused a couple of wrecks during the stage, allowing everyone to calm down and work on their trucks. Although there was action at the front, making it exciting, Rhodes was again able to prevail for the Stage 2 win.

A five truck wreck again brought out the caution 19 laps in the final stage. A loss of power caused the 21 of Johnny Sauter to be hit and taken out of the race by the 88 of Matt Crafton. Brett Moffitt drove his Hattori Racing Enterprises Number 16 Toyota up to fight for the lead with seven to go. John Hunter Nemechek was able to get his Nemco Motorsports Chevrolet past Kyle Benjamin’s Number 54 Crosley Brands/Foothill Capital Toyota for the win, with Moffitt coming in third. 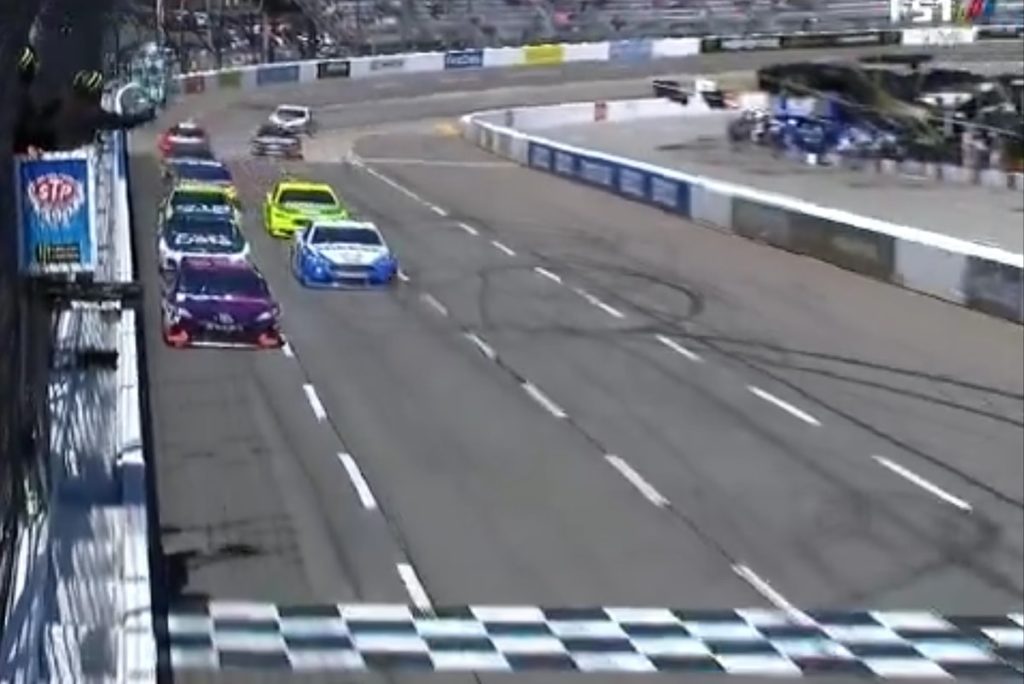 Rain washed out Cup qualifying on Saturday and snow whited out the race on Sunday. When Mother Nature finally relented and allowed the cars on track Monday, NASCAR lined them up by owners’ points, with several cars going to the back due to “unapproved adjustments” (like changing an engine) or going to a backup car. The weather also caused NASCAR to call for a competition caution at lap 50.

JGR teammates Denny Hamlin in the Number 11 and Kyle Busch in the 18, along with Kyle’s brother Kurt in his Stewart-Haas Number 41 Ford, collaborated with Team Penske teammates Joey Logano in the Number 22,  Number 2 with Brad Keselowski, and Ryan Blaney in the 12 to put on a nice show for the stalwart crowd. Martin Truex, Jr and his Furniture Row Racing Toyota sat on the pole, but he faded quickly. Hamlin took the Stage 1 win, while Keselowski came in second and Blaney took third. 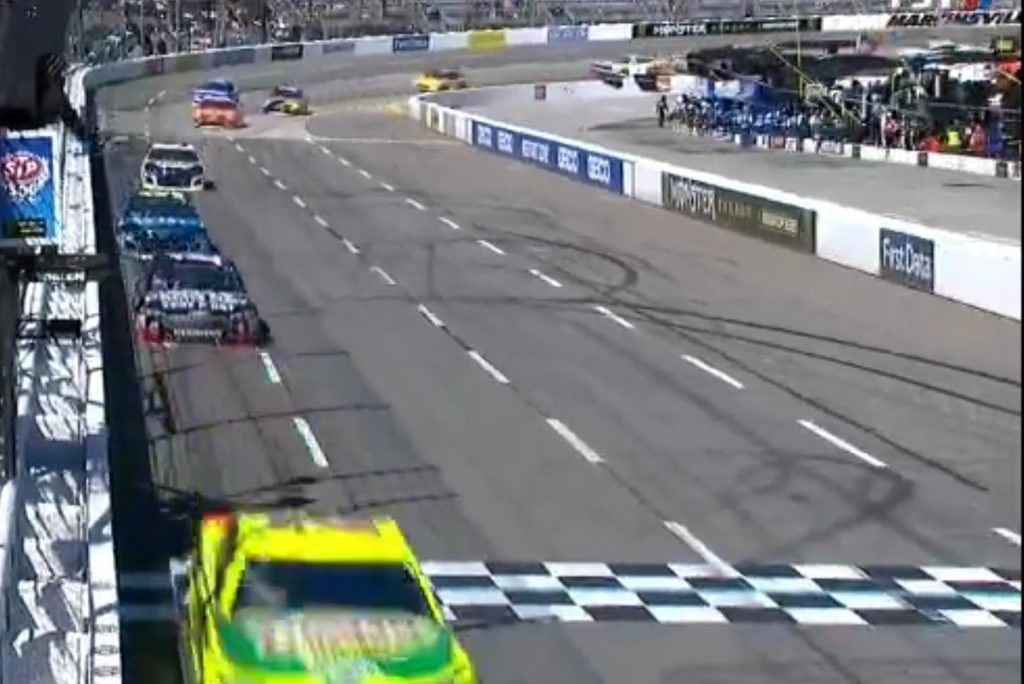 Stage 2 was more of the same, but with a surprising twist. Clint Bowyer muscled his way to play with the lead group in his Number 14 SHR Ford. The stage was broken up by a couple of caution flags brought out by drivers mid-pack banging fenders, although they didn’t involve more than one or two cars. Ryan Blaney drove his Number 12 up to the front for the stage win, followed by Bowyer and Kyle Busch. 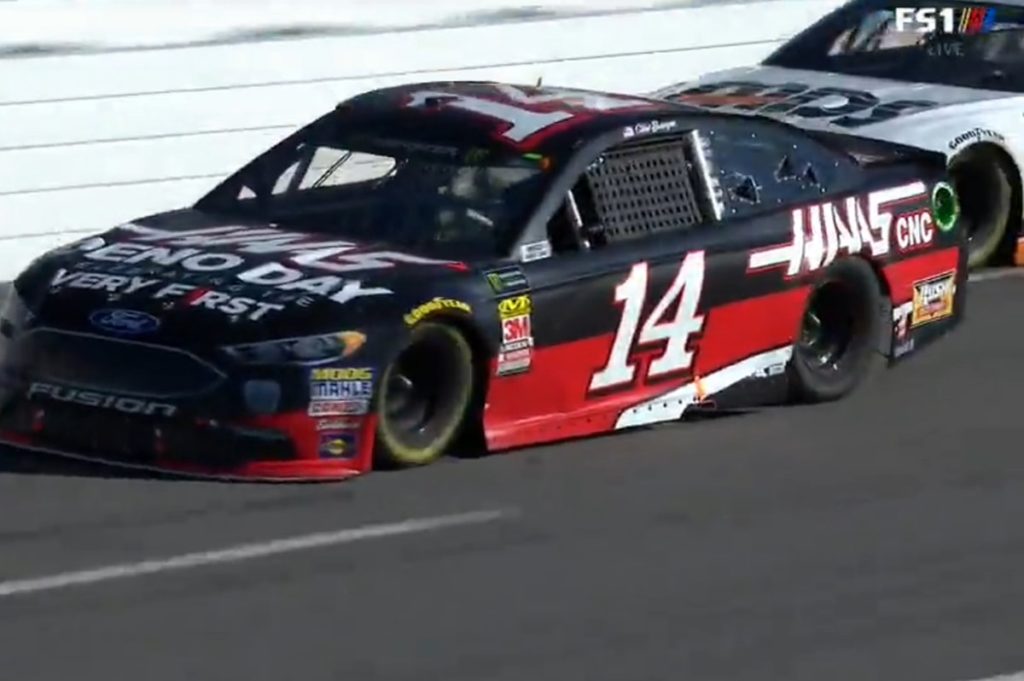 The lead was traded around a few times in the closing stages of the race, but Bowyer was able to hold on for the win. Rowdy came in second and Blaney finished out the top three. The leaders set a blistering place, only leaving 13 on the lead lap when the checkered flag waved. There were seven different leaders with 12 different lead changes.

Every race so far this year has had at least two or three teams penalized for lug nut violations. Last weekend’s race at Auto Club Speedway was the exception to this rule. Kyle Busch’s JGR Number 18 team was the only Cup team penalized after the race. Busch’s car was found to be in violation of NASCAR Rule Book Section 10.9.10.4 in that one lug nut was found to be loose after the race. Adam Stevens, Busch’s Cup crew chief, was fined $10,000 as a result of this penalty. The Number 18 XFINITY Team of Ryan Preece (who finished 9th) was also found to have a loose lug nut. His crew chief, Eric Phillips, was fined $5000. No suspensions were announced.