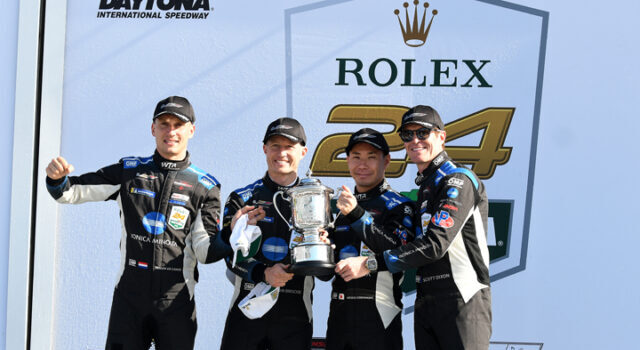 Wayne Taylor Racing (WTR) secured overall victory in the 58th Rolex 24 at Daytona on Sunday afternoon, basking in the warmth and sunshine of Gatorade Victory Lane at Daytona International Speedway.

It was the third win in four years for WTR, but the first for this team’s owner without the driving benefit of sons Jordan and Ricky, both of whom defected to new IMSA rides over the past two seasons. Jordan is now racing the No. 3 Corvette Racing mid-engine C8.R while Ricky is in his second year at Acura Team Penske, driving in the same IMSA DPi category where WTR has been such a powerhouse over the past half-decade.

With Kobayashi at the helm of the team’s Cadillac DPi, the No. 10 crossed Daytona’s timing stripe after completing an historic 833 laps of the 3.56-mile road course/oval. Only three cars finished on the lead lap, the other two being the pole-winning Mazda of Oliver Jarvis, Tristan Nunez and Olivier Pla, together with Mustang Sampling Racing/JDC-Miller MotorSports-entered Cadillac with Sebastien Bourdais, Loic Duval and Joao Barbosa driving.

The top eight finishers were all racing in the premier DPi category: the No. 6 2019 class championship-winning Acura Team Penske car was fourth, followed by the No. 85 JDC-Miller Motorsports Cadillac, Mazda Team Joest’s No. 55, Whelen Engineering Racing’s No. 31 Cadillac and the second No. 7 Acura Team Penske prototype, with Ricky Taylor part of that squad. 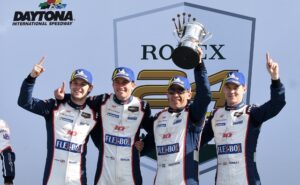 This particular race was the polar opposite of the one that occurred in 2019, where rain caused red flags and attrition was the name of the game. With an earlier start to the contest, at 1:40PM EST opposed to the two-hour-later start last year, there was more daylight running for the troops, keeping competitors on the road. But, still, the overall result was the same as 2019, with Taylor and his drivers rejoicing as they came home first.

It wasn’t as easy as it looked yet, leading up to the final hour the No. 10 Konica Minolta Cadillac had a one-lap advantage on the pole-sitting No. 77 Mazda Team Joest entry, which had to consider their overall result an excellent placement. For once the team had few of the difficulties it had experienced last year and the year before.

There were only 33 caution laps (well less than two hours total) over the 24-hour ordeal and the 833 laps turned amounted to 2,965 miles, both race records.

The No. 10’s biggest hiccup came with a pit road penalty, occurring as the race still had almost five and a half hours to run, when Briscoe ran a red light at pit exit, forcing him to perform a stop, go, hold maneuver the next lap around. After being held at track entry for 60 seconds, the Aussie lost his lead to the No. 5 Mustang Sampling Cadillac, but would regain it during a round of pits stops shortly before 10am.

“Just keeping it on the track [was the key],” Briscoe commented. The former Indy car ace noted, “Kamui did a fantastic job the last two-and-a-half hours. We knew the car was fast. We were just relieved there were no yellows at the end so we could maintain the lead.” Kobayashi had a margin of 1 minute, 5.426 seconds at the close, keeping the Mazda from Victory Lane. 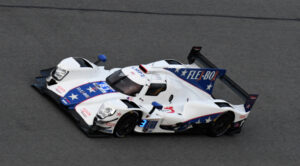 Elton Julian’s DragonSpeed USA team moved its drivers around this year, putting the team’s overall lead driver Ben Hanley, who drove in last year’s Indianapolis 500, as lead driver for this event. The No. 81 ORECA, with its traditional front-to-rear stars and new FlexBox partnership, had a two-lap advantage over second-placed No. 52, the class pole winner with American Ben Keating driving. Keating, it should be noted, was racing this car and the No. 74 Riley Motorsports GTD-class Mercedes-AMG GT3. They finished 11th in class after mid-morning issues.

The No. 81 ORECA had American Colin Braun, Briton Hanley, Harrison Newey (UK), the son of famed race car designer Adrian Newey and Swede Henrik Hedman, driving for his third time at this race. Braun, who has plenty of experience in the Rolex 24 summed up the experience well: “Ben drove the wheels off the thing. The guys had great pit stops and great strategies all day. When you execute like that, and make no mistakes you’re usually rewarded with a victory.” Hanley called it “a long 24 hours – that was a long last hour,” which he drove. “Those last 18 laps took forever… “

The No. 52 was the rabbit in this class, but it was the No. 81 that prevailed when the other car had issues. Still, Braun considered Keating one of the toughest competitors out on the track.

There were eight DPi prototypes in the 38-car field and five LMP2 cars. IMSA separated the two classes this year in order to attract more LMP2 entries; we’ll have to see if that works out for them. But one thing for sure, having all eight of the Daytona Prototype International cars finish the 24 hours leading the balance of the field was a good sign; four of five LMP2 cars finished in order behind the DPi entries.

Now they’ll all return to their bases and prepare for the next endurance contest and the one that attacks cars and drivers even harder than the Rolex 24 at Daytona. Super Sebring is on tap for mid-March and there’s really not much time to recover and prepare for the Mobil 1 12 Hours of Sebring.