Mountains in the distance, palm trees hither and yon, a magnificent horizon broken only by the advents of man—all very well fit to ponder here in Big Sky Country. In this instance, it was but a backdrop. The roar of American iron needs no accompaniment, but when others heed the call, it is a mighty chorus. 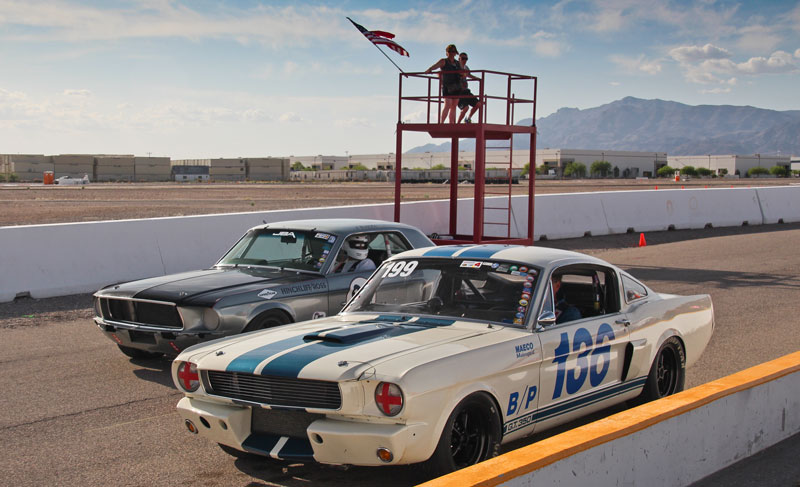 This was racing in its purest form. A race run merely for the sake of it. Three days of open track opportunity culminated in this point, where vintage Shelbys would run alongside Trans Am legends and modern muscle for the checkered flag. No trophies, no timed laps, no crowds to cheer them on. Just men and women born to race, who traveled hundreds of miles to do so, and are finally about to do it here, at the zMax Proving Ground in the Las Vegas Motor Speedway compound. Nothing could be more pure than that. And, nothing certainly was more pure in Sin City on this day.

An exhibition race among driving instructors, the display of their expertise garnered interest from their fellow racers. And, though they’d been at the track all day, every day, for three days, an eagerness to see who would be champion overtook them.

In such a race, when the cars are valued at well over the six-figure mark, racers are often restricted in an effort to preserve their cars. In that regard, today would be no different; there would be no trading paint. However, passing was allowed, and, with cars exceeding 120 mph in the straights, this certainly added to onlookers’ enthusiasm.

The cars seemingly lined up in random order as each driver responded to the announcement. Perhaps it was Freudian, but ultimately they were stacked in order of value, with a genuine ‘66 Shelby GT350 and a ‘68 Trans Am Mustang GT—each with proven racing heritage—leading the charge.

Even though they couldn’t truly overtake in the corners, because contact means you will not be invited back for 13 months, the straightaways saw some fierce competition from each contender. Lap times averaged at the two-minute mark.

The best show by far was the fight for first by friends and friendly rivals, Mike Eisenberg of MAECO Motorsport in the Wimbledon White vintage Shelby GT350 and James J. Bittle of JBA Racing in the silvery grey ‘68 Mustang GT, also known as the Silver Mink. For five laps, they doggedly jockeyed for the win, swapping the lead after almost every hairpin. Just when it seemed one could predict the outcome, the other car would be out in front.

Likewise, there was fierce competition mid-pack, with the modern muscle of Shelby GT500s and Boss 302s charging hard for third against a ‘96 Mustang Cobra SVT and ‘07 Shelby GT. It was really two races at once, but only one could take home bragging rights. The little Cobra SVT did well to maintain 3rd place the first couple of laps, but eventually succumbed to the might of its bigger brethren. When the checkered flag waved, the Silver Mink won it by a nose. Cheers and applause came from the fellow racers and their families as the cars rolled in from the track. It was a fine finish to a grand event, one known only to a few—until now. 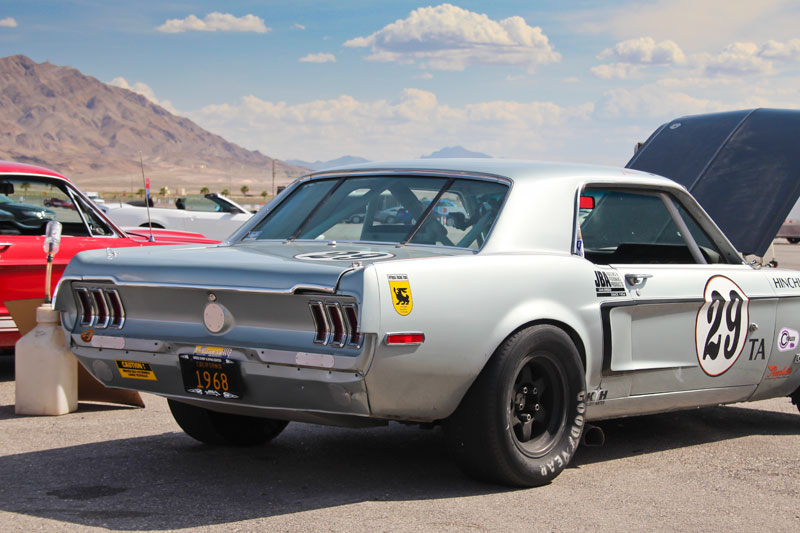 About the Victory Car:
The Silver Mink 1968 Mustang GT is a very rare and historic race car. It competed in over 20 professional races in ’68,’69,’70 in both the SCCA Trans AM pro-racing series and the Grand AM racing series by NASCAR. The owner/builder/driver was a Ford engineer Ed Hinchliff.  Owner J. Bittle discovered the car and restored it. It runs the original 1968 Ford 302 Tunnel Port (425HP) engine and a top-loader 4-speed. It also features magnesium wheels. Since the Bittle family restored it, J. has raced it for 10 years in historic/vintage road racing from the Midwest to the West Coast. Last year at the SVRA National Championships in Austin Texas at COTA the new F1 track, J. finished in 5th in class of 18 cars in Trans AM and 15th overall of 56 competitors in the Big Bore Group 6. Find out more about this car, or have them make you one just like it at JBARacing.com.

Smokin’ Shelby Burnout
Upon assessing The Burnout’s logo on our business card, J. Bittle offered to show us his vast Shelby collection and do a burnout for our cameras. The red 1967 Shelby GT500 featured in the video below was purchased in 1975 for $800.00 and is still raced by him today. It has a 427 Tunnel Port with a Doug Nash 5- Speed and 3.00 gears. To quote J, “It is an un-restored ‘warhorse.’ ”

Special thanks to Lynn Elliott for the additional burnout footage below: