Chris Dyson is no one-trick-pony. Born into a racing family (his father, Rob, was a regular on the IMSA trail), Chris began his competitive career racing dirt go-karts. He’s been a champion in the American Le Mans Series (ALMS), run the 24 Hours of Le Mans three times and has the kind of stellar road racing resume others strive to achieve.

Still, Chris Dyson wants more. Last year he began his Trans Am career and quickly took to the muscle-car competition. But even before that the lanky Dyson began a transition to USAC, driving sprint cars and midgets on dirt. He’s worked hard to develop those skills and is ready to apply them to pavement. 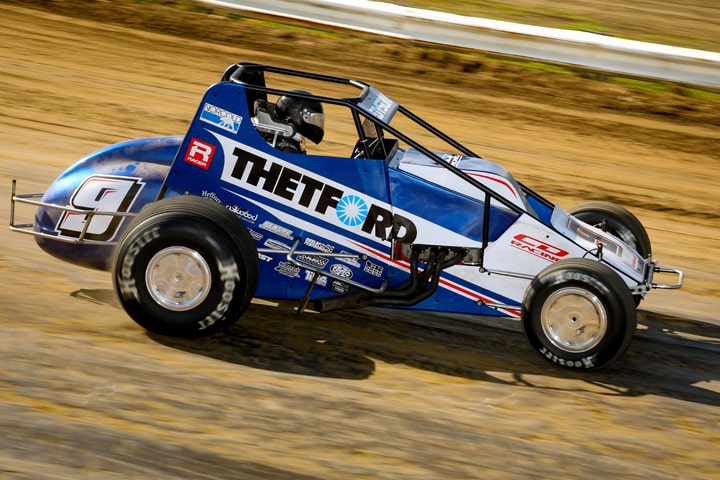 “I really enjoyed running the dirt races last year when my other racing commitments permitted,” Dyson said. “We made good progress over the course of the season, so it made sense to add the pavement races to our 2019 schedule.”

Dyson’s Silver Crown dirt/pavement schedule has only two conflicts with his Trans Am commitments and he believes there may be a solution in both cases. Technical rules for pavement and dirt Silver Crown cars are quite similar, yet the demands for racing on the two surfaces mean that, other than engines, there are essentially no interchangeable components between the two car types.

CD Racing hired Sean Michael to prepare and field the CD Racing Silver Crown champ car, sprint car and midgets. The crew chief’s two assistants have spent a total of about 1,000 hours over the past three weeks assembling and preparing the No. 9 pavement car. The prep work ensued after the team’s appearance at the USAC National Sprint Car season-opening Winter Dirt Games X in Florida.

Silver Crown racing hasn’t had its customary following for the past few years, making it difficult for CD Racing to find parts for the build.

“The parts aren’t as readily accessible for a Silver Crown car as they are for sprint cars,” Sam Michael admitted. “The situation is getting better as the series gets stronger, but it’s still more work than for a sprint car.

As Dyson’s team preps his new pavement car, the versatile owner/driver is speaking up about the differences he is expecting between the sprint car and Silver Crown machine.

“The cornering forces are bigger on pavement, which is something I’m used to,” Dyson said. “Otherwise it will be interesting to see the similarities and differences in setting up the pavement car versus the dirt car. I’m eager to get out and run with some of the experienced guys and learn as much as possible. Fortunately there’s an open practice session Friday afternoon, so we’ll have the opportunity to shake down this brand-new car and work on setup before we go racing.”

Chris Dyson and CD Racing are looking forward to making strides between Friday’s open session and Saturday’s practice and qualifying in preparation for the Memphis 100 race. The Silver Crown cars have always intrigued Dyson.

“I love oval racing and one of the central appeals of Silver Crown racing is the races are long. You have to look after the car and track changing. I think that all of those things line up with the disciplines that I’ve done in road racing,” Dyson said. “Although it’s certainly a different circuit configuration, you’re using the same skill set.”