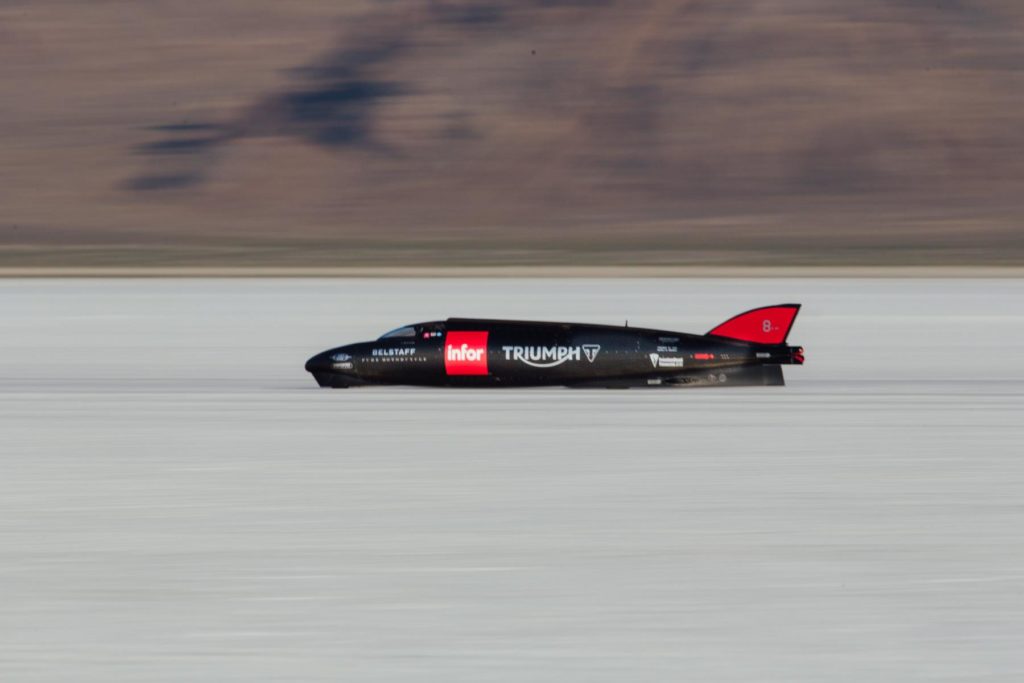 Triumph Motorcycles has confirmed that TT star Guy Martin will pilot the Triumph Infor Rocket Streamliner on the Bonneville salt flats mid-September of this year in an attempt to set a new outright motorcycle Land Speed World Record. The vehicle has already achieved a speed of 274.2 mph at a practice session on the flats, becoming the world’s fastest Triumph ever, but it will have to beat a much greater speed on an 11 mile-long course to set the record – 376.8 mph. The team hasn’t yet attempted a top-speed run due to the condition of the salt on the course, and have chosen the September dates in hopes that they will provide optimal course conditions.

Martin piloted the motorcycle during the practice session runs, and achieved all the goals set by Crew Chief and Triumph Infor Rocket Streamliner designer Matt Markstaller and his team. When asked about returning in September, Markstaller commented: “We achieved a great deal during our test week at Bonneville and feel we are in a great position to move ahead with our record attempt. Guy settled into the streamliner very quickly and impressed us with the speed in which he mastered both the motorcycle and riding on the salt.”

Markstaller still feels there is room for improvement in terms of course conditions. “When chasing a record such as this on two wheels the conditions have to be the very best they can be, to give us the greatest chance of achieving the speeds we require to set a new record,” he said. “We feel that waiting a few further weeks will provide us with even better conditions and put us in the ideal position to make our record attempt.”