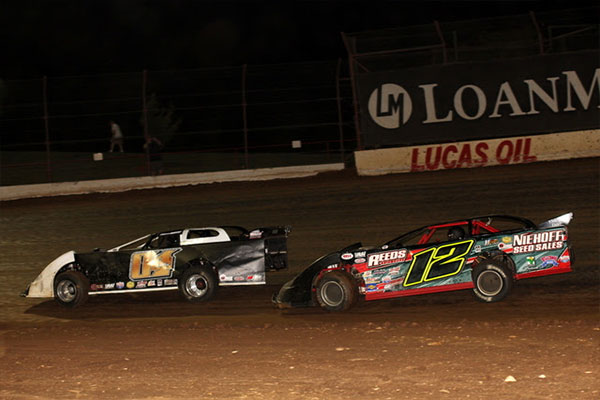 For the first time in several weeks, Lucas Cattle Company ULMA competitors took part in three separate events as the clock continued to wind down on the 2014 season championship. Racing took place at Callaway Raceway, Lucas Oil Speedway, and Randolph County Raceway (RCR) and in the end; three separate drivers brought home the racing hardware for their efforts.

At Callaway Raceway, eventual winner Jon Binning had to wait a full week to find out if he could secure his third victory of the season due to rain showers forcing the cancellation of the previous week’s main event. Binning earned the pole position through his heat race a week earlier and was in search of his first-ever feature race win at Callaway Raceway.

Binning and Chris Lapp started the 20-lap event from row one with Dwight Niehoff and Payton Looney in tow. From the onset, it looked as though Lapp would make a return visit to victory lane but Binning never let Lapp too far from his sight as the two worked to make it a two-man battle.

Binning persistently worked to the low side of Lapp and found his way to the front of the field by lap five. Lapp held strong at the front until Dwight Niehoff made his way around for the runner-up position. Contact between the two led to Niehoff slipping back in the field while Lapp maintained his position.

By the late stages of the race Binning continued to lead until 2010 ULMA Champion Vance Wilson snuck into the fray after starting tail back on the field. With the white flag waving, Wilson put heavy pressure on Binning as the two made their way through the final set of turns with Wilson up high and Binning low. In the end, Binning claimed his third win of the season by less than a car length as Wilson came away second. Lapp finished third with sixth-starting Todd McCoin coming away fourth and Ryan Petersheim in fifth.

Wilson was not present the previous week to qualify into the field, which was set through heat races the previous week; however, raceway officials allowed Wilson to compete but ULMA did not award ULMA points for Wilson’s finish. The season at Callaway Raceway is now complete. The track’s online home is found at www.callawayraceways.com.

On Saturday evening in Wheatland, Missouri, twenty drivers took part in the ULMA portion of the program at Lucas Oil Speedway during three preliminary heat races. Sixth-starting Jeremy Kelley of Walnut Grove, Missouri powered his way to the front of the field in the opening heat ahead of Payton Looney. In heat race two, Henley, Missouri’s Justin Russell out-dueled Brian Schutt for the win while outside pole-sitter and former Track Champion Tommy Cordray held multiple-time feature winner Larry Ferris at bay for the victory.

Kelly earned the pole position for the main event with Russell to his side at the drop of the initial green flag. With several cars on hand in the divisions, the track’s ultra-slick surface led to some exciting action in the race’s late stages. Russell ultimately slipped back to finish sixth but Looney, Schutt, and previous week’s winner J.D. Hubert found the surface to their liking and advanced into the top five.

Looney, who finished up the previous week in a thriller right to the finish with Hubert, was in the mix again as the young driver raced hard to close in on race-long leader Kelley, who was in search of his second victory. When the two came off of turn four the final time, Looney once again found himself in the runner-up position as Kelley secured the win. Looney recorded a solid ULMA point’s night and now finds himself in the mix for the overall championship in only his second full year!

Brian Schutt once again finished third after advancing from sixth with Hubert moving forward from ninth to take the fourth spot, rounding out the top five was former ULMA point’s leader Chris Cox of Jefferson City. ULMA racing takes a week off at Lucas Oil Speedway but drivers will return two more times to finish out the ULMA point’s earning season on September 13 and 20 respectively.

This weekend, the track hosts both the Lucas Oil Drag Boat Racing Series and the Lucas Oil MLRA as well as Modifieds when both Lake Lucas and the ‘Diamond of Dirt Tracks’ come alive over the Labor Day Weekend. For additional information including admission and schedule of events, visit www.lucasoilspeedway.com.

Quincy, Illinois’ Vance Wilson claimed the opening late model heat race by holding off RCR regular Kenny Mudd, while Chris Smyser made his second appearance of the year pay off with a win in heat race number two over Harrisburg, Missouri’s Ryan Petersheim.

Wilson, who claimed his first RCR victory of the year at the beginning of August, started on the pole alongside Smyser for the night’s main event. Wilson, a six-time ULMA winner up to this point looked strong at the front of the field. Smyser ultimately slipped to eighth in the final rundown while David Melloway of Columbia, Missouri advanced to the top three along with late-season star Cody Holtkamp of Holt’s Summit, Missouri.

When the final laps unfolded, Wilson found himself in RCR victory lane for the second time this season and seventh time overall in ULMA competition to keep things interesting in the championship hunt should Wilson choose to accumulate at least fifteen starts to his credit this year. Melloway scored a strong second-place showing with Holtkamp rounding out the top three.

The final point’s earning race of the season for drivers competing at Randolph County Raceway in Moberly takes place this weekend on Sunday evening as drivers take part in the ASCS Sprint Car weekend at the high-banked speed plant. This pairing has proven highly successful and this weekend’s action will likely follow suit in providing some of the best ULMA action of the season!

Saturday at RCR, the ASCS Warrior Region headlines the action along with B-Mods, Hobby Stocks, and Sport 4’s, then, on Sunday night ULMA Late Models join in on the fun along with ASCS Sprints, Hobby Stocks, and USRA Modifieds to close out the 2014 season at RCR. Be sure to visit www.randolphcountyraceway.com or call the track directly at 660-833-1727 for complete details.

Just five points-earning events remain in the quest for the 2014 ULMA championship. This weekend’s events take place over the Labor Day weekend beginning on Saturday, August 30 at Central Missouri Speedway in Warrensburg, Missouri, which is hosting its annual Labor Day weekend of special events, including ULMA late models. Additional information regarding car classes competing throughout the two-day weekend and purses may be found on the track’s website at www.centralmissourispeedway.net or by calling the race day hot line at 660-747-2166.

After last week’s action, Lockwood, Missouri’s Dwight Niehoff holds a narrow four-point lead over Chris Cox in second. Payton Looney is just 12 points behind the leader in third. After his win last Friday, Jon Binning now finds himself in the fourth position and mathematically still in championship contention, Zeke Langley holds down the fifth spot in the standings. See top ten standings and stats at www.ulmaracing.com.