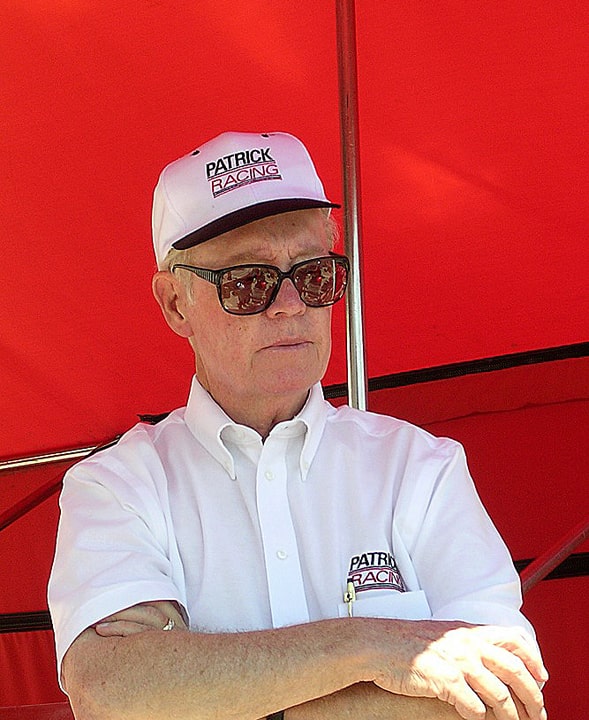 One thing you can always say about U.E. “Pat” Patrick was that he was an original. Did things his way, but was always fair, a man who treated everyone that worked on his teams with dignity.

Mr. Patrick, who died on Tuesday, January 5 at 91 in Phoenix, Arizona, sure lived a full life. Born in Kentucky, he moved to Michigan where he worked in the oil industry, hitching up with his oil field partner Walt Michner to field Indy cars in the late 1960s. It was during this time that Mr. Patrick secured the sobriquet of a “wildcatter” in the industry as he worked to strike oil. He would later name his cars the “Wildcat” chassis.

In 1970 Patrick Racing was born and went on to win three Indianapolis 500 races with Gordon Johncock (1973 and 1982), as well as the 1989 victory with Emerson Fittipaldi in a Chip Ganassi-partnered car. One of those wins, the 1982 duel where Johncock bettered Rick Mears at the checkered flags by a minuscule .16-sec, came with a Wildcat chassis built by the Patrick team. Patrick Racing claimed two national championships as Johncock secured the USAC Champ Car title in 1976 and Fittipaldi claimed the CART championship in 1989, the same year he won the Indy 500.

Mr. Patrick was inducted into the Indianapolis Motor Speedway Hall of Fame in 2016 and the Motorsports Hall of Fame of America two years later.

One of Mr. Patrick’s greatest achievements was the formation of Championship Auto Racing Teams (CART) together with Roger Penske. This duo, influenced by Dan Gurney’s “white paper” on the future of open-wheel racing, changed the course of American open-wheel motorsports forever. As CART surged, USAC deflated. CART would succeed as open-wheel racing’s prime competition for nearly two decades while USAC still sticks with its core products of front-engine midget and sprint-car racing.

Mr. Patrick was also the founder of the American Racing Series that became Indy Lights and continues to this day as the penultimate step to driving a true Indy car. For that effort, he made the exquisite decision to place Roger Bailey at the lead, and Bailey helped make the Lights series into a force that, among others, gave us the now six-time NTT IndyCar Series champion, Scott Dixon.

It was Mr. Patrick who brought Firestone back to Indy car racing, by leading a test team that prepared the tire giant for the task at hand. His crew chief, Jim McGee, was helped by the talents of driver Scott Pruett, who gave up competition in order to help prepare Firestone to take on – and eventually banish – Goodyear in the open-wheel arena.

Mr. Patrick moved to Phoenix, Arizona where he lived until his death. He is survived by three sons and a daughter.