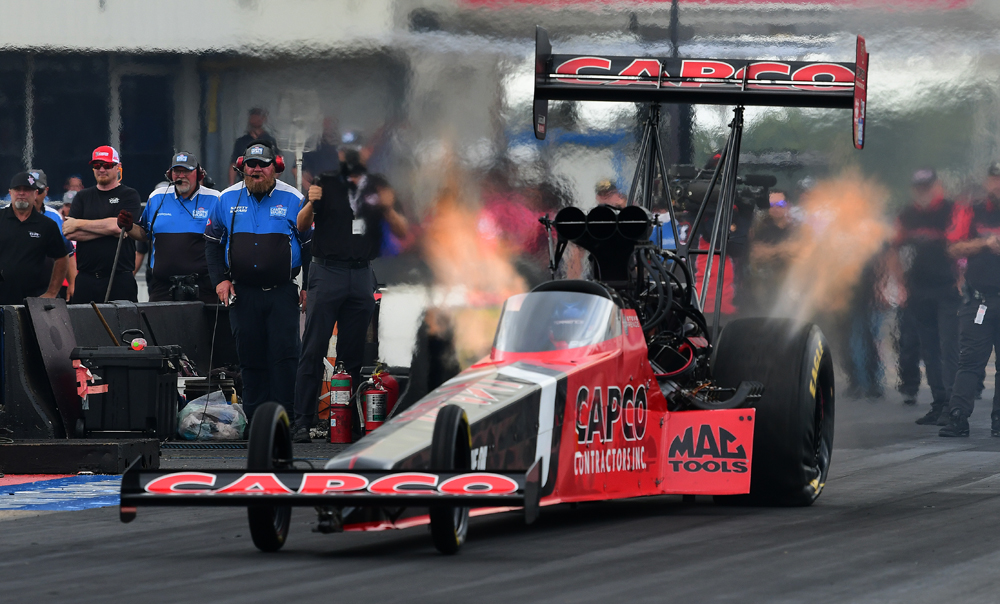 Toyota likes to align with winners throughout its motorsports activities. Every manufacturer says it gets into racing to win, and that requires relationships with the best and the brightest in every tentacle of the sport. Toyota has been a winner with every facet of racing it’s entered, whether in USAC Midgets, INDYCAR, international sports car racing, off-road endurance and sprint competitions, in NASCAR’s three touring series and in NHRA drag racing.

When the Japanese manufacturer entered NHRA nitro drag racing in 2002, it had plenty to learn. “We had zero experience,” said Dave Wilson, president of Toyota Racing Development (TRD). And so they learned by listening to officials, to drivers, to team members, making discoveries through practical experience, making errors and learning from them.

Along the way, Toyota has been partners with some of the best racers and teams in the NHRA’s Camping World Drag Racing Series nitro community. Larry Dixon, then driving in Top Fuel for Al Anabi Racing, captured Toyota’s first winner’s Wally trophy. Dixon, Del Worsham and Shawn Langdon went on to secure Top Fuel titles for that team before its demise. Toyota aligned with Antron Brown when he entered the Top Fuel nitro ranks from Pro Stock Motorcycle, and he’s now a three-time titleholder under the Toyota umbrella.

But there’s always the quest for more and better information that can translate for all Toyota teams, which is why Toyota and TRD announced an extension of their thrust into the 11,000-horsepower wars of Top Fuel and Funny Car. Before the first nitro car turned a wheel in anger during the 20th Thunder Valley Nationals at Bristol Dragway, Toyota confirmed its addition of the powerhouse Torrence Racing to its stable of over-achievers in NHRA drag racing.

“Torrence Racing is a leader in NHRA competition,” said Paul Doleshal, group manager, motorsports and assets for Toyota Motor North America (TMNA), “and we look forward to bringing Steve and Billy into the Toyota family in 2022. We have incredible drivers and team partners in the NHRA landscape. The addition of Steve and Billy Torrence will only enhance that outstanding lineup.”

The Torrence Racing juggernaut began in earnest in 2017, when Steve came close to his first title. He’s now driven to 49 victories in 263 career events and is the reigning Top Fuel titleholder, for the third consecutive year. Leading the Top Fuel standings for all but the first race of the 20-contest campaign, Steve has won nine times. Patriarch Billy has two wins in 2021 and eight overall. Despite racing a part-time schedule, Billy Torrence currently occupies fifth place in the overall and Countdown to the Championship standings.

“I’ve been blessed to have a lot of success in my NHRA career, but I feel like this new partnership with Toyota and TRD will only improve what Torrence Racing can do on the track,” Steve Torrence acknowledged. “I’ve seen first-hand that the drivers and teams associated with Toyota aren’t just part of their roster, but part of a family. They are a special manufacturer that puts people first, and that’s the type of partnership our team is excited to be part of, starting next season.” This is the first and only manufacturer affiliation for Torrence Racing.