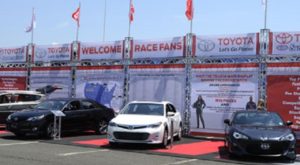 Toyota has extended its agreement to be the official car of NHRA, according to an announcement by NHRA officials.

“Toyota is such an integral part of the NHRA Mello Drag Racing Series at all levels,” said Brad Gerber, NHRA vice president of sales and chief development officer. “NHRA is very excited to have Toyota’s continued support going forward. We hope to further solidify and grow the already successful partnership NHRA has with Toyota.”

These seven teams have won a total of 142 events. In 2016, Brown won his second consecutive and third overall Top Fuel world championship. Shawn Langdon won the Top Fuel crown in 2013, Del Worsham won in 2011, Larry Dixon in 2010 and Cruz Pedregon won the Funny Car championship in 2008.

“Just like our fans, we enjoy feeling the effect of 10,000 horsepower hurtling down the track,” said Paul Doleshal, Toyota national motorsports marketing and asset manager. “Extending our official partnership with NHRA allows us to be a part of a racing community that shares our passion for motorsports. Whether it’s experiencing our PitPass display in the midway, towing our Top Fuel and Funny Cars to the grid or the support Toyota Racing Development (TRD) provides to our teams, we value our partnership with the NHRA community.”

Toyota will have a season-long presence at NHRA Mello Yello Drag Racing Series events and on television broadcasts due to their status as the official car of NHRA. The company will also receive trackside signage, jumbotron spots and bannering rights. At some events, Toyota will have an expanded presence as part of NHRA’s Nitro Alley, where fans experience a selection of interactive displays during the race weekend.