On a rather dramatic weekend in Norwalk, OH, three drivers saw a new winning streak begin to emerge. Although it seemed that this season’s Top Fuel king was unstoppable, one weekend in the mountains of Bristol would bring Steve Torrence’s 19-round win streak to a screeching halt. Despite last weekend’s final round loss, Torrence seemed to regain his composure at this weekend’s Summit Racing Equipment NHRA Nationals after taking down the legendary Pat Dakin in Sunday’s final round. Although the Bristol Top Fuel winner didn’t find his way back to the top at Summit Racing Equipment Motorsports Park, the same can’t be said for Funny Car driver Bob Tasca III, who only had to wait seven days to raise another Wally as he defeated Jack Beckman in the final round at the Summit Racing Equipment NHRA Nationals. After a prolonged hiatus for the Pro Stock Series, well-known driver Chris McGaha also earned his eighth career victory after overcoming adversity and driving to a win against Alex Laughlin in Sunday’s final round. 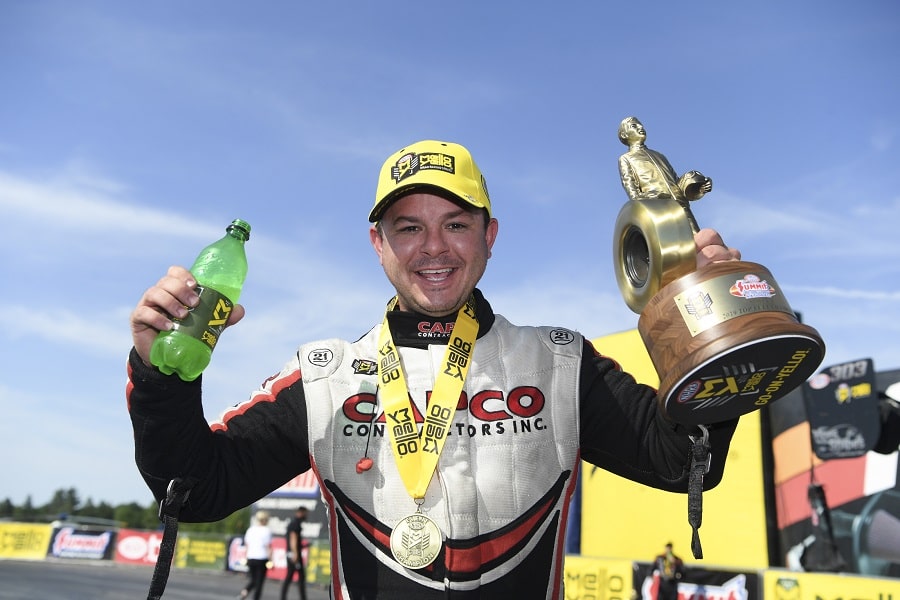 After closing out this weekend’s qualifying sessions with a string of three 3.7-second passes, Torrence entered Sunday’s elimination rounds from the No. 5 spot. Firing off yet another 3.7-second pass in Sunday’s first round sent Top Fuel rookie Jordan Vandergriff to the trailer. As track conditions continued to heat up, both Torrence and his Torrence Racing team continued to knock off the competition.

Along with taking down Kalitta Motorsports namesake Doug Kalitta in Sunday’s second round, Torrence’s 3.82-second pass against low qualifier and fellow Top Fuel world champion Brittany Force gave the reigning the world champion his 300th career round win and put him into his seventh straight final round.

While a win seemed imminent for the 2018 Top Fuel champion, being forced to take on 73-year-old NHRA senior driver Pat Dakin in Sunday’s final round could have once again left Torrence in the dust. Thanks to a convincing 3.83-second pass, Torrence was back to his winning ways.

“It felt great to be back on top,” said Torrence. “The funny thing is, I was pulling for Dakin because the guy is not only a legend but is also a really cool dude. We share a lot of the same philosophies and things; I give him crap and he gives me crap and even comes over and has a beer with us sometimes. Guess that is what really makes the latest win so special.”

Thanks to the return to his win streak, Torrence continues to fire ahead of the Top Fuel field going into New England. 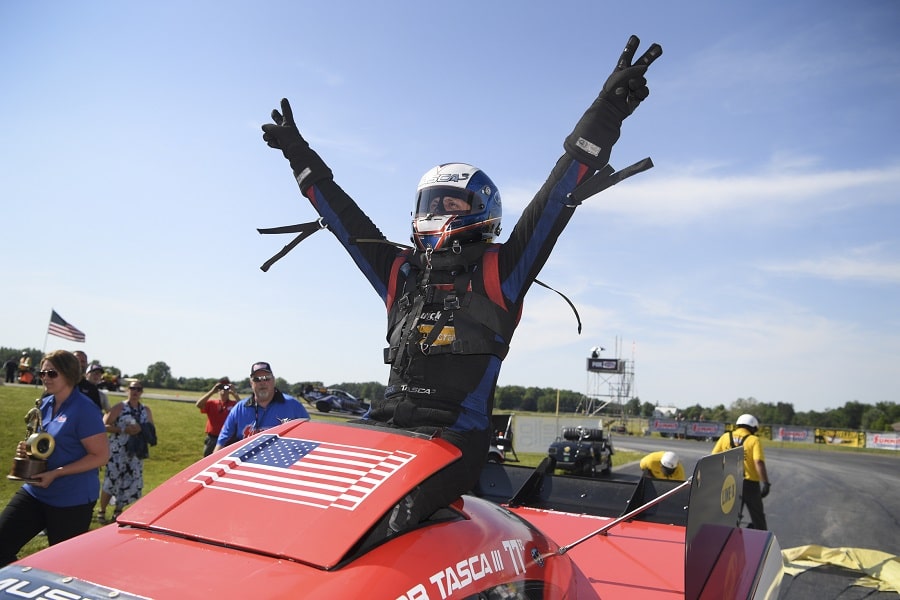 Torrence wouldn’t be the only driver to race his way to the start of a newfound winning streak. After waiting seven years for his latest Funny Car win, Bob Tasca III’s recent break back into the win column last weekend in Bristol seemed to open up a very special gift that has led to the start of a win streak for the Tasca Racing driver.

Hot off of four round wins that earned him his first Wally in seven years last weekend in Bristol, he ran nothing but three-second passes in qualifying and started the race day from the No. 6 spot against former world champion Matt Hagan. After taking down Hagan in Sunday’s first elimination round, Tasca and his team continued to knock off Paul Lee as well as the legendary John Force, whom he had to also defeat to win the Bristol title, to take on Don Schumacher Racing’s own Jack Beckman in Sunday’s final elimination round.

While Beckman seemed to be on a hot streak this weekend, this came to an end after smoking the tires early in Sunday’s final round, which gave Tasca his second victory in a row.

“I have worked a lot of years to get to this place and there were days I never thought I would get back to the Winner’s Circle,” said Tasca. “To do this two weeks in a row feels so incredibly good. In fact, it feels like a weight has been lifted.”

Along with giving Tasca III a shot at a continued winning streak, Bob Tasca III continues to race his way into the top-10 in the Funny Car points standings. 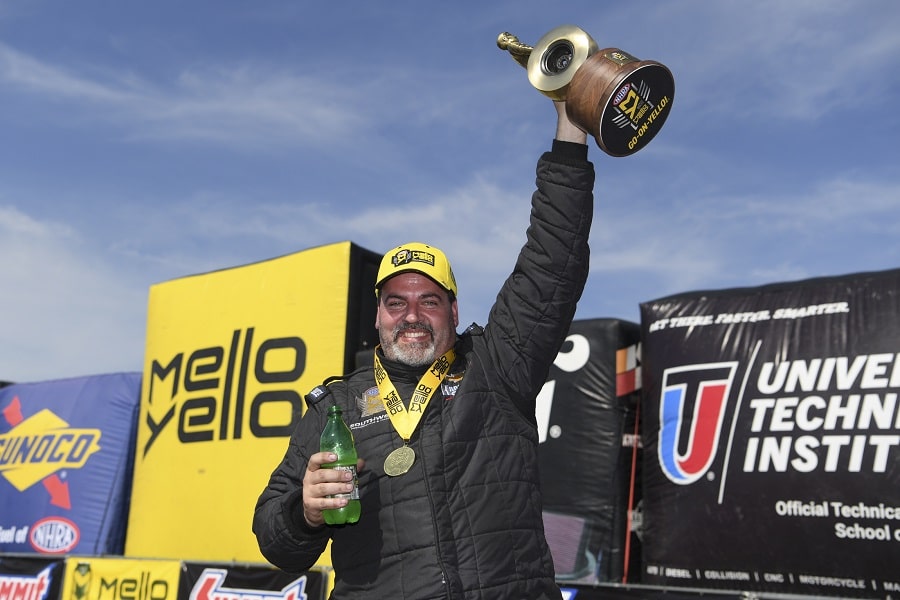 After a long hiatus, competitors in the Pro Stock Series were back it at the Summit Racing Equipment NHRA Nationals. The return of this series led to many explosive finishes and the overcoming of lots of hurdles to restart a new win streak for 7x NHRA National Champion Chris McGaha.

Despite two broken engines, one botched burnout and the added burden of acting as his own crew chief, McGaha was able to end a winless drought that extends back to last year’s New England Nationals in Epping. McGaha’s issues began during qualifying, where he damaged a pair of his 500-cid Pro Stock engines yet still managed to earn his best starting spot of the season with a 6.560 that was good for the No. 3 spot. McGaha parlayed his qualifying effort into a consistent effort in eliminations. Opening with a win over Wally Stroupe, McGaha cruised to a 6.604 in the quarterfinals after Greg Anderson shook the tires. McGaha’s biggest challenge came in the semifinals where he was paired with points leader Bo Butner. A tough task became even more difficult when McGaha botched the burnout procedure. He managed to coax a 6.610 out of the car to take out Butner, who slowed to a 6.650 after his KB-powered Camaro shook the tires.

All of this led to a final elimination round against Alex Laughlin. After driving and tuning his Harlow Sammons Camaro to a 6.620-second pass in this round led to win No. 8 for the driver who is only driving on a limited schedule this season.

“This win was strictly a blessing,” said McGaha. “This all started with a bad light in first round. I probably should have been trailered by Wally Stroupe in the first round because I was so late. In the second round I was a little better. I was still late, but I had no idea that Anderson shook the tires. We just dragged the same car up there round after round. It was much like a bracket car where we didn’t want to change a thing, and this led to this amazing win.”

Despite being unable to race to Sunday’s final round, Bo Butner leads the Pro Stock point standings going into the NHRA New England Nationals, at New England Dragway.

The Mello Yello Drag Racing Series continues at the NHRA New England Nationals (July 5-7) at New England Dragway, in Epping, N.H. Stay tuned to RacingJunk.com for all your NHRA coverage!