A thrilling weekend at this weekend’s Route 66 NHRA Nationals would give the current king of Top Fuel his fourth straight win of the season. While 2018 Top Fuel champion Steve Torrence can apparently find his way to the winner’s circle blindfolded this season, three other drivers earned their first victories of the season at Route 66 Raceway. Despite 2017 Funny Car world champion Robert Hight earning the No. 1 qualifying spot for this weekend’s race, Tommy Johnson Jr. won for the first time since 2017 when he and his Make-A-Wish Dodge drove past the former world champion in Sunday’s final round. Pro Stock driver Deric Kramer also ended a winless drought that extends back to last year’s Brainerd event when he wheeled his American Ethanol Camaro to a final round win against Erica Enders. Reigning and three-time NHRA Mello Yello Pro Stock Motorcycle champion Matt Smith earned his first win of the 2019 season after taking down Karen Stoffer in Sunday’s final round. 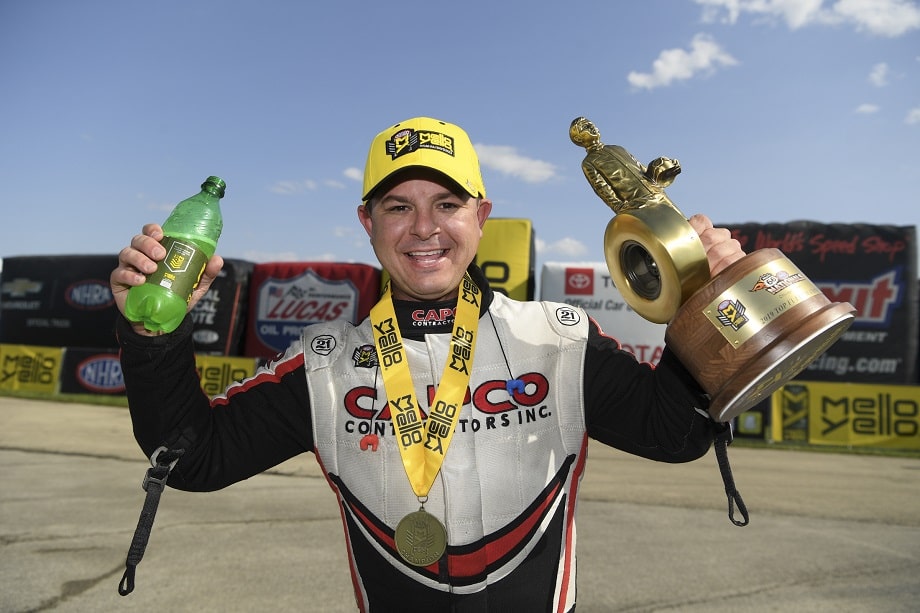 Although Mike Salinas would earn the No. 1 Top Fuel qualifying position this weekend, the recent winner at Charlotte, Atlanta, and Richmond would once again regain his momentum on Sunday after taking down Richie Crampton and former world champion Antron Brown, who drove through a fiery explosion in his Matco Tools Top Fuel Dragster in Sunday’s semifinal round, to battle Salinas in Sunday’s final round. After a 3.763-second pass, combined with a .040-second reaction time, Torrence earned his fourth follow-up win of the season.

“To be 22-4 in final rounds is a little surreal,” said Torrence. “If you had asked me seven or eight years ago that I would have 31 wins I would have say that you are full of crap, but I have a really good group of guys who have all made this possible and I can’t wait to see what else they can do this season.” 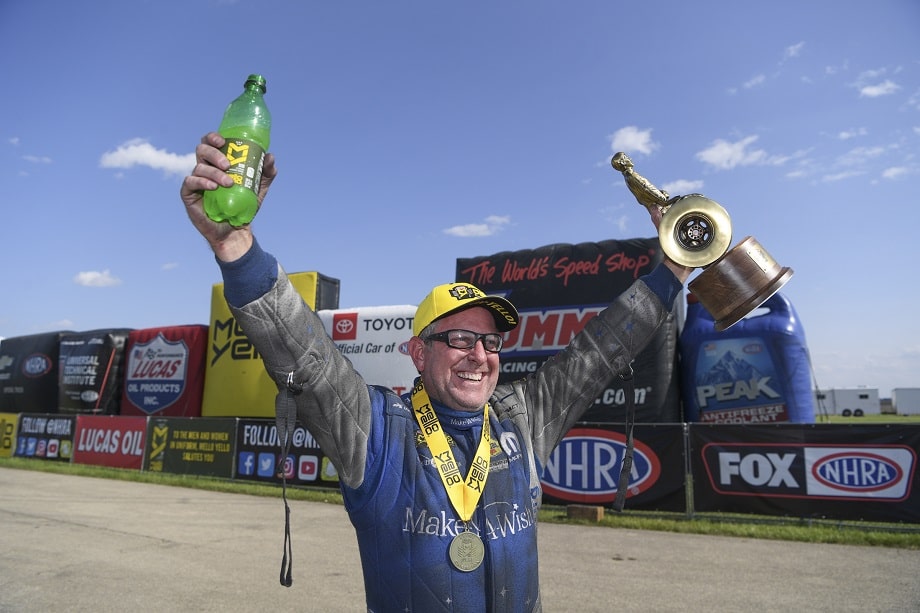 While his competition in the 2018 Route 66 NHRA Nationals would end in a fiery explosion, Tommy Johnson Jr. finally found his way to the top on Sunday. After taking down Matt Hagan and John Force in Sunday’s first two rounds, Johnson moved on to the final round against John Force teammate Robert Hight. After a quick take off it took more than four seconds for Johnson’s Make-A-Wish Dodge to get to the finish line, but he got there quicker than Hight, who smoked the tires just past halftrack, to earn his first victory since 2017.

“This is such a relief,” said Johnson. “When I beat Matt Hagan here, in 2015, he smoked the tires at the hit and when Robert did this yesterday it was such a load off. I can’t thank my team enough for making this all happen.” 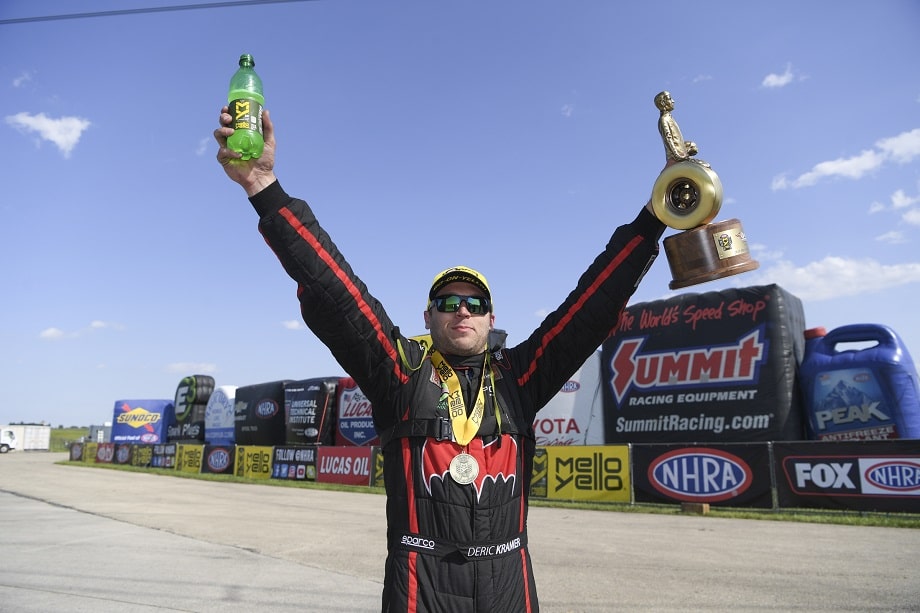 Johnson wasn’t the only driver to end a winless streak this weekend. Pro Stock Deric Kramer ended a winless streak that extends back to last year’s Brainerd event after taking down Matt Hartford and Alex Laughlin to take on Erica Enders in Sunday’s final round. Although Enders put up one heck of a fight all weekend, this driver’s final round would end in disappointment after fouling in the final round, which gave Kramer and his American Ethanol Camaro the win.

“This win is thanks to our not making any mistakes,” said Kramer. “This has been our biggest problem this year and this weekend’s perfect run proves that our team can still make things happen.” 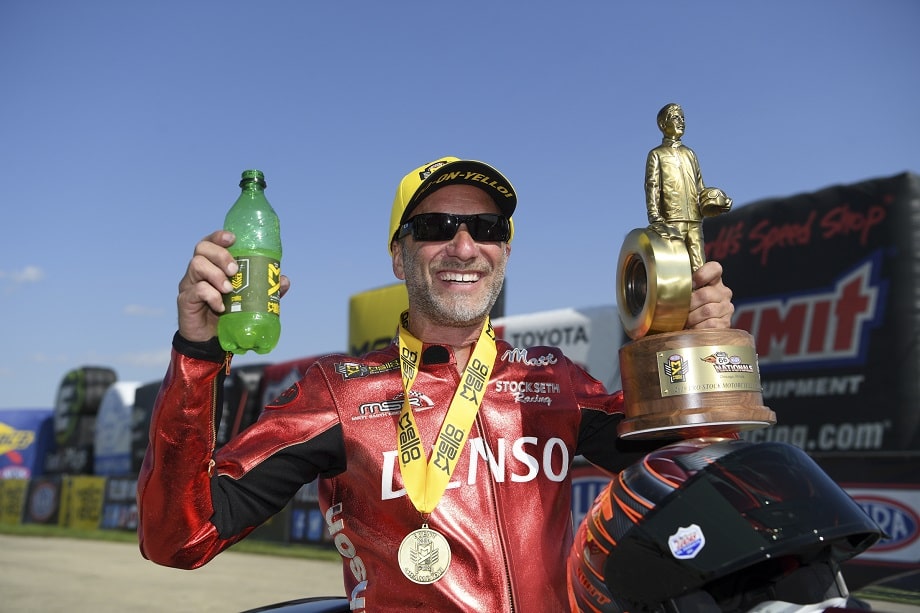 Pro Stock Motorcycle driver Matt Smith also broke a season winless streak after taking down Eddie Krawiec and wife Angie Smith to take on Karen Stoffer in Sunday’s final round. After giving a starting line advantage to Stoffer, Smith proved that not even a head start could stop him from repeating his 2006 victory over Stoffer in Englishtown thanks to his final round pass of 6.807-seconds.

“Our red rocket showed up this weekend,” said Smith. “We made a little blooper in the second round, but overall we had the quickest bike in every round. I just can’t say enough about my crew and my wife, Angie, and everyone who helps us. We needed to get a win, so we pulled out our championship engine that needs to be freshened after this race, and we will be ready to continue this success going forward.”

The Mello Yello Drag Racing Series continues at the Menards NHRA Heartland Nationals at Heartland Motorsports Park (June 7-9) in Topeka, KS. Stay tuned to RacingJunk.com for all your NHRA coverage!

About Ellen Richardson 421 Articles
Ellen Richardson is the author of Behind The Wheel for RacingJunk.com. This automotive sports junkie has a passion for telling an athlete's story while also covering various racing activities. Find out more about her at ellennrichardson.wordpress.com or follow Ellen on Twitter at @ellennrich or Instagram at elnrich33.