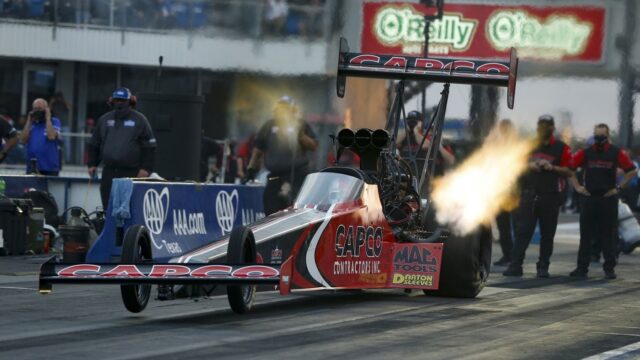 Despite cooler temperatures beginning to usher in a change of the seasons, things really heated up for three NHRA series regulars at this weekend’s AAA Texas NHRA FallNationals at Texas Motorplex. As he begins to prepare for the final two races in one of the shortest seasons of NHRA Camping World Drag Racing Series, Top Fuel Giant Steve Torrence expanded his points lead this weekend after once again taking down his father Billy Torrence in Sunday’s final round. Don Schumacher Racing driver Jack Beckman also closed the gap on his points-leading teammate by taking down Matt Hagan in Sunday’s final round. While Torrence and Beckman climbed the points ladder this weekend, Pro Stock driver Matt Hartford stopped points leader Erica Enders in the semifinals and defending event champ Greg Anderson in Sunday’s final round to take home his first Pro Stock Wally of the 2020 season. 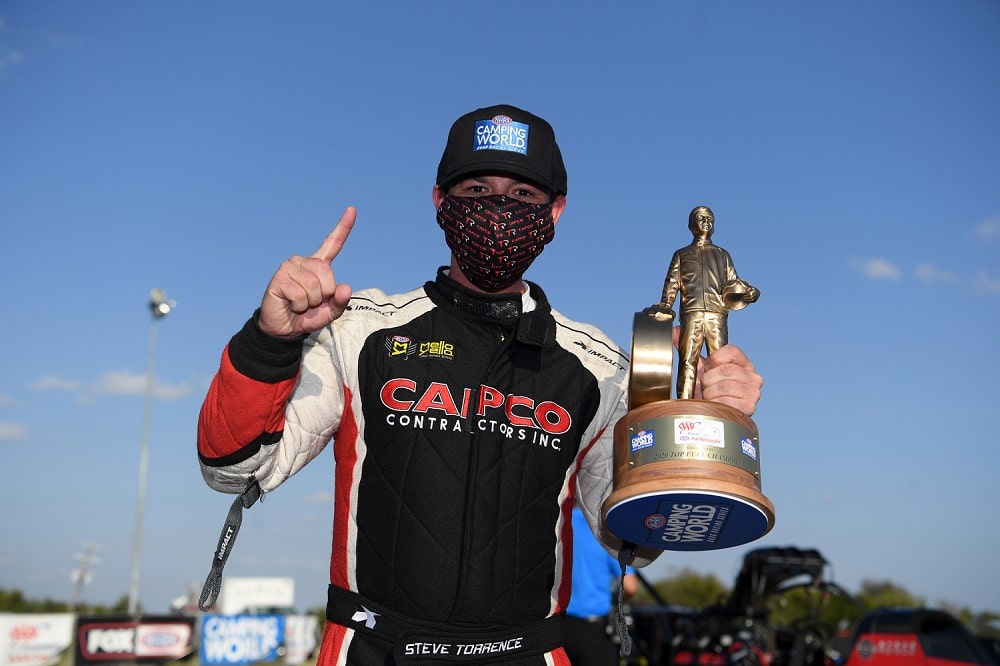 After sitting out the season opener in Pomona, Steve Torrence reached his fifth final in eight starts this season from the No. 1 qualifying spot, starting with a first-round conquest of Cameron Ferre, with whom Torrence famously became embroiled in a post-run dust-up after the first round of the 2019 Auto Club NHRA Finals. Making the decision to take a second-round bye, gave his Capco Racing team a chance to really fuel this champion’s fire as he moved onto the semifinals against Shawn Langdon where he took down his competitor’s DHL/Kalitta machine with a 3.72-second pass against Langdon’s 3.78-second attempt.
Following this impressive run, Torrence moved onto the final round against a familiar foe – his father Billy Torrence. Billy, the defending event champ, was appearing in his third final of the season, his most recent occurring two events ago in Gainesville, Fla., where he lost to his son. The same would hold true for the final round at the FallNationals at Texas Motorplex as the son would overcome the father with his final 3.7-second pass of the weekend.
“After lining up against my dad again, I really did not know what was going to happen,” said Torrence. “He has done a great job driving and I thought that he might just have a chance to take me down. While that didn’t happen, I am so glad to have an unbelievable weekend for the Capco team. To represent Capco, to represent Texas and put both cars in the final round, you just cannot ask for a better weekend than that.” 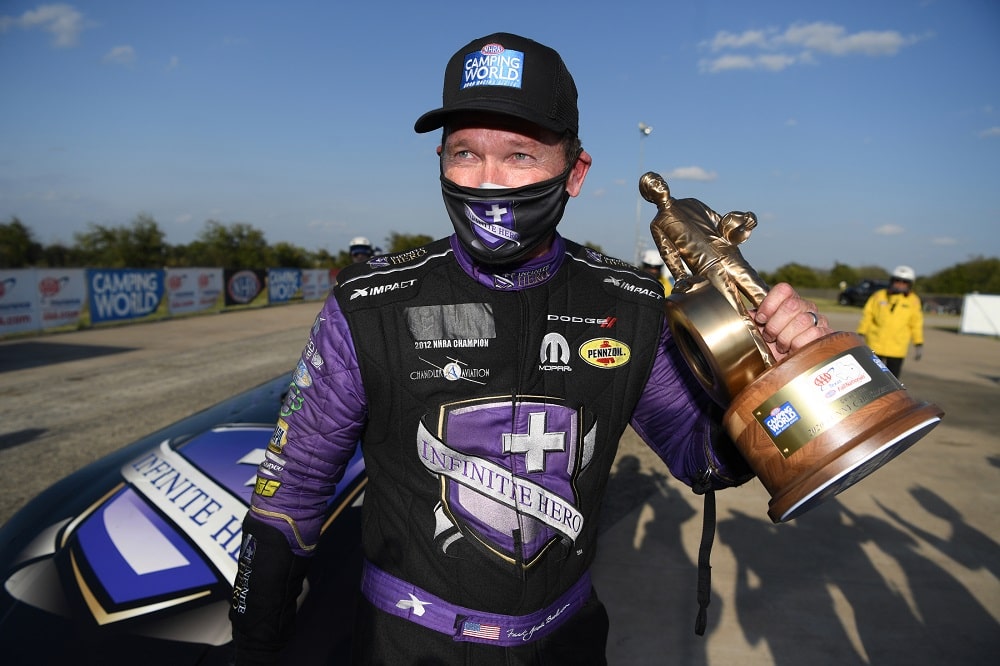 Steve Torrence was not the only driver to take down a familiar foe to up his points ante at this weekend’s AAA Texas NHRA FallNationals. Don Schumacher Racing’s own Jack Beckman continued to cling to Hagan’s points-leading coattails by reaching the final round for the fifth time this season after taking down Cruz Pedregon in round one with a 3.93-second pass and then pounding out a 3.90 in round two to stop Tim Wilkerson. Beckman then assured that Don Schumacher Racing would dominate the winner’s circle by stopping last year’s runner-up, Bob Tasca III, in the semifinals with another 3.90-second pass.

This victory would lead Beckman to a final round against his points-leading teammate Matt Hagan. Although Hagan put up one heck of a fight, Beckman would prove that Hagan will have to fight even harder to keep the points lead going into the final two races of the season after Beckman secured a win with his final 3.90-second pass of the weekend.

“We had a phenomenal car this weekend,” said Beckman. “I had a good feeling all weekend that we could pull off a win and to now have your name listed on one of the first Camping World Wally’s, that can never be taken away from you and that is just awesome.” 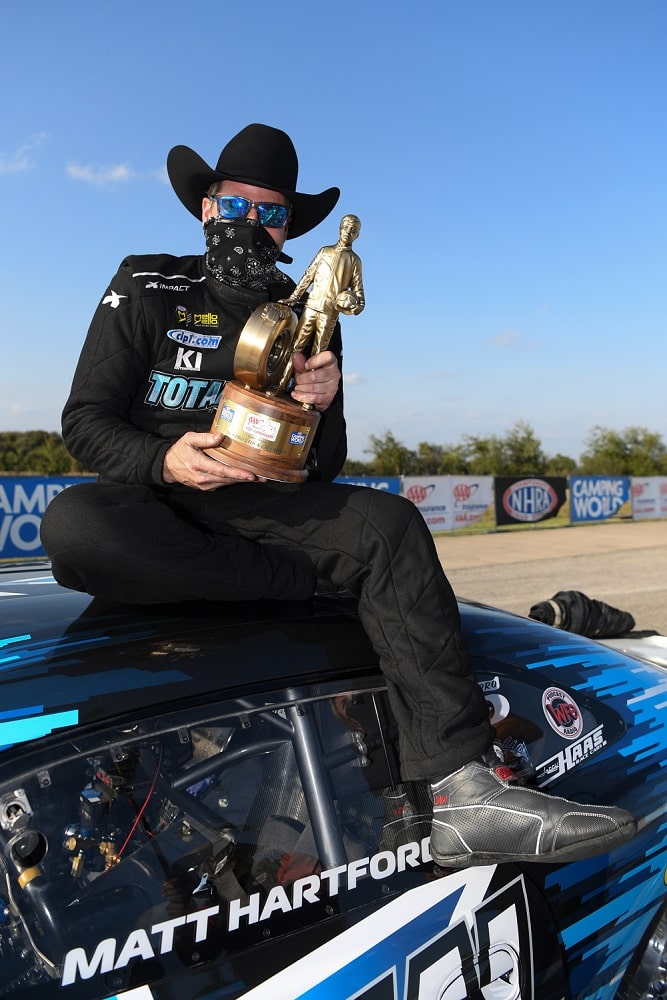 While Torrence and Beckman’s victories would give both driver’s a good shot at a somewhat points championship (can we really call it a points championship this season?), the newest Pro Stock victor might not have a chance at a points win but Matt Hartford still scored huge this weekend. After taking down in the Reher-Morrison-Shepherd tribute car in Sunday’s first elimination round, Matt Hartford moved onto former Pro Stock world champion Bo Butner in round two. After taking down Butner with a 6.629-second pass, Hartford moved on to Pro Stock points leader Erica Enders in Sunday’s semifinal round. The points leader was hot off of her win the previous evening in the rain-delayed Midwest Nationals final and was intent on doubling up in front of the partisan Texas crowd before Hartford took down the femme fatale with a hole shot victory by just .001-second to avenge his final-round loss to her at the U.S. Nationals.

Following this impressive win, Hartford was quick on the light again in the final round against Greg Anderson, reacting with a .018 light to Anderson’s .066 and pushed his Total Seal Camaro to a hole shot victory over the former world champ, 6.625-seconds to Anderson’s 6.588-second pass.

“While this win was huge, my victory in the semifinal round was what set this weekend apart for us,” said Hartford. “Erica is just so dominant on the tree and I just decided I was going to take my time, take a couple deep breaths and not be in a hurry. There was a lot on the line and to come back in the final round and win, it is incredible to have another Wally. To hold the first ever Camping World Wally in Pro Stock, that never gets forgotten.”

The return to the 2020 NHRA Camping World Drag Racing Series season continues at the Mopar Express Lane NHRA SpringNationals Presented by Pennzoil, in Baytown, TX on October 23-25, 2020. Stay tuned to RacingJunk.com for all of your NHRA racing coverage!