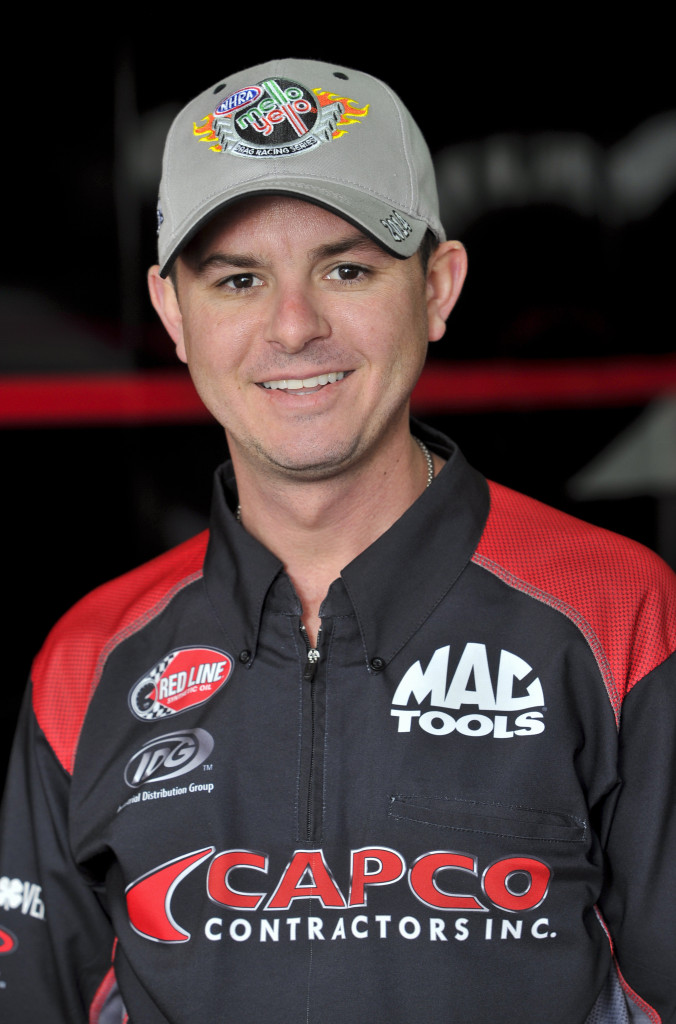 For Texan Steve Torrence, his 2014 NHRA Mello Yello season was literally a roller-coaster of performance and emotion. He came out the gate running strong in his Capco Contractors dragster, reaching the semi-finals in six of the first seven races along with a run in the fourth position in the points. Then the bottom fell out  during the summer schedule–five consecutive first round losses slipped his team into sixth place. The highlight of Torrence’s season was  his return to Indy for the U.S. Nationals with a runner up finish there. Five consecutive quarterfinal finishes and a sixth place in the Top Fuel Countdown wrapped up the season.

So this year, going into the 2015 series, what is Torrence, and his team, focusing on?

“We had really good race car and we stubbed our toe when we had those five first round losses,” said Torrence. “Looking back, that was a pretty devastating blow. Starting over with the Countdown, we started sixth where we could have at least started in second or third position which was worth 30 to 40 points. To have that in addition to what we did there at the end of the year those 40 points would have put us up a lot higher than sixth. We didn’t get the breaks that we needed. When we did have a really good car, things tended not to fall in our direction. We lost a lot of close races, but that’s just part of it. We were there, we were consistent and you have to catch those breaks to be able go your way sometimes and we didn’t do it. Quite a few times through the year I kind of dropped the ball for my team. We would get beat on a hole shot or something and that was a hard pill to swallow, too. We win as a team and race as a team. That was by far the best season and best race car I’ve ever had.”

The Richard Hogan-led crew has learned to avoid the simple mistakes, but drag racing has a way of humbling even the best of teams. Starting with his preseason testing at Palm Beach International Raceway in January, Torrence has begun building back his competitive confidence.
“I’m really looking forward going into this year,” said Torrence. “Continuity on the team is great and we could tell that at West Palm. We tested on Tuesday, Wednesday, and Thursday. Our team ran a 3.78 but we only made a couple of full pulls. We made a couple of real good half track passes. We’ve been working on some things that we’ve wanted to try but just haven’t been able to at the end of last year. It was probably the most successful test session we’ve ever had. We went down there with a plan to go through all the things we wanted to try. We learned what we needed to learn and I think we have a really good shot at going to Pomona. We’ve got our car where we want it to be right now. We have a pretty good handle on the things we tested.”
He quickly gives his crew chief, Richard Hogan and his Capco team all the credit. 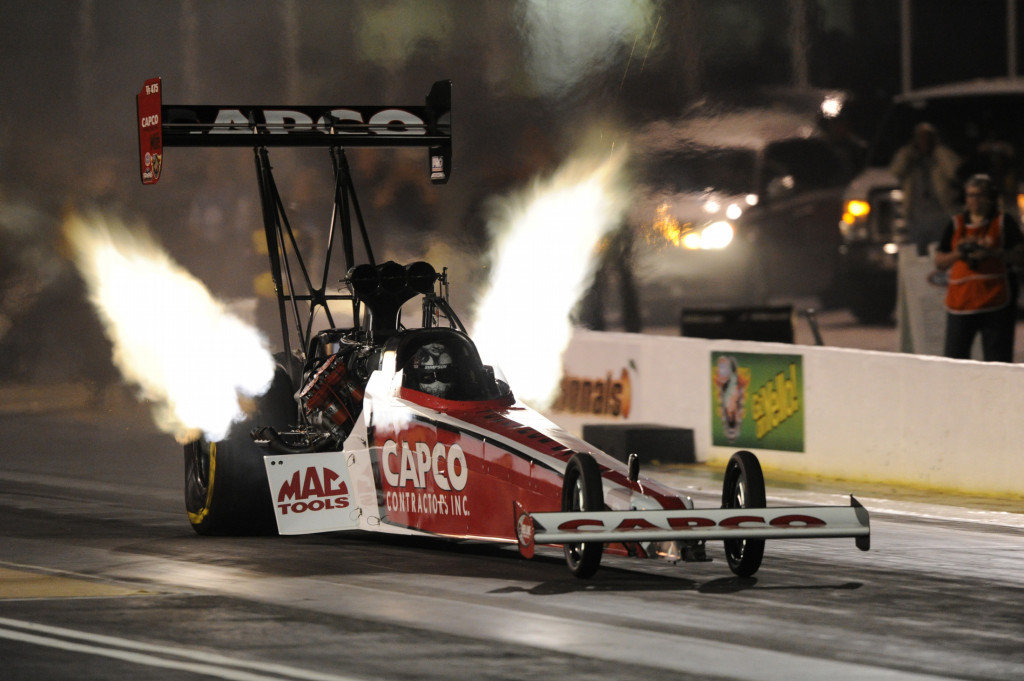 “With Richard, we have a rocket ship,” said a grinning Torrence. “The reason we didn’t go to more finals is we would go out there and smoke the tires in the semis. That was trying to be too aggressive and go for it. That’s just as hard to take. Richard and I get along great and we have a great working relationship while also being really close friends. When we’re at the racetrack and running the car, it’s all business. Going up there to run every time, it does add confidence knowing that he makes the right decision. He’s a pretty conservative guy. He doesn’t go up there and throw Hail Mary’s all the time. He races the track and the car beside me. That’s what it takes. It takes somebody that is not going to get up there to set Low ET every time, but somebody who is racing the lane we’re in and know what we can get away with. We think that’s the key for the major success we’ve had just doing what it takes to get by.

One of the biggest components to a successful season is the communication between crew chief and driver after a round run on race day. Its 70 minutes and it’s that last decision before leaving the pits that makes a team a champion.
“When we get back from a run, the first thing I do is go to the lounge and just look at the run itself, “said the four-time winner from Kilgore, Texas. “We’ll download everything to our computer and get it up on the screen. I can look at him and I’ll tell him what I felt. Sometimes you’re spot on and sometimes it’s like I’m not driving the same race car. I could tell him like ‘it felt like this thing was trying to shake’ a little bit at around 60 feet or further down the track. I could feel the engine starting to tug on the motor really hard and you can see those on the chart and sometimes you can’t. So you go into the car and make adjustments to the settings to make sure they are all lined up. You can make it more or less sensitive.

“It’s helped me as a driver to see what actually comes up on the RacePak data as opposed what I saw on the car. He and I will talk about the tune up for the next round a little bit. That way I have an idea of what we’re trying to do. It helps you drive the car when you have inside information of what we’re trying to do and what he’s trying to run. It helps you drive more efficiently when you know its set on kill trying to run a 3.74 or .75. You have to be on top of your game to keep it in the groove and drive it straight and make sure you click it off early when you’re running them that hard. They have a tendency of wanting blow up at the end. Or you can set it up softer and go right down through there and run a mid 3.80 and be easy to drive. That helps mentally prepare for the run.” 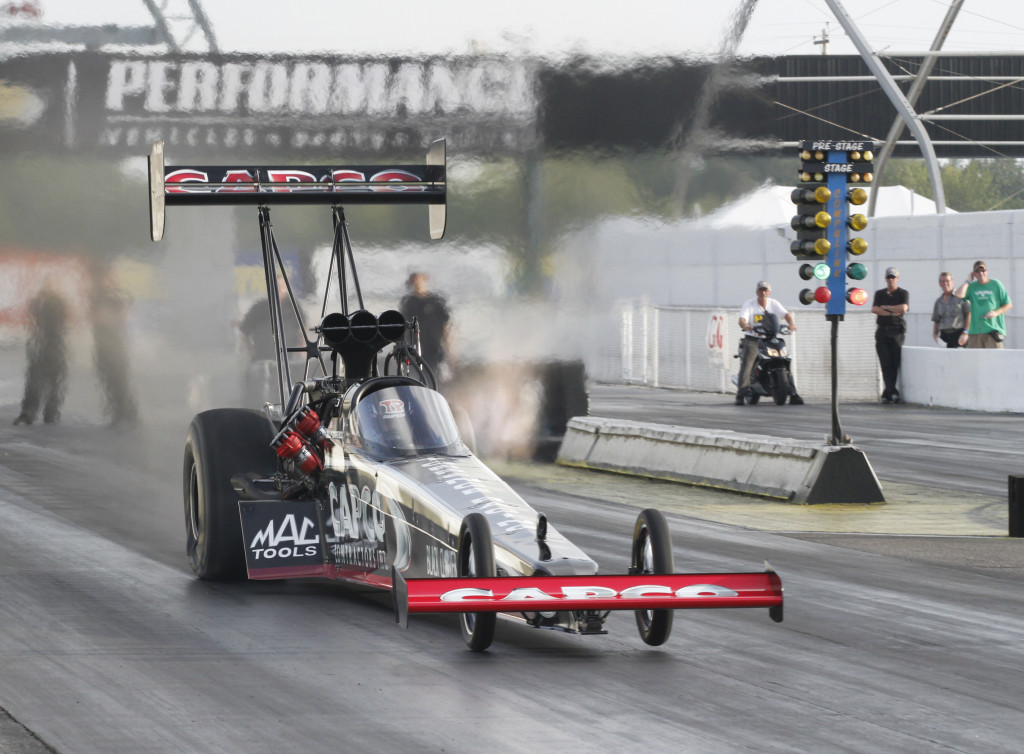 With good communication and a good eye, veteran tuner Hogan relies on what he sees as the car launches from the starting line.“Richard is not too critical of the driver. He’ll say ‘you did this, you weren’t in the groove’ or whatever and we’ll go back and look at the tape. It’s a pretty constructive conversation if something doesn’t go absolutely right. If it goes out there and blows it up, well, that’s a part of it. It’s hard to run a Fuel car, so I can’t complain if every now and then we kick the rods out of one of them when we’re trying to run a 3.72 ET.  That’s the way the sport is going. You run a 3.79 and you think, ‘damn, we’re off by five-hundredths’. It wasn’t that long ago you run anything in the 70s and you were leading the pack.”

Now for Torrence, it’s all about taking that first positive step forward and that starts this weekend at Pomona for the Circle K Winternationals, the kickoff of the NHRA season.“We have a good hot rod and I’m confident going into Pomona,” said a smiling Torrence. “Winning it would be unbelievable. That would set the pace for my team, my confidence, and morale. If we could go out there and do that, it would be best starting point you could imagine. I’m lucky I have such an awesome set of guys behind me and I’m just the poster guy for it. I get to stab the gas and get to drive it to the end. Those guys make it happen. The ego boost to our morale to be able to win Pomona and carry that into Phoenix would be huge. They’re hungry and so am I. It’s been too long without one of those gold men (13 Bristol) and that’s what we’re there for every race.

“Testing at West Palm was definitely a boost. I was down there nailing the tree and looking against other drivers, I felt I was on top of the list. It’ll be a different ball game when we start racing at it for real. I felt my driving was good considering I was out of the cockpit for two months. I have been working on my focus and concentration inside the car. “