After the U.S. Nationals, only 10 drivers/riders will be eligible for national championships in Top Fuel, Funny Car, Pro Stock and Pro Stock Motorcycle as they compete in the six-contest Countdown to the Championship, which commences at Reading two weeks after teams leave Lucas Oil Raceway outside Indianapolis. 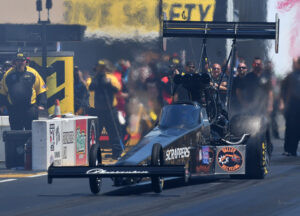 In Top Fuel, only one driver has qualified for the Countdown and that racer, of course, is reigning dragster champion Steve Torrence, the Texas Terror who has a yawing 621 points in hand over second place Antron Brown. That gap would have been greater had Torrence not been beaten in the final race of the Western Swing at Seattle by rookie Austin Prock. “Them Capco Boys” definitely have found the sweet spot for their car and driver, but after the U.S. Nationals, will they still have the upper hand?

Brown, a three-time Top Fuel titleholder, has struggled the past two seasons since one of his crew chiefs, Brian Corradi, returned to Funny Car competition with John Force Racing, first working with John Force’s daughter Courtney and now with the 16-time champion. That left Mark Oswald and Brad Mason in charge. It’s taken all of them a while to get settled but heading into this weekend, Brown is looking positive as he’s been to the Brainerd Top Fuel finals the past three years.

Piling up the points by going rounds is what works to get drivers into the Countdown and six-time IHRA champ Clay Millican sure knows how to do that. He, too, has been subject to a crew chief merry-go-round, with David Grubnic departing and Mike Kloeber returning to the sport after several years outside. We all know there’s no cure for racing and now Kloeber realizes that. It’s taken some time to gel but this team is formidable, in third place and standing just nine points behind Brown. 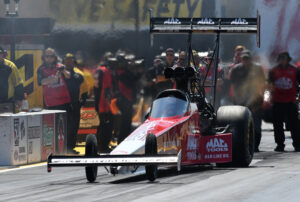 Fourth and fifth place racers, 2017 champion Brittany Force and Doug Kalitta have seen highs and lows throughout the first 16 racers but have managed to put up the numbers necessary to remain in the chase. The same could be said of the racers behind them, Mike Salinas and Leah Pritchett, who have both missed events in the run-up to the Countdown but have shown well when they’ve been at the starting line, with Salinas picking up his first two Wally winner’s trophies in the class this year.

Richie Campton of Kalitta Motorsports has a single victory – his second consecutive at the 50th annual Amalie Motor Oil Gatornationals this past March. Currently holding eighth place points, he’s numerically tied with Austin Prock, both of them 834 points behind Steve Torrence.Terry McMillen tenuously holds tenth-place points but has a few Top Fuel combatants who could shake up last year’s U.S. Nationals winner’s plans for the Countdown. 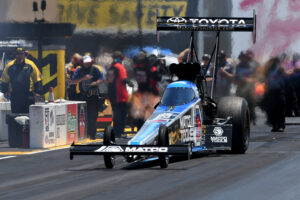 Scott Palmer is only nine points behind McMillen, part-timer (and two-time 2019 winner) Billy Torrence is 74 points back, while Camron Ferre and Jordan Vandegriff have slight chances of advancing if either one of them has break-out performances at these two contests.

It will be fascinating to watch how the nine other spots in the Top Fuel Countdown class shake out, where racers land in the final regular season contest and what kind of battles will be upcoming both at Brainerd and Indy. This weekend there are 18 dragster entries on the list, including all the drivers cited above, old-timers Chris Karamesines and Luigi Novelli, Kyle Wurtzel, Terry Totten, Lex Joon and Steve Chrisman.