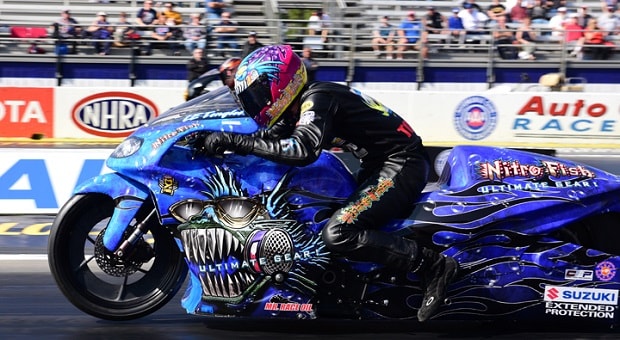 LE Tonglet, who won NHRA’s Pro Stock Motorcycle championship as a rookie in 2010 working with his father Gary, brother GT and a couple of weekend warriors, stepped out of his comfort zone last year to take on the second White Alligator Racing (WAR) Suzuki motorcycle in Mello Yello Drag Racing Series competition.

It worked out pretty well for the Louisiana native, whose father is close friends with and competed against WAR team owner (and 2016 PSM champion) Jerry Savoie. Theirs was an “arrive and ride” program, which allowed the Tonglet family to trust preparation and setups, for the most part, to Timothy Kulungian and the WAR crew. By the end of the 2017 season, one in which LE Tonglet won six of 16 races in PSM, it was evident this commingling of two Bayou teams was a winning one.

But. And there’s always a “but” somewhere, isn’t there? Tonglet was intending to return to WAR for the 2018 campaign, but his sponsor, NitroFish, hemmed, hawed and procrastinated. By the time NHRA’s Pro Stock Motorcycle class began its 2018 season in Gainesville, Fla., the money hadn’t landed and WAR needed to find a rider to campaign its second Suzuki bike.

Veteran Steve Johnson opted to take the bike, as Kulungian and Johnson have a longstanding relationship. After Gainesville, it was apparent this wasn’t going to work out as well as everyone had hoped. Johnson and the team weren’t getting on, starting with Bradenton testing where Johnson tried to get a handle on WAR’s very different Suzuki motorcycle. It wasn’t much like the one Steve had been riding all these years.

Now NitroFish and Tonglet are back with WAR, which should make every other racer in PSM nervous. This is a team that can take them all on – even the Vance & Hines Screamin’ Eagle Harley-Davidson team – and do so successfully. They announced the return on the Monday prior to this weekend’s NGK Spark Plugs NHRA Four-Wide Nationals at zMAX Dragway in Charlotte, North Carolina.

It’s an appropriate time for Tonglet to return to WAR. “I usually do pretty good at the four-wide event and last year was the first time we were able too win it, so I feel very confident that we’re going to go out there and win it again,” said Tonglet, who finished third behind the Harley-Davidson duo in season-long standings at the close of 2017 competition.

“I try not to think of it as any different than any other race. We just go out there and do the same thing at every track, and that’s win,” Tonglet continued. “Charlotte is one of those [tracks] where I did it, so we just want to try to go out there and repeat like we did last year.” Tonglet could use this pick-me-up after he qualified a lowly 15th at Gainesville and was eliminated in the first round by event winner Eddie Krawiec, the reigning titleholder.

“It’s a huge relief having Tim (Kulungian) as crew chief and Jerry as a teammate,” Tonglet continued. “We all push each other to be better riders. Tim sets up the bike and it’s always fast. We don’t have anything to worry about besides riding, and it’s going to be a lot of fun. My dad will be there, like last year, when he was lining me up, and [brother] GT will be coming to a lot of the races.”

There are 21 entries for this four-wide challenge at zMAX. Tonglet will have his hands full relearning the motorcycle and keeping his cool on the start line with three opponents. “The biggest thing is staying level-headed because on the starting line, it can get pretty hectic,” said the 16-time national race winner. “People can get confused very easily. We have to thank Scott Pollacheck last year for helping give us that win, because we threw the two Harley guys (Andrew Hines and Krawiec) off. You’ve just got to keep your head on straight.”