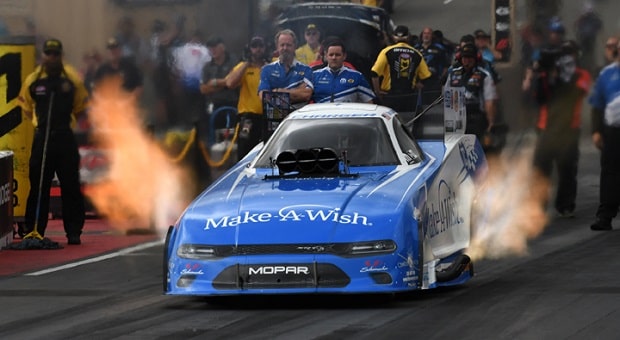 Emotions were Rocky Mountain high this past Sunday for Tommy Johnson Jr. at Bandimere Speedway. The Iowa-born racer, who got his racing start in the Denver area, has been trying for 35 years to bring home a Wally winner’s trophy at the track. Finally, in his fifth final round appearance and driving Terry and Doug Chandler’s Make-A-Wish Dodge Charger SRT Hellcat Funny Car for Don Schumacher Racing in the Dodge Mile-High NHRA Nationals presented by Pennzoil, Johnson converted.

He beat another very hot driver, Bob Tasca III, whose disappointment was palpable at top end after the pair’s very tight race in the afternoon’s 40th annual Dodge Mile-High Nationals final eliminations, where Johnson Jr. was first to the 1,000-foot stripe, running 4.102 seconds (308.50 mph) to Tasca’s 4.158/302.14 in his Ford Shelby Mustang. The Rhode Island driver easily beat Johnson off the line, with a .059 RT to the winner’s .092-sec. Tasca, like Johnson has two wins on the season; he’s reached the final round at three of the last four contests.

While Johnson’s first final round at this track came in 1984, his first professional final round took place in 1991, while he was racing Top Fuel. This weekend’s win marked his fifth final in four different categories at the track on the edge of the Rocky Mountains. In winning this race, Johnson earned the 19th Wally winner’s trophy of his career and propelled him to second in points, surpassing last year’s Denver winner, John Force, who’s still looking for his 150th NHRA Funny Car victory. 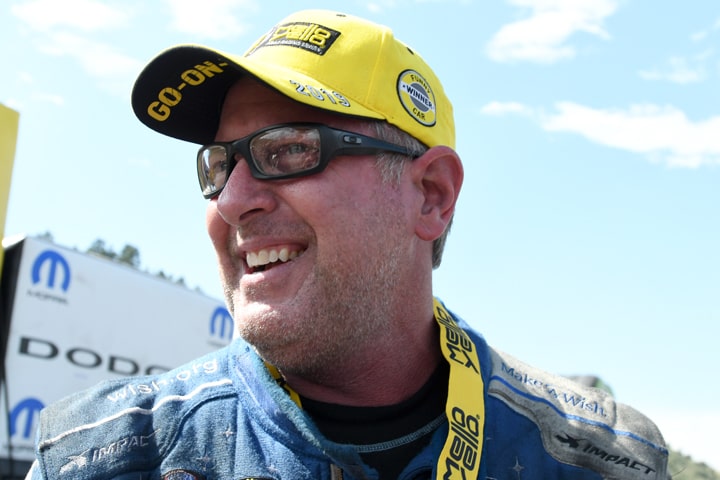 Tommy Johnson Jr’s love/hate relationship with Bandimere Speedway began in 1984 when he raced, at age 15, to the runner-up position in Super Gas. Three years later, at 18, he was in the Top Alcohol Funny Car finals – and lost. Johnson’s frustrated mounted after finishing second in Top Fuel at this track in 1991 and, again in Funny Car two years ago, where he was again a bridesmaid.

The Make-A-Wish Dodge Charger SRT Hellcat receives charitable visitors at most NHRA events and this was no different. Honorary Starter for this race was a Make-A-Wish designee, Porter Johnson (no relation), age 4, who cheered on the driver. Johnson got to the finals by beating Jeff Diehl, fellow DSR racer Jack Beckman and, finally, No. 1 qualifier Cruz Pedregon, all but Diehl (Toyota Camry) racing Dodge Charger Funny Cars.

Defeating Tasca for the eighth time Johnson said, “It wasn’t easy today; we had some close ones. We struggled on Friday like a lot of teams, and we felt pretty confident that Saturday would be okay. We had a nice get-down-the-track run on Q3, but [Saturday] night we made a great run (3.978/317.72), my quickest and fastest ever up on the mountain. That gave (crew chief) John (Collins), (assistant crew chief) Rp (Reynolds) and the guys a ton of confidence. I know, going into today we had a great race car and if we could control it on the track, with the sun being out, we’d be good. We’re a much better team than we have been in the past and we’ve really grown as a team.”

The victory allows Tommy Johnson Jr. and his team to think about “the sweep” of this Western Swing, which continues this coming weekend at Sonoma Raceway. The three NHRA races in three weeks is a true challenge, going from Denver to Sonoma to Seattle. The last driver to complete the sweep was Johnson’s teammate Antron Brown, who won all three contests in 2009. 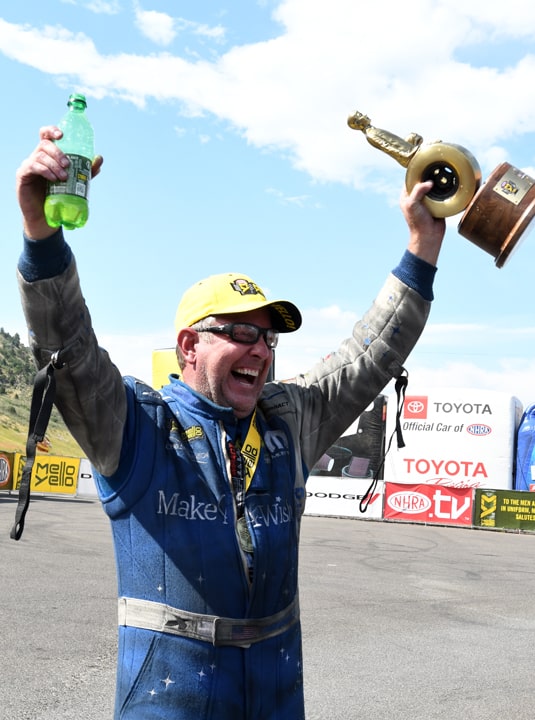