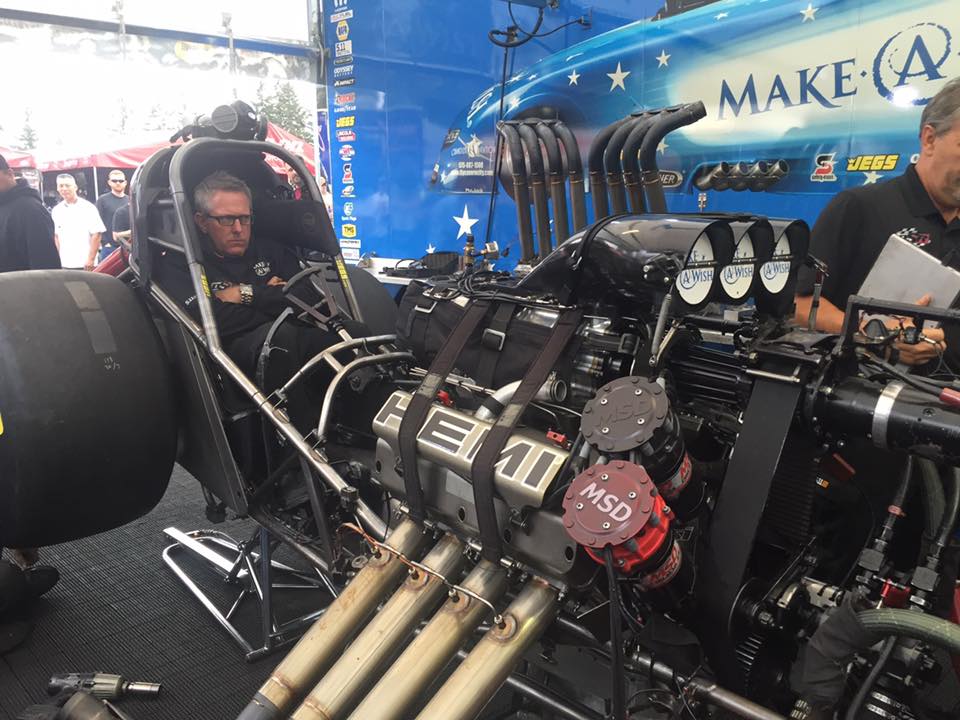 This is the final segment of RacingJunk.com following along with Tommy Johnson, Jr., driver of the Don Schumacher Racing Make-A-Wish Dodge Charger R/T Funny Car, as he went through the NHRA Western Swing.

The Protect the Harvest NHRA Northwest Nationals produced a first round win against long-time rival, John Force, thus ending his bid for his second Western Swing mini-championship.  His matchup with his DSR teammate Ron Capps in the quarterfinals proved although you have to run in the 3.80s nowadays, sometimes even that isn’t enough.  Johnson roared to a 3.899 second pass, but was bested by Capps with a 3.865-second elapsed time to win the round.

“Mark and I became very good friends from all the time I spent at the starting line when I did the track prep for DSR. He’s probably one of the most special guys I’ve been around.  When I got to Seattle, I went over to Mark’s house, had dinner with his wife and a few family friends on Wednesday and then on Thursday was able to take part of his memorial at the track.  Just by the outpouring from people showed the sign of what a great guy he was.  It was more people than they could fit into the venue than they had for it.  It’s just a tribute to the great guy he was.

It was a special moment and I’m glad I was a part of it.  It was a sad moment, too, but at the same time, it made you happy that you knew such a great guy.

In the race, my qualifying on Friday was impressive, but, yet, it wasn’t.  Right now Funny Car is probably the most competitive class out there.  To run a 3.90 in qualifying and to end up 10th — a year ago we would be jumping up and down.  Now, it’s like ‘huh’.  They told me on the radio on Q3 that I ran a 3.902 and I was disappointed to say, ‘that’s it’.  No one would be happy with that.

The conditions they way there were in Seattle and the track has really come around.  The improvements they’ve made over the years where it’s such a great facility now.  The surface is great.  The numbers were stellar like when Del Worsham reset the record at 3.83; that was unbelievable.  I’m a fan of the sport, I love the sport, and to see those numbers, I was having a ball watching that team and what was going on.  It was just unfortunate for us that we missed it by just a little bit.

What got us in this situation was we ran out of clutch discs after we won in Bristol.  We had to start over with a completely brand new batch of discs.  We’re still learning it.  We’re making progress and I was glad to see come Sunday that we were back in the 3.80s and get our car’s performance coming around.  We’re hoping for bigger and better numbers for ourselves.  With the Countdown coming on with six to go, that’s the time to compete.  We’re getting there.

It was kind of funny during eliminations the last two years; I knocked off Jack Beckman’s hopes of a sweep last year in Seattle beating him in the semi-finals.  This year we were up against John Force and won the first round.  To be able to knock him off preventing his sweep, breaking it up was just what we wanted.  It’s almost like we won the race.  At the same time, we know we didn’t.

It was going to be a really big run and we knew that going into Sunday.  Force has been on a roll, it was going to be a tough race, and the guys did a great job.  It wasn’t a win like last year, but we’re still pretty proud of that.  It just shows we’re a very competitive car.  Although we didn’t win the race, we’re still somebody to beat.

Last year, I think we peaked a little too soon and finished third in the championship and this year, it’s coming around.

At the same time, I felt a little disappointed that we came into the Western Swing fifth in points and came out eighth, only 71 behind Hagan now in fifth.  We’re right there.  One round here or there makes a big difference.

It all boils down to the last six races.  Yeah, I would like to be in the top five to start the Countdown, but if we’re not, it’s not that big of a deal.  We’ll reset the points at Charlotte and go from there.  I’m still comfortable where we are.

Now we’re going into Brainerd and it could mineshaft conditions, again.  We learned a lot last weekend.  The changes we had to make are starting to show some signs of getting a handle on them with our performance picking up.  After Bristol, we ran out of clutch discs and had to switch.  It’s taken this long for us to figure these out and the performance is coming around now.  Last year, we were runner-up in Brainerd against Robert Hight.  Our car shook in the finals.  It’s where we kind of peaked reaching three finals in a row for us.  This year, I think our momentum is starting to swing that way.  I’ve been in the finals up there a lot and I love going to Brainerd.  It’s one of my favorite tracks.  If the conditions play out with a winning hand, I just hope Brainerd wrote their record book in pencil cause if it’s in pen it’s going to have to be rewritten again.”