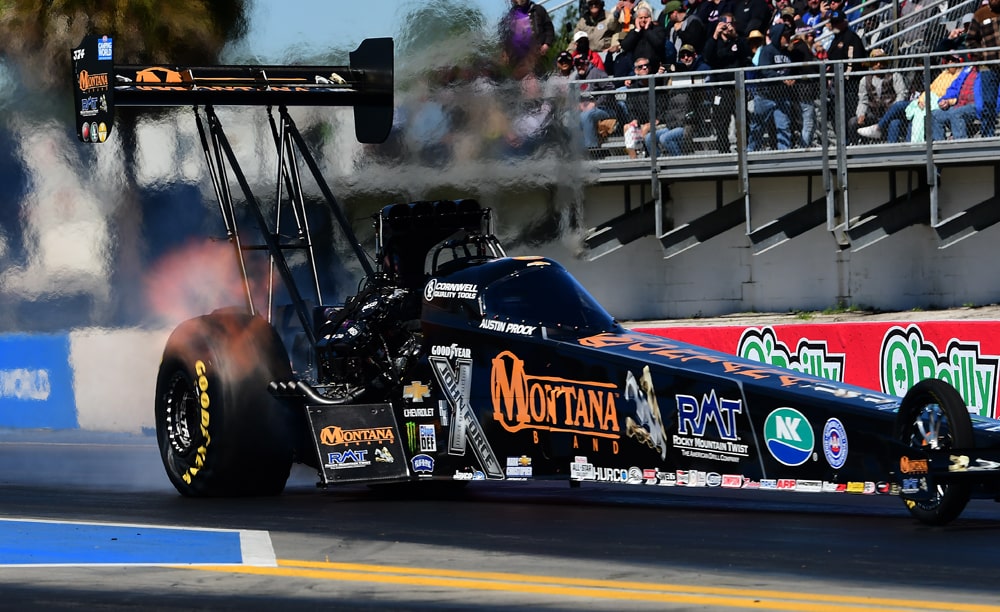 The NHRA U.S. Nationals, otherwise known as the ‘Big Go’ encompasses everything from sportsman racing to the the Top Fuel Harley competition and this year’s event is gonna be HUGE.

The action kicked off Wednesday, August 31, 2022,  for NHRA’s stalwart sportsman racers, who come from all over the North American continent to compete in the Big Go, the 68th Dodge Power Brokers NHRA U.S. Nationals. They’ll be joined on Friday by the Camping World Drag Racing Series professionals, along with Pro Mod, Factory Stock Showdown, Mountain Motor Pro Stock and Top Fuel Harley competitors. NHRA is saying there might be as many as 950 individual racing vehicles on the grounds of Lucas Oil Indianapolis Raceway Park (IRP).

With points-and-a-half on offer for the Camping World Drag Racing Series’ Top Fuel, Funny Car, Pro Stock and Pro Stock Motorcycle categories as they complete their final “regular season” races before entering the Countdown to the Championship playoffs, standings could easily change in Indy during this event. Nobody’s really safe in their standings, even those that have already qualified for the Countdown.

And with a variety of races within this race, including the Pep Boys Callout for Top Fuel and Funny Car and the 21st annual Dodge HEMI Challenge, cacklefests, together with a multitude of off-site celebrations of everything straight-line and fast, the weeklong tribute to drag racing will be as big as they come.

There are 25 racers on the Top Fuel entry list, including everyone in the Top 10 at the moment. Four drivers are set in the playoffs: leader Brittany Force, Mike Salinas (-94 points), Steve Torrence (-130) and Justin Ashley (-136). Behind that quartet lie some formidable competitors looking to find the right spot in the top 10: last year’s Gainesville victor Josh Hart, Shawn Langdon, Leah Pruett, Doug Kalitta, Antron Brown and Tony Schumacher.

The latter driver, who has eight championships and 86 national event victories was in eighth place at the completion of the last race in Brainerd, MN, was relieved of $10,000 on August 26th for “driving a vehicle that had two disabled safety systems.” Schumacher’s Maynard Family Racing team was docked a separate $10,000 for bypassing a performance restriction device; he also forfeited 50 championship points, which places him 553 points behind Force and only 14 points ahead of Clay Millican and Austin Prock, tied for 11th place.

In Funny Car, with 18 cars expected to be on the very crowded grounds, fully nine drivers have made the Countdown, leaving a single spot available to fill this weekend. At the moment, Tim Wilkerson-affiliated Chad Green holds the 10th spot, but Jim Campbell and Blake Alexander aren’t far behind him and, with points-and-a-half on offer, a lot could change. There are some solid entries looking to shake things up, including Paul Lee, Terry Haddock, John Smith, Dale Creasy Jr., Justin Schriefer and Bobby Bode III. 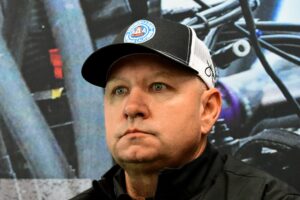 With the addition of Funny Car’s Pep Boys Callout, which wasn’t initially planned but had been added by the sponsor for this race – likely because Gainesville’s rain gave them the opportunity to sponsor both nitro categories – Funny Car could see some changes in the Top-10 before the four-day Camping World meeting is done. His six wins so far give Robert Hight and his John Force Racing Chevrolet Camaro SS a 250-point lead over fellow three-time champ Matt Hagan’s Tony Stewart Racing Dodge Charger SRT Hellcat, with reigning titleholder and two-time 2022 race winner Ron Capps in third, driving the new-for 2022 Toyota GR Supra and lagging Hight by 306 points.

Bob Tasca III has his Ford Mustang program coming to fruition at just the right time, surging toward the top of the heap as he attempts to add to his 12 Funny Car wins and better his third-place result in last year’s standings. His two recent victories at Sonoma and Brainerd give the Rhode Island native momentum to erase some of his 368-point lag to Hight. In fifth place is the true Flopper GOAT, 16-time champ John Force and his Chevy Camaro SS, just ten points behind Tasca, while J.R. Todd, the 2018 Funny Car champ is sixth, a full 622 behind Hight in his Kalitta Motorsports Toyota GR Supra. Alexis DeJoria and her GR Supra are taking part in the Pep Boys Callout; she’s 636 behind Hight, while Cruz Pedregon, in his Dodge Charger SRT Hellcat is 659 back. Tim Wilkerson holds ninth place in his Ford Mustang, followed by technical partner Green.

Pro Stock seems to go in cycles, with one team prevalent for a while, then another. In this era, the battle is fought primarily between KB Racing, whose Greg Anderson won his fifth class title in 2021 – and who is seeking his 100th class win this weekend, as he has throughout the 2022 campaign. Anderson secured his 99th Wally trophy at last year’s season finale. This year the top echelon belongs to Elite Motorsports and teammates Erica Enders and Aaron Stanfield. Enders has six wins thus far in the season – of Elite’s 10 victories in 12 contests – and is the defending winner of this race. She’s looking for a third straight and fourth overall U.S. Nationals victory this weekend.

Enders has a 126-point lead on Stanfield, while KB Racing’s Kyle Koretsky is a gaping 358 points behind. Anderson lags by 375, while Elite’s most recent double winner, Troy Coughlin Jr. – who’s earned his first two Pro Stock victories in the last two events the class has run – is in fifth place, 460 points behind his teammate. Last year’s Rookie of the Year Dallas Glenn from KB Racing is in sixth place, 488 points in arrears, followed by Mason McGaha, Camrie Caruso, Matt Hartford and Bo Butner, all of them driving Chevrolet Camaro race cars. Only Enders through Anderson are qualified for the playoffs, leaving six spots up for grabs.

And that’s where it gets really interesting. While Elite’s Bo Butner is in tenth place, he’s only five points ahead of Fernando Cuadra Jr.’s Mustang, with Deric Kramer’s Camaro in 12th only 25 points behind the 2017 Pro Stock champ. Cristian Cuadra (Mustang) is also having a good year and has a 61-point deficit to Butner. There are 18 cars on the premises for this race with such stalwart competitors as Chris McGaha, Larry Morgan, Alan Prusiensky and his Dodge Dart, Kenny Delco and Fernando Cuadra with his Mustang. This should be a very, very exciting class to watch over five qualifying sessions and Monday’s eliminations. 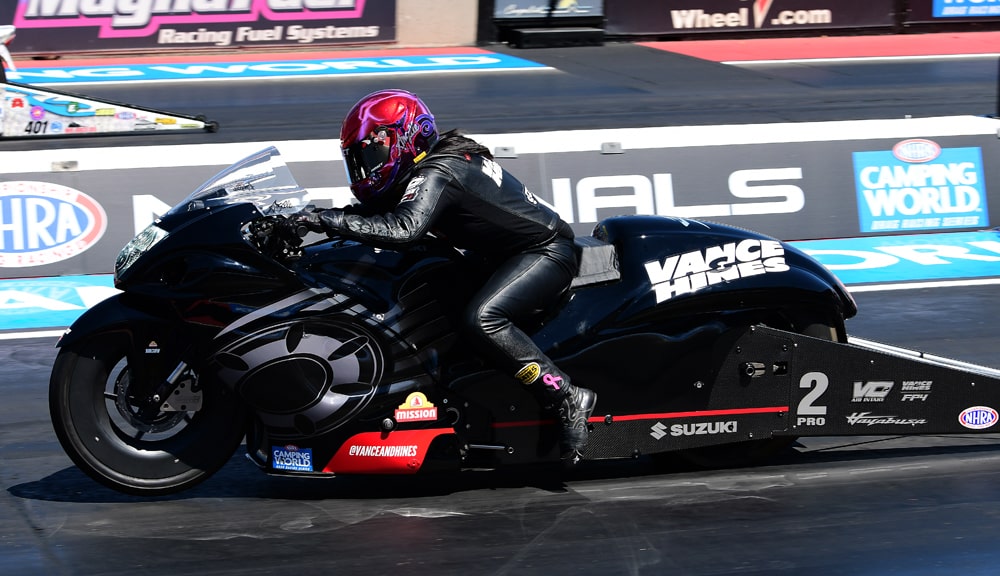 Like Pro Stock, the two-wheel set goes in cycles as well, with one team having a hot hand and everyone else scratching their heads. Over the past few years it’s been Matt Smith Racing, which took over the top spot after Vance & Hines’ relationship with Harley-Davidson ran its course. Matt Smith is the reigning titleholder in Pro Stock Motorcycle after capturing his fifth championship last year in Pomona. Smith has gone back and forth between the Buell that’s gotten him all those titles and a new Suzuki program he and wife Angie Smith are running with Scrappers for Jianna Evaristo and Jimmy Underdahl. This week he’s on the Suzuki.

There are eight spots already taken in the Countdown and pretty evenly split between Buell and Suzuki riders. As NHRA constantly adds and subtracts weight for both brands, so, too, have the standings changed. After not having a single win to his name for the time he’s ridden with Reed Motorsports, suddenly Joey Gladstone finds himself atop the heap, due to double victories in the last two races and stoutly consistent runs the balance of the season. Gladstone has been on the cusp for quite a while; now he and his Suzuki Hayabusa lead three-time Pro Stock Motorcycle champ Angelle Sampey’s Vance & Hines Suzuki by 64 points. Her teammate Eddie Krawiec is third (-96), while longtime Suzuki stalwart Steve Johnson is fourth, 103 points behind Gladstone. Matt and Angie Smith (she’s riding a Buell), along with Jerry Savoie and Karen Stoffer’s Suzuki’s are set in the playoff field.

Behind this grouping of eight, Marc Ingwersen’s and Ryan Oehler’s Buell motorcycles make up the balance of the top 10. Oehler, who’s been battling inconsistency is under attack from Underdahl, who is a scant seven points behind the one-race winner. With 22 motorcycles on the grounds at IRP, something has to give. Expect to see lots of changes in the top 10 standings by the time Monday’s dust clears. Those attempting to make the field this weekend include Suzuki riders Jianna Evaristo and Chris Bostick, Wesley Wells, Michael Phillips Jr. (who’s been Gladstone’s “good luck charm” the past few races) and Kelly Clontz. Buell riders are Chip Ellis, Hector Arana and Hector Arana Jr. and Scotty Pollacheck. Ron Tornow has his Victory bike on-site and no affiliation has been given for either Malcolm Phillips Jr. or Gaige Herrera.

Points-and-a-half, five qualifying sessions, possible weather issues and the general stress of racing the biggest event on the NHRA calendar will all come into play this week once the Camping World Drag Racing Series begins its activities late Friday afternoon. FS1, FS2 and FOX will carry the festivities, and nitro team owner Tony Stewart will join Brian Lohnes and Tony Pedregon in the booth for final eliminations on Monday. That show will be seen 2-5PM ET on FOX.

About Anne Proffit 989 Articles
Anne Proffit traces her love of racing - in particular drag racing - to her childhood days in Philadelphia, where Atco Dragway, Englishtown and Maple Grove Raceway were destinations just made for her. As a diversion, she was the first editor of IMSA’s Arrow newsletter, and now writes about and photographs sports cars, Indy cars, Formula 1, MotoGP, NASCAR, Formula Drift, Red Bull Global Rallycross - in addition to her first love of NHRA drag racing. A specialty is a particular admiration for the people that build and tune drag racing engines.