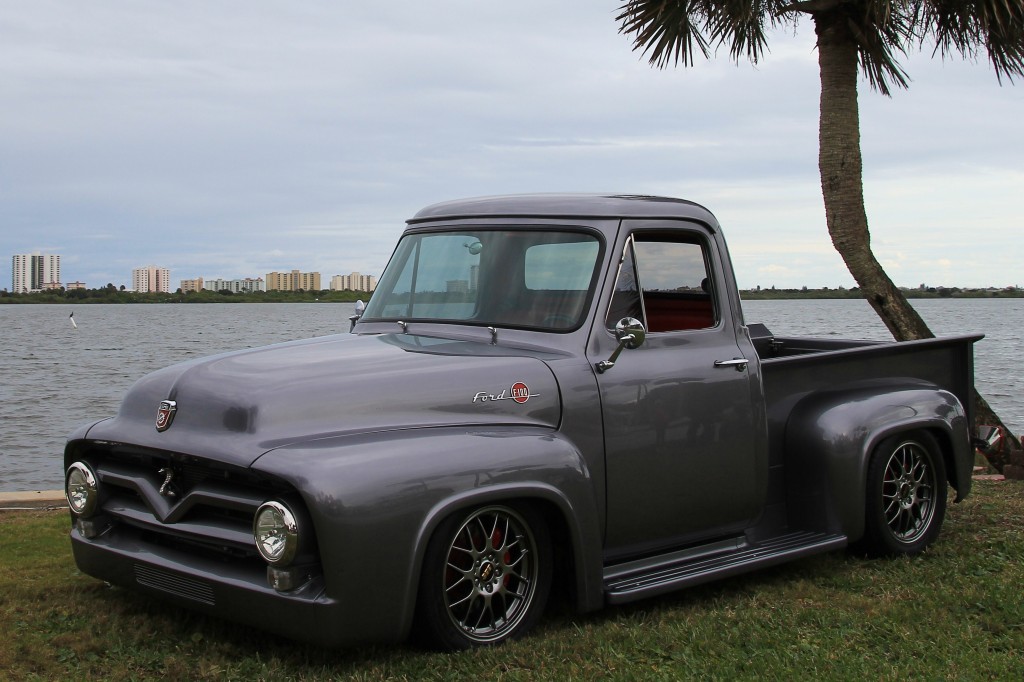 Henry Ford built his first truck in 1900, a vehicle which evolved into the F-100 in 1953. While the F-100 was originally equipped with an in-line six or a flathead, Henry Ford could never have imagined the power plant that would drive this 1955 pick-up, owned by John Maffucci of Port Orange, Fla.

John first discovered the truck resting in an old chicken coupe in Clemont, Georgia. Looking over the rusting ride, visions of its future danced in his head. Would it be a shop truck, a rat rod, both? But as his vision cleared, the image of the truck’s fate morphed into the record-setting, all-purpose vehicle that we see today. John has a long history with racing and race vehicles, including a turn driving the Camel Light cars back in the 80s. He previously owned a 2003 Mustang Cobra that he set a Production Supercharged record at Bonneville (203.231mph), all while having driven that car all the way from Georgia and back again! He also owns RPM Ranch in Dawsonville, Georgia, a company that helps connect people with the Mustang of their dreams.  John’s a man who knows speed, and knows Fords, and suddenly, he had a project in front of him screaming out for a combination of that knowledge. But he needed a little inspiration.

He got it directly from the Ford Motor Company, who contacted him expressing an interest in the project truck based on John’s involvement with them in the Salt Flats record Speed attempt.  Knowing John’s reputation, Ford wanted to see his inspiration play out at its SEMA Booth exhibit, with a 2003 powertrain from a record setting Mustang at his disposal. Rising to the challenge, John and his team quickly set about transforming the old F-100 into a show-winning, record-holding vehicle.

Heidts Mustang II front suspension with dropped 2 inch spindles, BBS RGR one-piece forged aluminum wheels (18×8’s all the way) and BF Goodrich Comp TA’s (P235/50ZR18’s –front and P245/55ZR18’s rear) help it roll, while the 13 inch Cobra Spec binders in front and SVT Cobra rear 11.6” discs help it stop! The stock independent rear is fitted with 4:10 gears and traction locks.  Spent gasses are handled by the Bassani headers and Borla 2.5” mufflers exiting in the custom rolled rear pan. It keeps its cool too, inside and out, with an AutoRads Customer aluminum radiator as well as vintage A/C. The front and rear pans are about the only body modifications made to this all-steel truck. The custom front pan hides the intercooler, while at the rear, the license plate hides a class III Hitch for those occasional shop/parts runs.

Randy Powell of Powell’s Auto Body in Dahlonega, GA used Dennis Carpenter reproduction sheet metal in getting the body ready for the Ford ’06 Tungsten Gray paint.  Graeme “Rabbit” Bartils of North Georgia Fabrications in Dahlonega boxed the frame and made many of the modifications to get it all to fit. Tim’s Upholstery in Gainesville, GA added the interior which was fashioned from an idea he had looking at the front seat of a Bentley. The Porsche “Lipstick Red” leather  upholstery was fashioned from one piece so that there would be no seams and used on the overhead custom panel as well as the doors. The Lexan Bed Floor cover shows off all the underpinnings garnered from the 2003 Mustang Cobra.

Powered by the Ford Modular overhead cam V-8 (Mod Motor-510 rwhp) and a Tremec T-56 6-speed, the truck ran at an official 133 mph at Maxton to take the AA/Modified Pickup East Coast Timing Association land speed record in 2006. The next year, the truck went even faster: 144.2 mph in the Maxton Monster Mile.  Other awards followed including People’s Choice, Editor’s Choice, Best Interior, a Fun Ford Weekend Best of Class and a Top 15 Win at the ’06 F100 Nationals. Some kind of parts hauler you have there, John. Thanks for sharing it all with us. Henry Ford would be proud!

About Gary Rosier 78 Articles
Gary Rosier took up photography 4 years ago in his retirement, but has discovered a passion for covering automotive and aeromotive events, particularly around Daytona Beach, FL. You can also find him on Facebook and his own site http://www.carsplaneslandscapes.com.