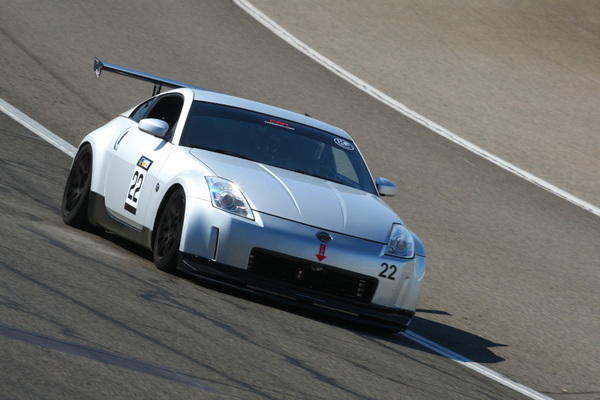 So, how did I end up in a dedicated track car in a three-car-wide drag race on the front straight of California’s Auto Club Speedway? My life with “Vivid” (my 2006 Nissan 350Z) began at Costa Mesa Nissan where I picked her up in the Fall of 2006. She instantly got her mods and became my daily driven show car. Sure, we dabbled in a few autocross and track days in the beginning, but it was nothing serious.  Just a little light flirting with speed.

Fast forward to 2013. Newly single and with newfound financial freedom, I was restless and needed a distraction. Vivid was the solution.  It was finally time to transform her into a full-time track car, to go from flirting to a full on affair. I started with a more aggressive stance thanks to Eibach Sportline springs and Koni yellow shocks, with a new voice to match.  Crawford high flow cats were modified to be test pipes which amplify that HKS exhaust note.  Since I live in Las Vegas, with its desert climate, I splurged on a Koyo race series radiator to keep Vivid’s temperature gauge down.  She also received some new aerodynamics with a new front lip, and some increased safety with a new welded in 4-point roll bar. I even splurged on some Toyo R888’s to make sure she had good grip on our most recent outings to Southern California’s Chuckwalla Raceway and the world famous Laguna Seca corkscrew. 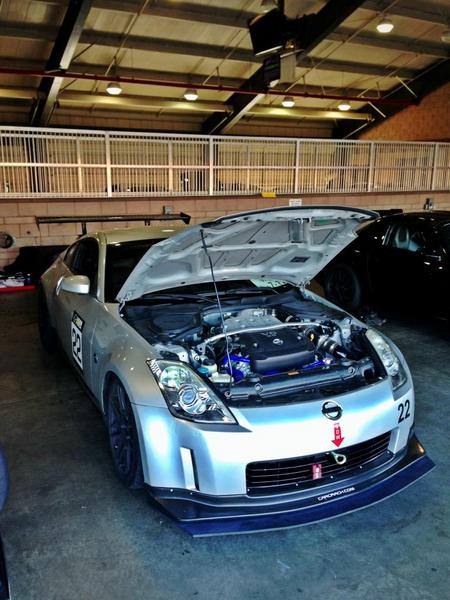 But once the trip to beautiful Monterey was complete, it was time to prepare for the next track event, which was going to be the high speed “roval” of Auto Club Speedway in Fontana, California. With the help of my friends, I developed a game plan and started to get to work. Aerodynamics was priority number one, and for added rear downforce I looked to Aeromotions and their fantastic static wing. To complement the rear downforce, we developed a custom one-off plywood front splitter to add a bit more aero to the front.

To add more traction I acquired a new set of track rims, Forgestar F14s, which were wider than my previous track set, but this time were wrapped in Hankook RS3’s, which are great, but R888’s are yet again in my car’s future. Going fast requires stopping fast, so we installed new rotors and Carbotech xp12 track pads. A Motul fluid brake bleed assisted in making the brake pedal both stiff and effective. Lastly, to achieve proper alignment, Eladio at H1 Performance installed  SPC adjustable arms for the front and back.

With those modifications complete, the car was ready. (Since I would be going over 130 MPH into turn 1, believe me, I made sure the car was prepared ).  After a quick exterior detail, I packed up my helmet and track supplies and began my drive to Southern California. After a necessary stop at Chick-fil-A, I parked the car at Hermosa Beach and enjoyed the view. Although a great low stance is perfect for the track, it is a total liability for every single parking lot entrance in Southern California which seem to have a steep ramp of a driveway everywhere I go. I always wonder how anyone can drive a lowered car down there; I know I left a couple of scrapes on the roads… sorry about that.

Sunday morning finally came, and off to the track we went. Our group caravanned from Hermosa Beach, and with a Nissan GTR Black Edition, a beastly wide-body Mitsubishi Evolution 8, and a modified Honda S2000, we were definitely bringing the race to Fontana. After checking in, we found our garage spaces and began unloading and making final adjustments to the cars. The anticipation was tangible; I couldn’t wait to get the car on the track and go fast. 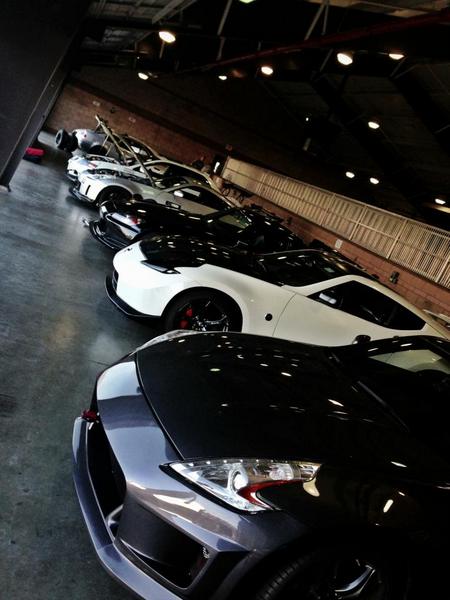 Finally, the announcement came over the speakers that our group session was about to begin. I filled the tank halfway with a nice blend of 100 octane race gas and brought her to the starting grid. The track opened up and off we went! For the first three laps, everything was going great. The new aero kept the Z planted, and my confidence was building. But then lap four happened. Coming into the embanked oval at turn 1 carrying 130 MPH, the front splitter came loose and shot air and pressure straight up through the engine bay and into the underside of my hood.

Luckily, the hood latch held shut, but when your hood starts to slam itself against its latch in an effort to open while you’re turning the car at 125mph, let’s just say that the pucker factor was at an all-time high! I quickly ditched the car into the infield grass and brought it to a stop in front of the turn 2 race steward, who was already prepared to black flag me. After an embarrassing drive through the dirt back to the pit garage, my friend and I started the process of removing the front splitter and checking for any damage. Seeing no damage and with the splitter taken off, I checked the tire pressures and got my helmet on just in time for our second session. Admittedly I was rather timid with my first couple of passes, but once I got back into the groove, my confidence returned. It was a great day on the track; the temperature was fair, and the sun was blocked by some clouds.

Lunch break gave our group a chance to grab a quick bite and walk around to check out the car show and autocross in the parking lot. Session 3 came around, and since some drivers had already left for the day, another friend from Vegas in a 350Z joined our run group. After playing some lead follow laps, we came upon the “roval’s” front straight and had a bit of a drag race. Our two-wide drag race soon became a three-wide run into turn 1 as another silver Z, this one a 370Z, joined us. Unfortunately the track photographer didn’t capture this all-silver Z, three-wide run into turn 1, but a friend with an iPhone did get it on video, thank god. 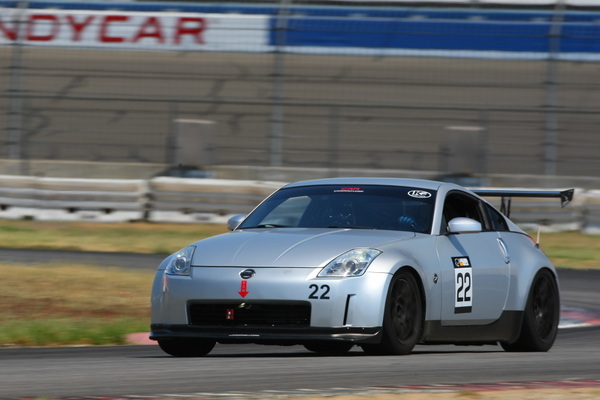 Lap times continued to improve, but I still wasn’t satisfied, so I elected to go back out for the fourth session. I finally broke into the 7s and ended up with a fast time of 2:07.6 for the day. Although my goal was to be within 2:05, that goal will have to be achieved another day.

As our group drove back, we texted back and forth lap times and results, mixed in with some smack talk. It was truly a great day. As I parked Vivid in the garage, I immediately went to the whiteboard to list out “to do’s” for the next track day at Spring Mountain Motorsports Ranch on October 5th. I don’t know at this time what additional mods I may add, given the date is approaching quickly, but the car and I will surely be out there having a good time going fast. Stay tuned.