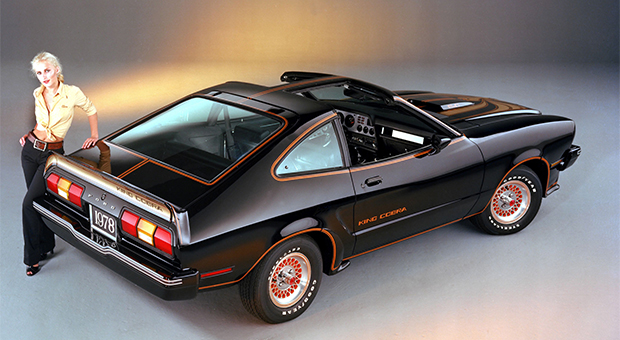 The Ford Mustang has been around for five decades now. The original pony car sometimes gets knocked for being too precious, too much an iconic convertible, but Ford Racing wants to remind you that this car was, and still is, bad ass. Part of that campaign is re-introducing the King Cobra for 2015, based on the original package built specifically for speed and agility, designed for drag and street racing.

The first King Cobra was introduced in 1963 for the Cooper Monaco sports racing cars, designed by Carroll Shelby and John Cooper, and became one of the most sought after automobiles ever built and raced by Shelby.

Ford brought the name out again in 1970 for NASCAR prototype stock cars, based on the Ford Torino, but the Torino never raced. However, the most popular and well-known package was one that would equip the 1978 Mustang II.  A four speed manual transmission, and a 302 V8 with a Variable Venturi Carburetor (for CA buyers) plus the shrieking cobra on the hood and other striping graced about 5000 Mustang IIs, which would do a ¼ mile in less than 17 seconds, and went 0-60 in 11.2 seconds. Not the fastest beast out there, but it certainly had style.

Sure, the King Cobra owes more to the Pinto than to its namesake, coming out as a product of Ford’s push for the sub-compact market rather than the performance industry, but it’s still a rockstar for track junkies and street rodders due to it’s adaptability, rack and pinion steering and suspension. If anything, the King Cobra (and the Cobra II) paved the way for Fox body, which may be ugly but is a hell of a track vehicle.