Antron Brown is turning the NHRA Mello Yello Top Fuel Championship into a runaway, claiming his third win in the Countdown at the AAA of Texas Fall Nationals at Texas Motorplex.  Matt Hagan wouldn’t be denied against Funny Car points leader Ron Capps in the fuel coupe final, while Drew Skillman drove to victory in Pro Stock and Eddie Krawiec is riding to two-wheel stardom, taking over the lead in the Pro Stock Motorcycle points standings with Las Vegas and Pomona coming up. 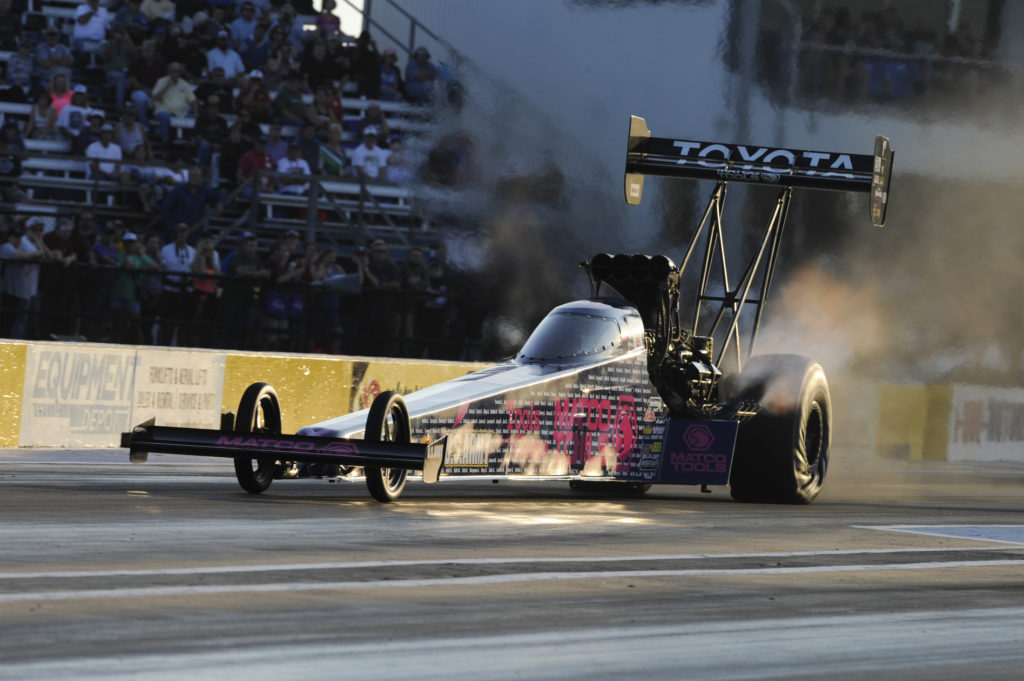 Antron Brown all but sealed the deal in the Top Fuel category, scoring his third win of four in the NHRA Countdown to the Championship and his seventh title of the 2016 season on Sunday.  It marks the 61st win of his Mello Yello Drag Racing Series career, with 45 of those coming in Top Fuel competition.  With today’s win at the Motorplex, Brown has reached the finals in five of the last seven races and advanced to his 11th final round of the season.

“The dream is coming true today – it’s happening one round at a time,” Brown said.  “I am truly blessed to be on this team with (crew chiefs) Brian (Corradi), Mark (Oswald) and all these boys.  We work hard and it’s a team effort.  I’ve got to give a big shout-out to Jimmy Prock, Chris Cunningham and also John Medlen (from Don Schumacher Racing’s Infinite Hero Funny Car team).  After St. Louis, we were a little down and they gave us the boost we needed when we stayed after and tested.

“We made some things happen and it’s paying big dividends right now.  This competition is no joke.  Look at that final right there: it’s Steve Torrence, a hometown boy; it was a tough matchup and I knew it was going to be tough.  He threw down a great tree, they threw down a great run, and we threw down a great run.  That race could’ve gone either way.  That’s how all of our NHRA drag races have gone all year long and we’ve been fortunate to be on the right side of it.  We’re just trying to make it happen and we love it.” 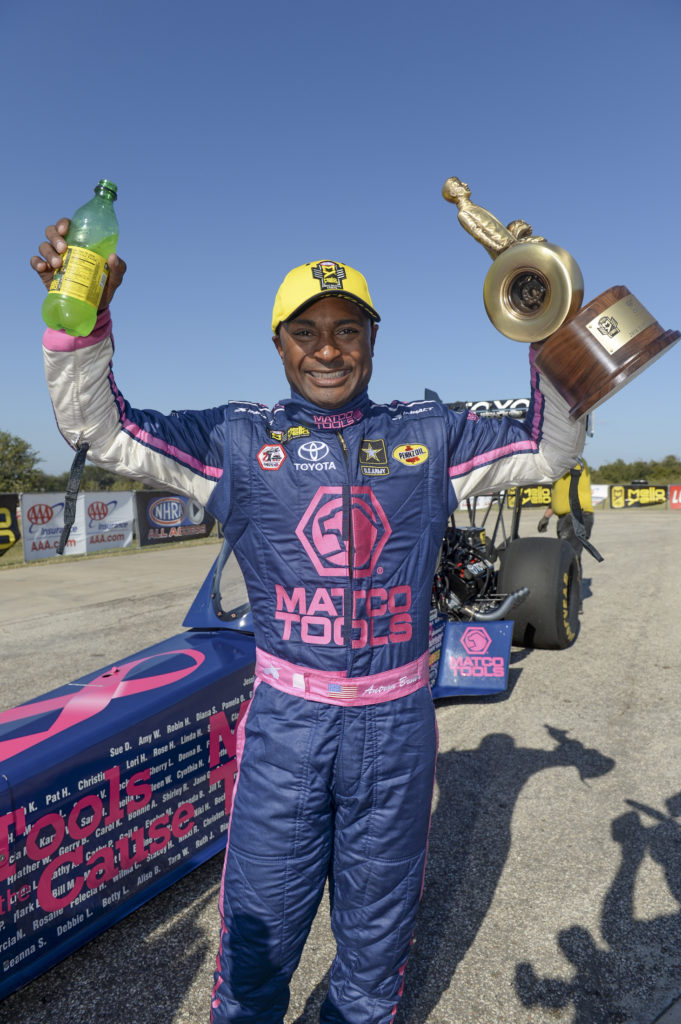 Brown has guaranteed that he will lead the series in wins for the fourth time in the last five years with just two races remaining.  He also will take a 150-point lead into the next race (each round win on Sunday pay 20 points) with eight rounds remaining.  He can clinch the title at the next race in Las Vegas.  It would be his third Top Fuel world championship in the last five years.

“That’s called teamwork, that’s called when the pressure gets up.  I think that’s what brings out the best in our team.  Our team thrives on pressure – where some teams might crack or folds, some teams get better.  When the higher the pressure gets, it seems like it dials our knob up even more and we put that extra focus in.  We all feel it.  We can look at each other without even talking about it and know where we need to be.  Every time we go down that racetrack, it’s like, alright now we have the next round.

This is the coolest part that I think makes our team so good: we never look at the whole race.  We take it one step at a time.  Every step that we take, we try to be efficient with it and make the best out of it.  I think that’s what pays big dividends when we look back.  We look at all the baby steps we made and all the right ones that got us where we needed to be.”

In eliminations, he defeated Chris ‘The Greek’ Karemesines, Doug Kalitta in a championship deciding round, and J.R. Todd in the semi-finals.

It was a tough final round for Brown, between Steve Torrence running a time of 3.744 seconds at a speed of 321.12 mph to Torrence’s time of 3.750 seconds, 323.12 mph to claim his one-of-a-kind Texas Motorplex Cowboy hat for winning. 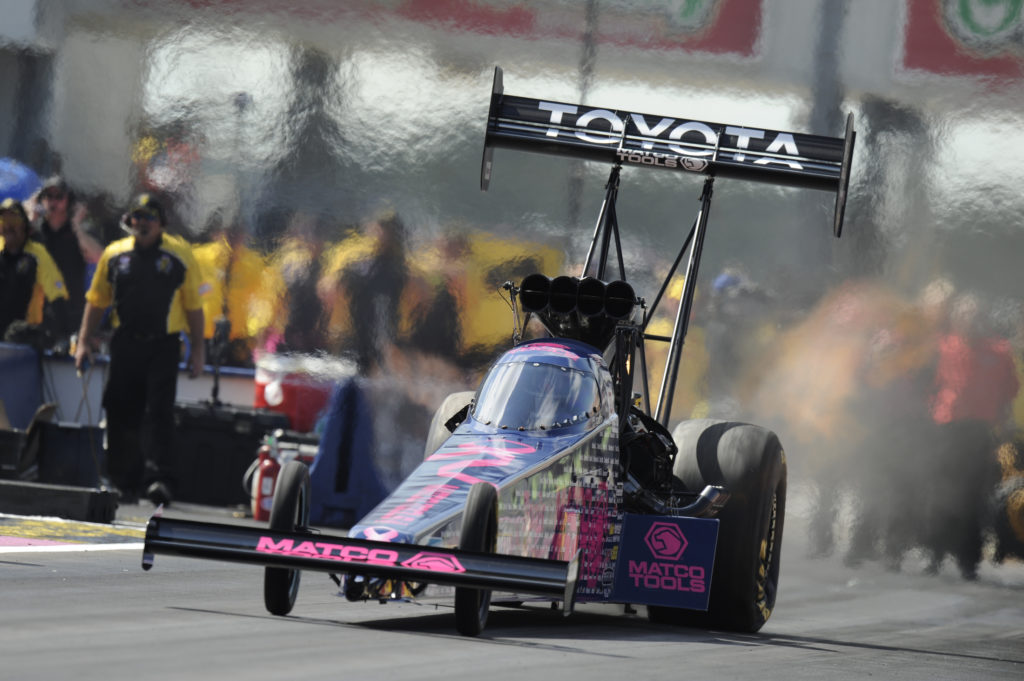 Runner-up Steve Torrence in nearby Kilgore, Texas marched through eliminations, defeating Clay Millican, Leah Pritchett, and a resurgent Shawn Langdon in the semi-finals placing in fifth in the standings.  “We really needed to beat Antron to have a shot at the title,” Torrence said, with only one round win in 20 races against Brown, “but those guys are bad ass.  My only hope now is that when Antron comes back to Kilgore with me this week, maybe I can hold him hostage.  Even if we don’t win the championship, though, it’s been a great year for Capco, Rio and Torrence Racing.  It’s our best finish ever and my best season as a driver.  That’s very gratifying.”

All Brown needs to do is leave Las Vegas by a minimum 131 points and he gets the crown for his third championship.  He has amassed 51 round wins this season, matching their round win total from 2015 with two races remaining.

“The only way you win now is by inches, and to win that final right there was monumental for our team because we needed to do that.  We are going into Vegas; we have a little bit of a points lead but it’s anybody’s game.  Our main focus is to stay humble, keep our heads down and continue the hard work that’s got us here.  That is a crucial moment for us right now.  We’re still not done working.  We can’t wait for Vegas and the Toyota Nationals.” 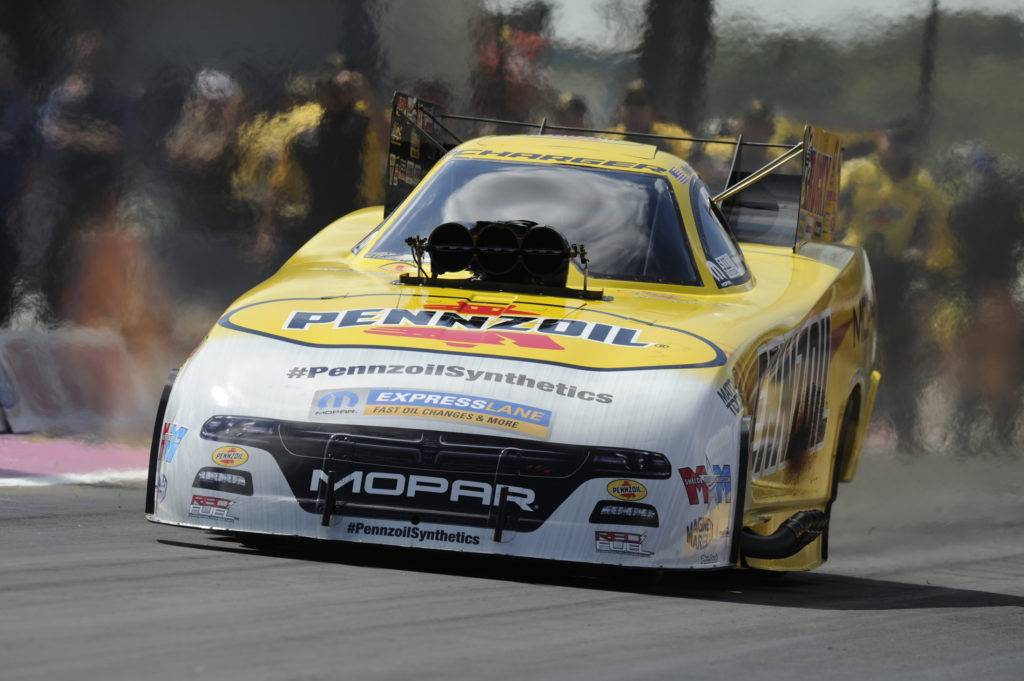 Two-time Funny Car champion Matt Hagan powered to his fourth win in six final round appearances this season on Sunday at the AAA Texas NHRA Fall Nationals at the superfast Texas Motorplex near Dallas.

“That’s a huge (final) round,” Hagan said.  “Unfortunately we faced him (Capps) late in the race.  In Reading, we had him in the semis and he left on me and spanked me on the tree.  This time I got to leave on him and get a little payback.  He’s a great guy, great individual and one of those guys that took me under his wing when I first came out here.  I have lots of respect for him and I know he’s digging deep and working hard but we have a job to do for our sponsors and all those folks that support us.  I actually try to minimize everything out of my control and just focus on leaving on time, keeping it in the groove, and turning on the win light, and let the rest take care of itself.  We can’t worry about who might mess up or how many rounds someone might go; we just need to do the best job we can and turn on as many win lights as we can.”

The first seven runs by his DSR Funny Car Pennzoil team were in the 3.8-second range.  The only run missing the magic bracket was in his final race against Capps, when Hagan’s quicker reaction time won on a holeshot to beat Capps’ quicker Dodge.  His .038 reaction time was just enough of a lead to beat Capps, winning on a hole shot with a time of 3.913 seconds, 327.03 mph to his quicker elapsed time of 3.906 seconds, 322.19 mph.

“We race heads up and that’s the way it’s going to be,” said Hagan, collecting his second Motorplex win.  “When you earn a championship that’s what makes you feel good, that you earned it.  We’re just keeping the old boy honest.  I love him (Capps) to death and it was cool to see him in the final, but I was glad to see that win light come on in our lane.  We’ve had to get through some pretty tough cars today and had a little bit of luck go our way.” 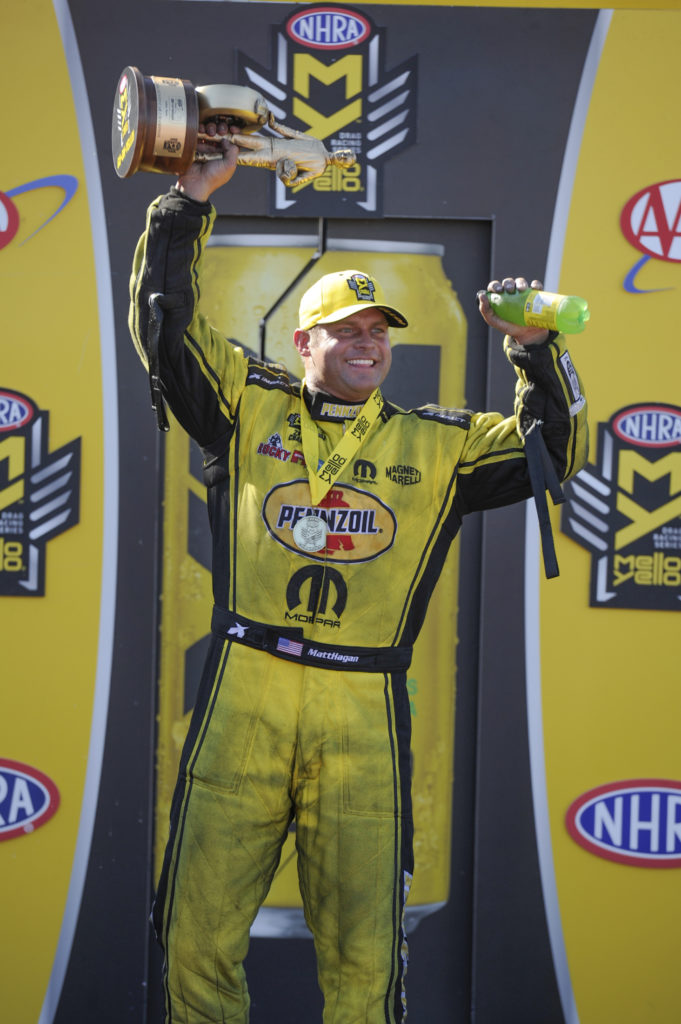 Going into the finals Ron Capps had a 24-15 record against Hagan and a 3-2 final round score, but was still satisfied with his day.  “I’m sure later tonight we’ll reflect on the weekend and the amazing things we accomplished,” he said.  “Right now it bothers me that I had the quicker car against Matt in the final and he beat me on a holeshot.  I guess if you live by the sword you die by the sword.”

Hagan and the Pennzoil team moved into third in Funny Car points standings after the win with two Countdown to the Championship events remaining in 2016.  With their win, they pulled within 88 of leader Capps and 22 of DSR teammate Tommy Johnson Jr. in second. 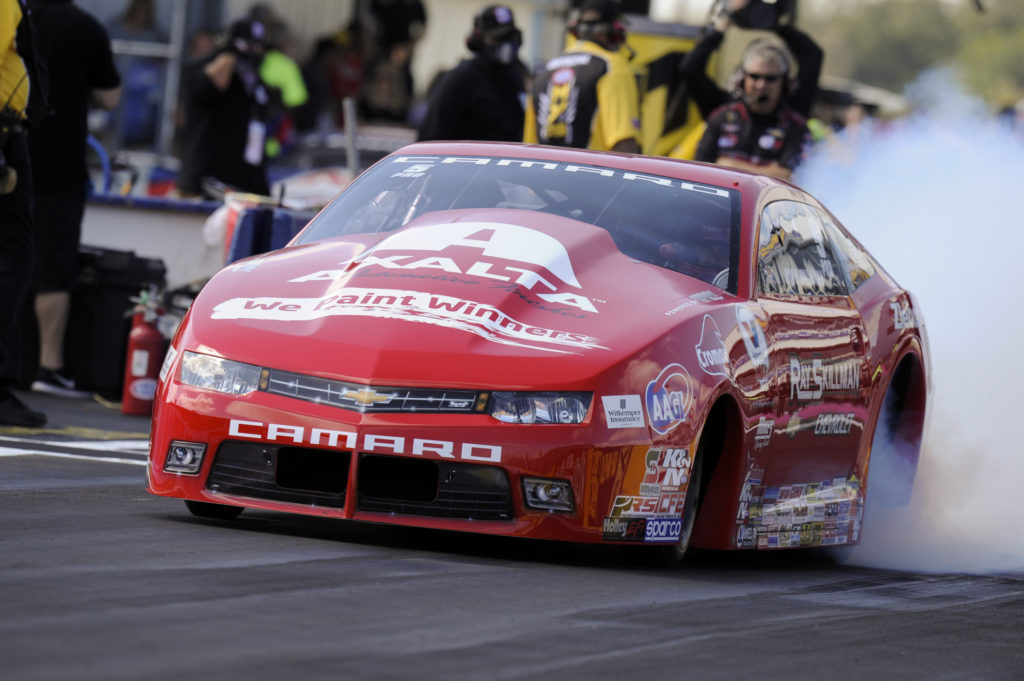 Drew Skillman notched a run of 6.661 seconds at 209.36 mph in his Gray Racing horse powered Chevy Camaro to knock off Alex Laughlin’s 6.708 at 208.30 in his Chevy.  Skillman, who won earlier this year in Brainerd, Minn., tallied his third career win with the performance.  This was his first final round appearance and win at Dallas.  The 2015 Rookie of the Year award winner moved to sixth in points.  He eliminated Chris McGaha, points leader Jason Line and Shane Gray in the earlier rounds.

“We have struggled so badly with this race car,” said Skillman.  “We were lost, and going into the Countdown that’s the worst time of the year to be lost.  We had some luck on our side this weekend.  I drove decent, and the car at least went.  We’re going the right direction, I think.  We need to test again.  We’re going to get back out there.  We’re going to hit these last two races hard, so that’s where we’re going to go.” 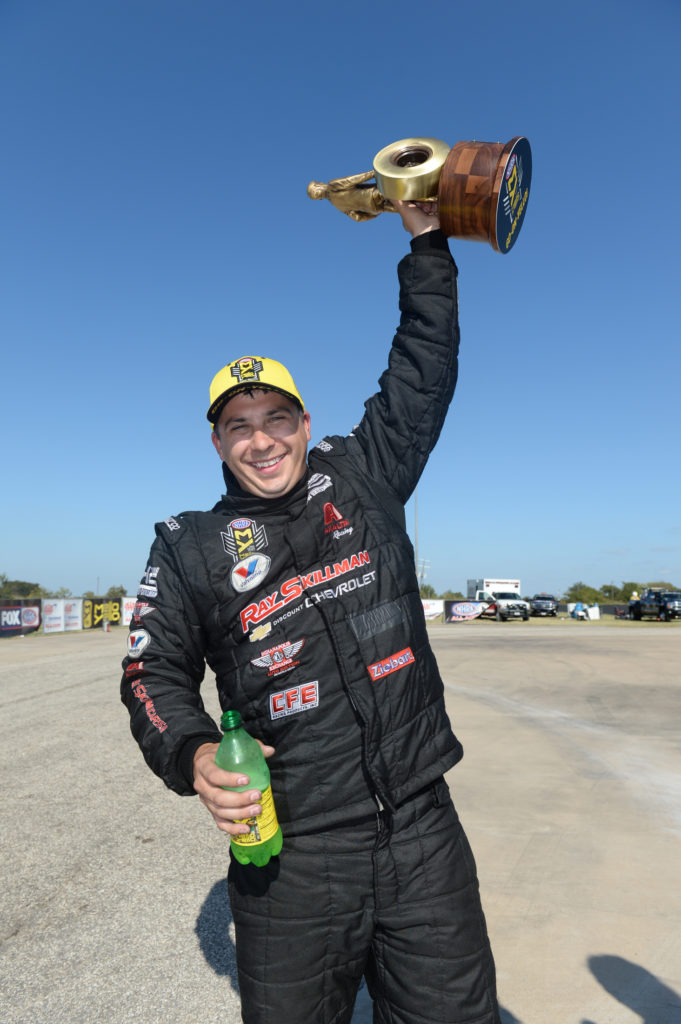 Laughlin, who claimed his first career victory recently in St. Louis, raced past five-time world champion Jeg Coughlin Jr., Shane Tucker and second-place Greg Anderson. Laughlin did not qualify for the Countdown to the Championship. 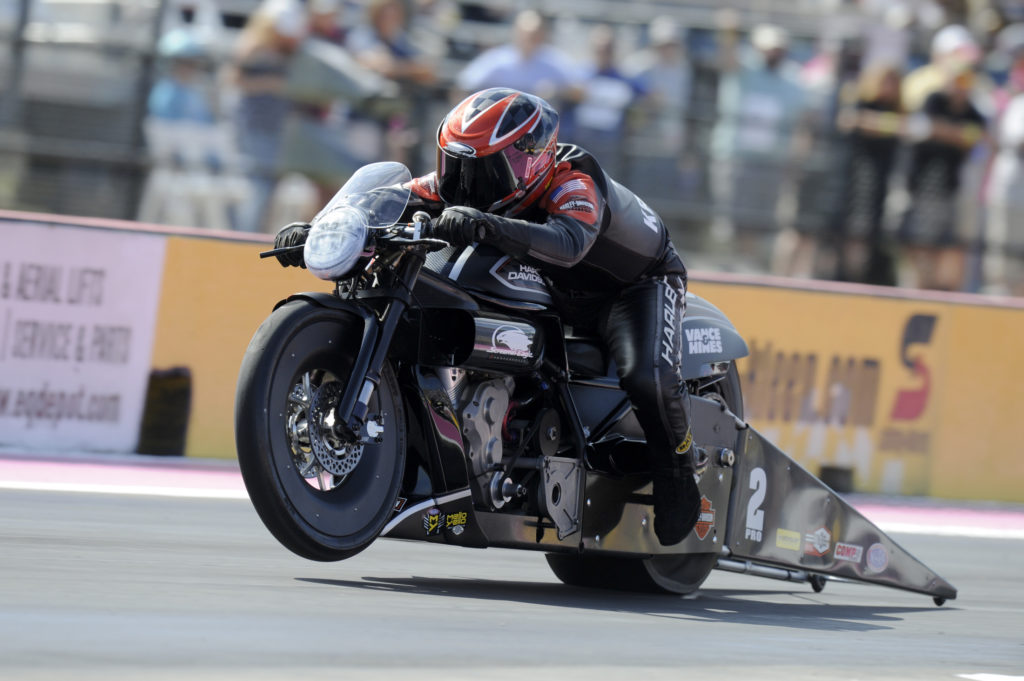 Eddie Krawiec rode his Vance & Hines Harley-Davidson to a time of 6.880 seconds at a speed of 196.36 in the Pro Stock Motorcycle final round to cross the finish line before Jerry Savoie, who posted a 6.856 at 196.76 on his Suzuki.

Krawiec claimed his fifth win of the season, 36th of his career and second at the Texas Motorplex.  Krawiec beat Karen Stoffer, Hector Arana and LE Tonglet to appear in his seventh final round of the season.

“Anytime you’ve got to race [Savoie], you’ve got to be focused,” said Krawiec, who now has a 17-point lead over teammate Andrew Hines.  “As a matter of fact, you have to be focused for just about anybody out there.  When you look at this category as a whole right now, it’s some of the best racing that there could be.  You see LE (Tonglet) came up from nowhere and took Andrew out, then I’ve got to run him, and we run almost neck and neck with each other.  You have to be on your game every single round here, no matter who you’re racing and who’s in that other lane.” 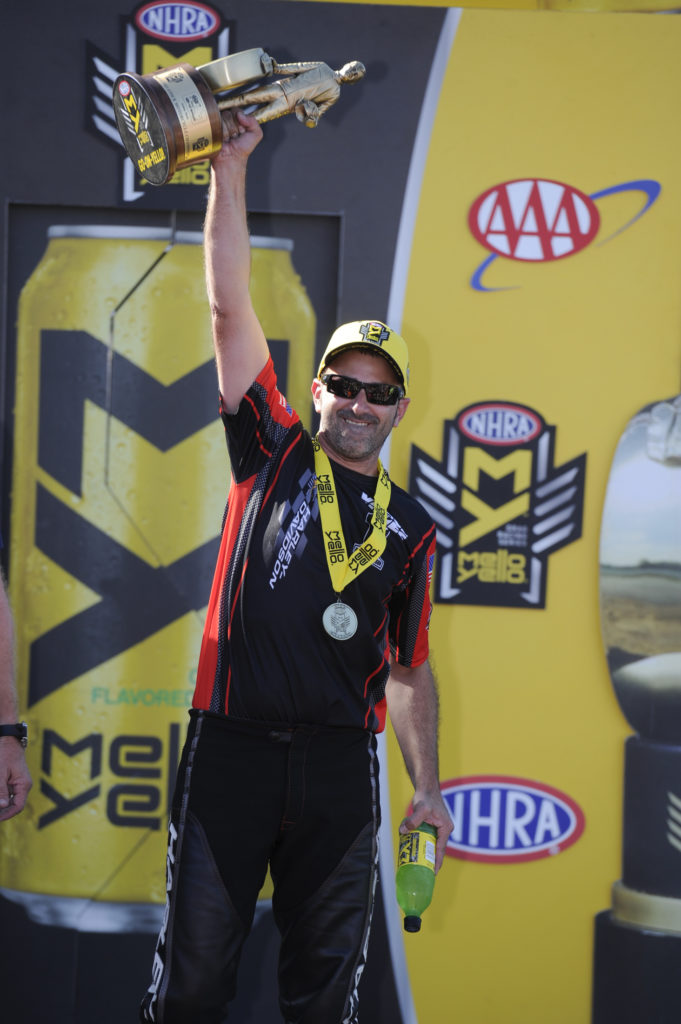 The NHRA Mello Yello Countdown to the Championship continues at The Strip at Las Vegas Motor Speedway, Oct. 27-30, with the NHRA Toyota Nationals. 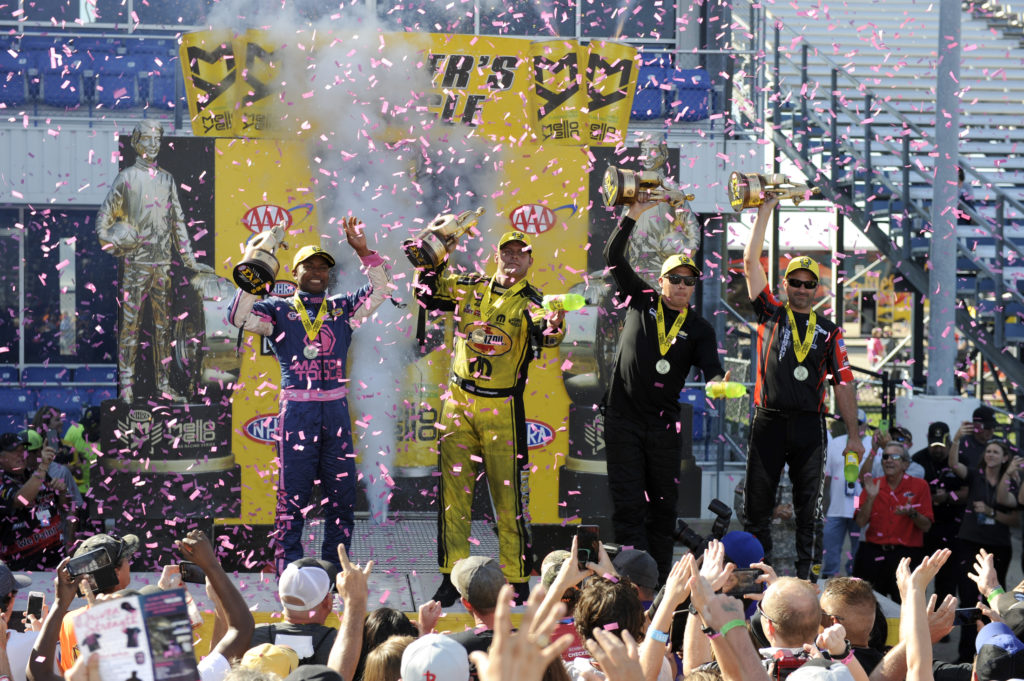