The Newport, TN native was unsure if he and his Jimmy Owens Racing team would even compete at Fayetteville Motor Speedway over the weekend.

“We were kind of up in arms about even coming to this race,” said Owens. “That is, until Fayetteville Motor Speedway’s promoter, Jim Long, called and personally invited us. I knew then that we needed to do whatever it took to compete.”

It quickly became obvious that the veteran dirt driver was meant to compete in this popular race as Long kicked off the race weekend after winning the 10-lap Big C Dash for Cash, which honored the late Carlton Lamm. After collecting this $2,001 win, Owens started on the pole for the 100-lap finale beside defending World of Outlaws Champion Brandon Sheppard. 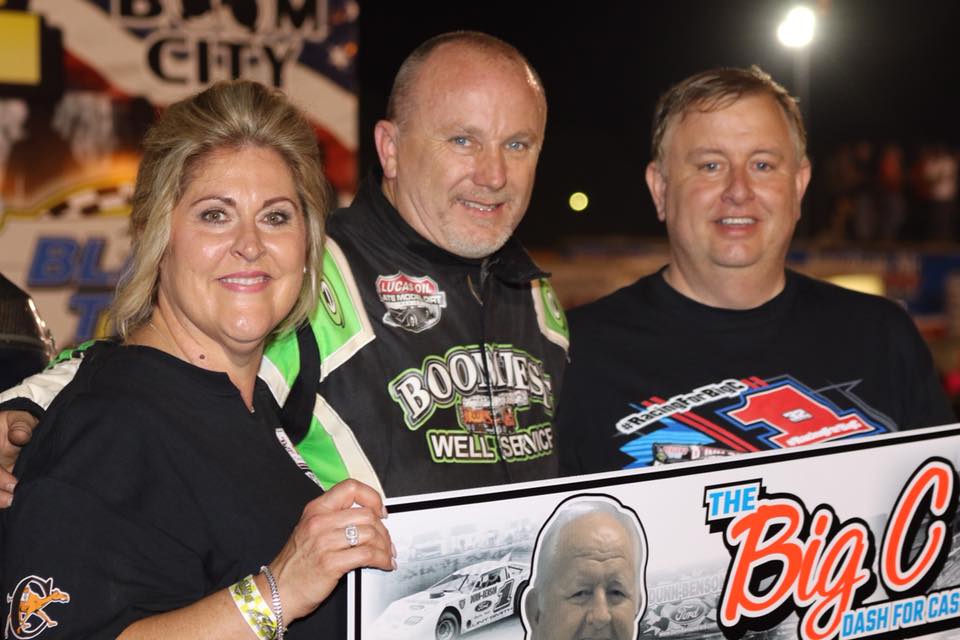 Although Sheppard took the lead position from Owens on the first lap of Saturday night’s feature race, the Newport Nightmare found a renewed momentum on lap 16 to overcome the New Berlin, IL driver on the high-side to obtain the lead and prove he was the driver to beat at Fayetteville Motor Speedway.

“The track got rubbered up about halfway, but you can’t do anything in 90-degree weather,” said Owens. “The guys at Fayetteville Motor Speedway did their best to give us an awesome racetrack and I was able to pass for the lead.”

Despite fourteen separate cautions, Owens continued to hold his own even during a late race caution that brought out a green-white-checkers style finish. After, Owens was able to pull away from Sheppard by 1.128 seconds by the time the checkers fell. This win would give the driver who was even unsure of whether he would even compete in the inaugural First in Flight 100 earlier last week his first $25,001 World of Outlaws victory this season.

“This win was amazing,” said Owens. “I am so honored to dedicate this to my brother, who was in the hospital while I was racing and was the biggest reason that I almost chose to stay home versus heading to Fayetteville.”

While Sheppard thought that his effort on the long runs would earn him Saturday night’s feature win, he would come up a bit short to the veteran predecessor.

“I was pretty good on the long runs there and Owens was definitely slowing down to reserve tires,” said Sheppard. “In the beginning, I got out front there and was slowing the pace up and off a restart; he just got up on the wheel and did what he had to do and got back by me and that was the end of it for me. All and all, it was a pretty good night. Second place may not have been the result that we wanted, but we’ll take it, and congratulations to Jimmy and thanks for all of the fans for coming out.”

Both Sheppard and Owens as well as the other champions from the World of Outlaws Craftsman Late Model Series will continue their battle at Atomic Speedway, for the Outlaw Invasion $10,000-to-win doubleheader weekend, May 18-19. For more information, check out woolms.com.