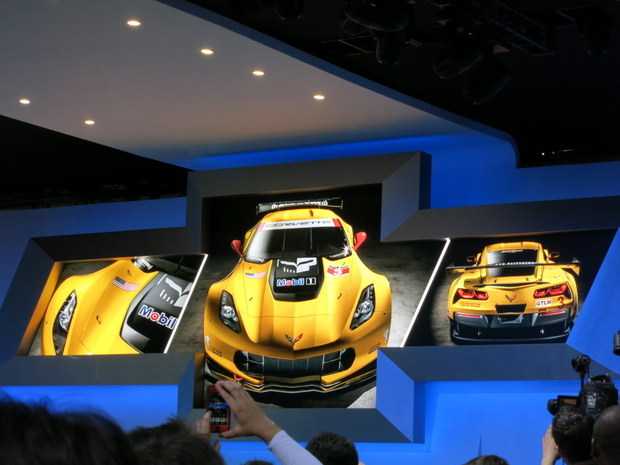 While several companies showed off performance oriented vehicles at the 2014 North American International Auto Show in Detroit’s Cobo Hall, none of them grabbed (or deserved) as much attention as the new Chevrolet Corvette. After the 2014 Chevrolet Corvette Stingray garnered the lion’s share of attention at the 2013 show, the new high performance Z06 package and the new C7R race car made their grand debut and effectively stole the show.

General Motors hasn’t offered up exact specifications on either of the new high performance Chevrolet Corvettes that debuted earlier this week but we know that the 2015 Corvette Z06 is guaranteed to offer “at least” 625 horsepower and 635lb-ft of torque from the new supercharged LT4 V8. Like the 2014 Corvette Stingray, the 2015 Z05 uses a rear mounted transaxle setup with the buyer’s choice of a 7-speed manual transmission or an all-new 8-speed automatic transmission. This is the first time that the Z06 has been offered with an automatic transmission but those who are concerned about a lack of performance can rest assured that GM knows what they are doing. In fact, the company claims that this new 8-speed automatic gearbox will offer faster upshifts than the dual clutch offered in the new Porsche 911.

Much like the C6 Corvette ZR1, the 2015 Chevrolet Corvette Z06 will feature the Magnetic Selective Ride Control system, a super lightweight chassis and body panels that offers improved aerodynamics compared to the base Corvette and option carbon ceramic brakes that will work with the LT4 engine and the pair of transmissions to guarantee that the new Z06 is indeed the best performing Corvette of all time. The downside (if there is a downside) is that with the C7 Z06 offering so many of the features of the C6 ZR1, the ZR1 is probably not going to be offered anywhere in the near future. In fact, GM reps have told multiple sources that there is no ZR1 currently in the works but with so little competition from any other automaker in the world for the price – the new Z06 should be more than enough to give GM fans and owners plenty of bragging rights.

Alongside the 2015 Chevrolet Corvette Z06 at the 2014 NAIAS is the new Corvette C7R race car. Finished in the livery of the championship winning Corvette American LeMans Series #3 race team, this black and yellow Corvette is a gorgeous application of the 7th generation Corvette exterior design. Although the drivetrain layout is similar to the C6R that was driven to the 2013 ALMS driver’s championship, a new direct injection system will make this newest Corvette race car more fuel efficient and in the world of endurance racing – better fuel economy can be the difference between a win and a loss.