With the new Dodge Charger Daytona SRT EV concept, Dodge may have pulled off the impossible — an EV ready to kick butts and take names.

The rumors have been swirling since Dodge teased it last year: an electric muscle car that was ALL muscle.  Turns out, they weren’t kidding.  Welcome to the fold, Dodge Charger Daytona SRT, you look SMOKIN’ hot.

The concept was released during Dodge’s Speed Week unveilings, which included another year of the Durango Hellcat SRT, swan songs for the ICE Charger and Challengers, and a few other exciting reveals, but the EV muscle car concept was clearly what the crowd was waiting for. Turns out, it looks worth the wait. Dodge certainly thinks so.

“The Dodge Charger Daytona SRT Concept exists because performance made us do it,” said Tim Kuniskis, Dodge brand chief executive officer – Stellantis. “Dodge is about muscle, attitude and performance, and the brand carries that chip on its shoulder and into the BEV segment through a concept loaded with patents, innovations, and performance features that embody the electrified muscle of tomorrow. The Charger Daytona SRT Concept can do more than run the car show circuit; it can run a blazing quarter-mile. And when it comes to product cycles, it outruns Darwin. Charger Daytona does more than define where Dodge is headed, it will redefine American muscle in the process.” 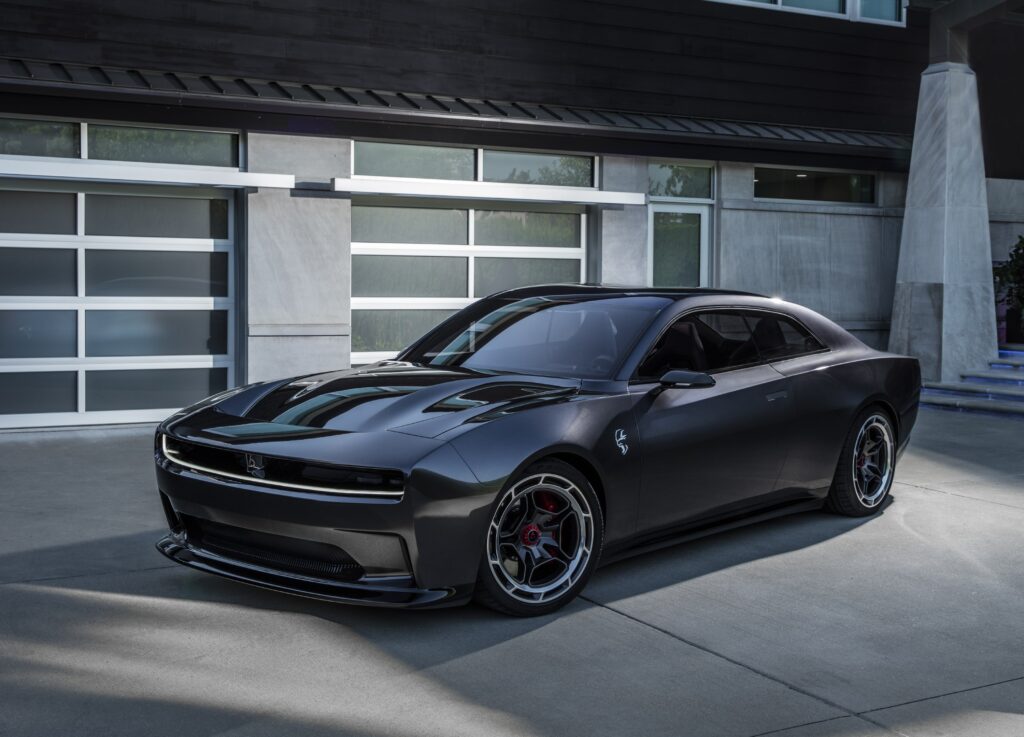 The Charger Daytona SRT takes the Dodge muscle car aesthetic and amps it up to 11, with a patent-pending R-Wing front end which references the classic Dodge take in a more aerodynamic configuration.  And while a small detail, the  illuminated Fratzog badge is a reminder to fans that Dodge means business in the muscle car world, referencing the golden years of muscle madness — 1962 to1976.

The BEV (battery-powered electric vehicle) will feature be powered by the new 800V Banshee propulsion system, a new powerpak from Dodge that claims more power and performance than the Hellcat engine.   The eRupt multi-speed transmission with electro-mechanical shifting, plus the PowerShot push-to-pass acceleration feature on the steering wheel both contribute to the hands-on performance qualities of the EV concept.

Add to that a the Fratzonic Chambered Exhaust, which pushes its one-of-a-kind performance sound through an amplifier and tuning chamber located at the rear of the vehicle and you’ve got a muscle car that looks, sounds AND acts like a true muscle car, electric or not.

Despite referencing the past, the Charger Daytona SRT will be all future — the interior will be a nod to Charger’s of the past while featuring a modern console, a steering wheel that both looks like its floating while offering paddle shifters and multiple driving modes, plus a glass roof for rear passengers to take in the view.

If Dodge can pull off what it’s promising in this concept, the EV game really will have changed.

All images courtesy of Stellantis

7 Comments on The Future of the Muscle Car is Here: Dodge’s Charger Daytona SRT Concept