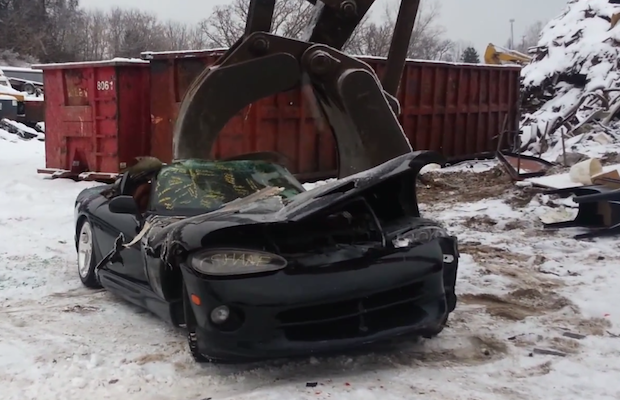 The internet has been abuzz yesterday and today with the news that the Chrysler Group had ordered 93 of the first Dodge Vipers built in the early 1990s to be crushed after they had originally been given to technical schools around the country as learning tools. Many large media sources have gone out of their way to villainize the Chrysler Group and parent company Fiat SpA for not trying to preserve these historic performance cars but the vast majority of those reports are chock full of bad information. Also, there are some important details about these cars that sentenced all of them to death from day 1.

First, the reports indicate that the Chrysler Group has ordered these 93 pre-production Dodge Viper roadsters and coupes to be destroyed by the schools who possess them because there were two accidents in which someone was hurt while driving these cars and those accidents led to multimillion dollar lawsuits. These lawsuit rumors claim that students at two of the schools took their school’s Dodge Viper out for a joyride and while on said joyride – they crashed the car. These reports also claim that since the Chrysler Group only lent the cars to the schools and they technically still own them, the automaker was on the hook for these million dollar lawsuits.

These Dodge Vipers were originally given to technical schools so that kids attending these schools could work and learn on sports cars that were on the cutting edge of high performance technology. As the reports suggest, the automaker has instructed the schools in possession of them to send them off to the crusher but this has nothing to do with kids joyriding in these cars, crashing these cars or any million dollar lawsuits stemming from the supposed joyriding crashes. Chrysler issued a statement about 12 hours after the fury of the Mopar faithful hit the intrawebs, explaining that part of the donation process is that the cars will be destroyed once they are no longer needed.

To be exact, this is what Chrysler had to say about the crushing of the Dodge Vipers ordered to the crusher:
Approximately 10 years ago, Chrysler Group donated a number of Dodge Viper vehicles to various trade schools for educational purposes. As part of the donation process, it is standard procedure — and stipulated in our agreements — that whenever vehicles are donated to institutions for education purposes that they are to be destroyed when they are no longer needed for their intended educational purposes. With advancements in automotive technology over the past decade, it is unlikely that these vehicles offer any educational value to students. Chrysler Group fully understands and appreciates the historical significance of the Viper and is very active in preserving many of its legendary models and designs for historic purposes however, none of these vehicles fit into this category.

Chrysler Group has no record of any legal proceedings involving Dodge Viper vehicles donated to educational institutions being involved in accidents and product liability lawsuits.

In other words, these early Dodge Vipers were destined to be destroyed as soon as they were donated to the schools.

Second, and most significantly, is the fact that the Dodge Vipers being sent from tech schools to crushers are not normal production vehicles. The mainstream media has focused on the very first Viper GTS Coupe, pre-production VIN #4, which looks very much like a normal production GTS Coupe but this car was built years before the first Viper GTS ever saw the light of day. That car is unquestionably a historic piece of automobilia that any collector would love to own. In fact, reports indicate that Jay Leno has attempted to purchase this early Viper Coupe and was turned down due to the pre-production status.

Even if Chrysler didn’t plan to crush these Dodge Vipers as part of their school donation process, the fact that they were pre-production guaranteed that they would never be sold to the public. Every component of every vehicle sold in America is approved in one way or another before they can be sold to the public but pre-production vehicles do not have to meet the same approval process. Pre-production vehicles do not have to pass federal crash safety tests or meet any state emission requirements but they are approved for street use by the US Department of Transportation under special guidelines for pre-production cars. These vehicles don’t have meet any of the standards or requirements of vehicles being sold to the public and in exchange for the ability to drive these cars on the street for real world testing purposes, the automakers agree that these cars can never be sold to the general public. The Vehicle Identification Number shows that each car is pre-production and because of that, they cannot be sold and they cannot be registered to anyone other than the automaker that built the car.

Even if the 93 early Dodge Vipers weren’t slated for production as soon as they were donated, their pre-production status guaranteed that they could never legally be sold under federal law.

It is devastating to anyone who loves American performance cars but the sad reality is that pre-production cars are regularly destroyed after they have served their purpose because automakers cannot sell them.

Finally, a great many of the Mopar lovers who are distraught about the tragic demise want for the Chrysler Group to simply take these cars back and find museum homes for them all. The first problem with this idea is that there are (or were, as some have already been crushed) 93 Dodge Vipers on this list. While it might not be a problem for the Chrysler Group to find museums around the world to take 5, 10 or maybe even 20 of these cars – there are only so many museums that could make a place for a Dodge Viper. Next, these cars are pre-production so the fit and finish might not be up to the same level as the cars sold to the public so the automaker doesn’t want cars in museums that have poorly fitting fenders or interior components that were mocked up for testing. There is also the fact that these cars have been wrenched on by technical school students for the last ten years so Chrysler would have to find enough museums to take 93 Vipers that have been worked on by kids for a decade which may also have components that don’t look right.

These 93 Dodge Vipers are prohibited by federal law of being sold to the public, they aren’t nice enough to serve as museum pieces and they are contractually slated for production once the schools in question are done with them. It is sickening to think about these 93 early American supercars will be crushed while so many of us would pay to own them – they were all slated to meet the crusher the day that they were produced like most other pre-production vehicles built in the USA.