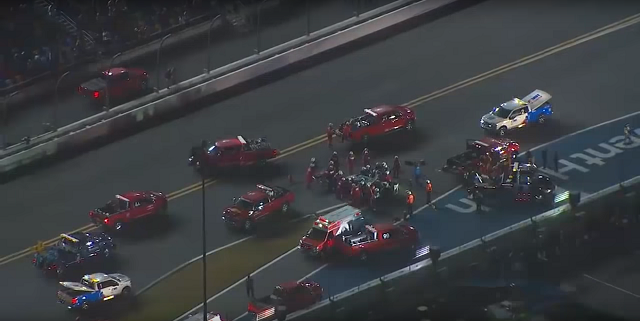 The 62nd Daytona 500 has been run. Denny Hamlin won for the second-straight year. It took two days to conduct NASCAR’s premier race and, by the way it ended, there will be more than two days’ worth of discussion about the results, even as the NASCAR haulers wend their way west for this weekend’s race at Las Vegas Motor Speedway.

The last-lap accident that seriously injured veteran Ryan Newman is on every race fan’s mind. It was one of the biggest of the “Big Ones” NASCAR’s restrictor plate races regularly produce. Accidents with many cars involved are the hallmarks of races at Daytona International Speedway and Talladega Superspeedway, where restrictor plates decrease the usable horsepower and cause the 40 drivers to bump-draft their ways, hopefully to the front of the pack.

That’s what occurred last night at Daytona; it’ll happen again at other tracks and be dismissed, just as race-fans will forget what happened to Newman, one of the few college graduates in the NASCAR Cup Series’ fraternity. While we don’t know yet all the ramifications of Ryan Newman’s crash, we did see that screens were set up around his car so that extricating the driver wouldn’t be captured on video.

Denny Hamlin didn’t know the extent of Newman’s injuries when he crossed the finish line first; neither did team owner Joe Gibbs. The driver began his celebrations on the grass verge by the start/finish line and headed to Gatorade Victory Lane, where he and his team were apprised of Ryan Newman’s condition (as known at the time) and the seriousness of his accident. Suddenly Victory Lane was a much more circumspect place to be.

Racing is dangerous. We all know that. Those of us who have been in the sport for a long time accept the dangers as part of racing’s attractions. While we watch football and soccer players suffer injuries from time to time, we’re pretty certain they won’t be headed to a funeral home due to severity of their injuries on the field. Not so with motorsport.

It was 19 years ago that Dale Earnhardt died when his No. 3 Chevrolet hit the Turn 4 wall at Daytona, just as Michael Waltrip (driving for Earnhardt) cruised to his first Daytona 500 win. It was that accident, and the death of NASCAR’s largest star at the time, that forced the sanctioning body to take a real interest in safety, where it grudgingly did so prior to that February day. Head-and-neck devices became mandatory for all NASCAR Cup Series drivers; amendments were made to belt hookups inside the race cars and attention was paid to the construction and makeup of walls at every track.

Ryan Newman’s accident would not have been survivable in 2001 and for that we owe gratitude to Earnhardt and the safety measures his death propelled to the fore. Racing has been much safer since then and NASCAR has been fortunate to have a dearth of death in its midst. There was a time when a crash meant burning to death trapped inside a race car. That doesn’t happen anymore.

The grandstands were packed – even on a Monday evening – with fans who wanted to see action and the uncertainty that this large oval produces. Ryan Newman may not pay the ultimate price for being in the wrong place at the wrong time, but for sure “serious condition” is not a whitewash of his overall health at this time. NASCAR, the Roush Fenway Racing team and the Newman family have asked for privacy. Let’s give them that and a fair modicum of prayers for the driver’s healthy survival.

3 Comments on The Crash that Left Daytona Silent – Again