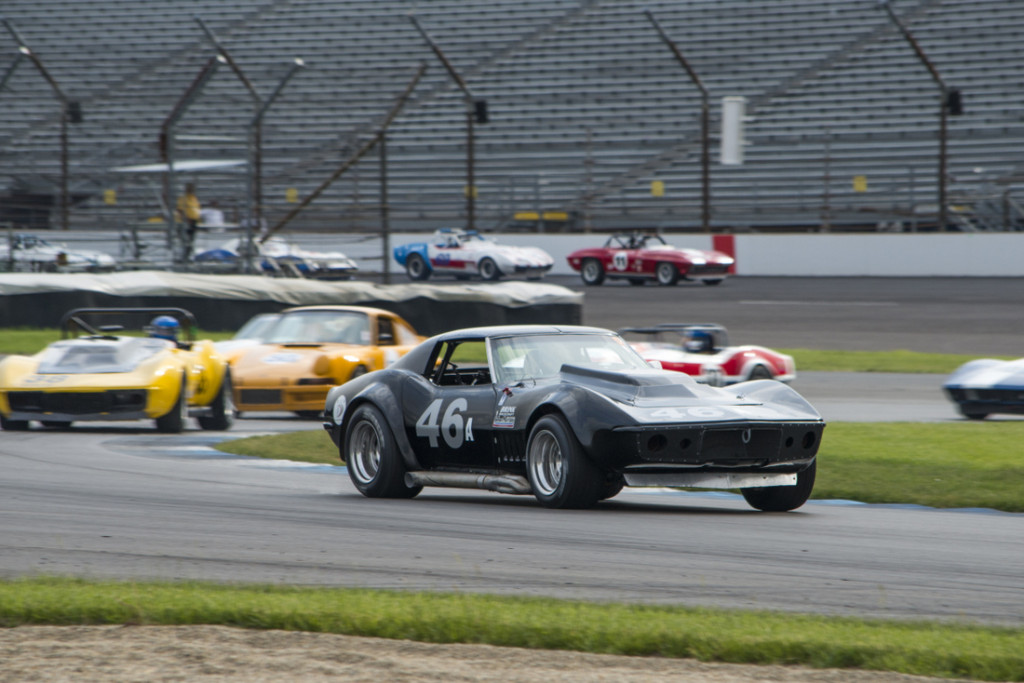 The Sportscar Vintage Racing Association was welcomed to the first ever Brickyard Vintage Racing Invitational at the Indianapolis Motor Speedway June 6-8th. With Indianapolis’ storied history, it’s surprising that this was the first, but after attending the inaugural event, it’s clear that this weekend of non-stop vintage racing action should become a regular thing.

Muscle cars, 100-year-old open wheel cars, vintage NASCARs, British sports cars in famous British Racing Green, and everything else imaginable covered the speedway. Various classes of mixed competition raced in a motor head’s dream come true. And boy, did they race! They mixed pain and traded fenders raced. Champ cars, CART, IRL, IndyCar, and Formula One cars of mixed heritages all faced off against one another, giving fans the opportunity to relive the glory days of the respective open wheel series. The diversity applied to all group competition during the weekend.

One of the most exciting races on Sunday was the Indy Legends Pro-Am Charity race that featured amateur drivers swapping off with pro drivers midway through competition. Fans got to see Lyn St. James, Al Unser Jr., Buddy Lazier, Eliseo Salazar, Willy Ribbs, Scott Goodyear, Alex Lloyd, Robby Unser, Scott Harrington, and many other prior Indianapolis 500 drivers mix it up.

Al Unser Jr. took victory in the Pro-Am class, but watching the entire field of former Indy 500 drivers competing in a muscle car shootout on the road course was a treat for the fans. Lyn St. James in particular was very fast in a1970 Boss 302 Mustang, but not quite fast enough to catch up through the field to the Little Al’s Corvette. St. James did set the fastest lap of the race, but finished in tenth place. St. James also competed later in the day in Group 9 with a 1977 Chevron Formula Atlantic open wheel racer.

The accessibility to the teams, drivers, and track was something unheard of at IMS. Nearly everything except pit lane was open. Spectators could wander around, chat with drivers and mechanics, and check out everything up close and personal in a friendly and laid-back atmosphere. Unfortunately, there was a light fan turnout. IMS has revolutionized itself within the past year and has attracted many more fans in addition to its expanded racing schedule, but this is not an event to let slip through the cracks. It could use a little more advertising. This is no Indianapolis 500, but I still got goosebumps when God Bless America echoed from the loudspeakers and passed through the roar of engines firing on those hallowed grounds. The only thing missing was a flyover with vintage warbirds.