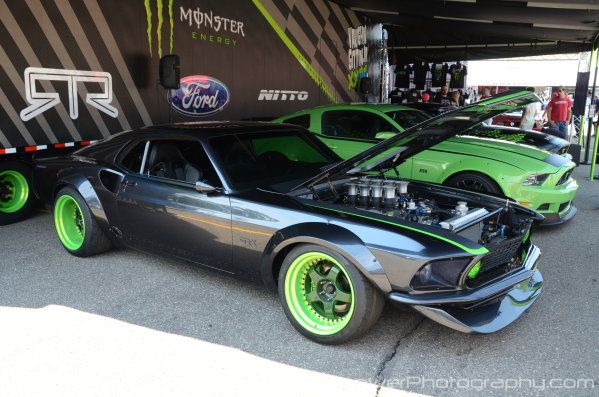 While the main attractions at Detroit’s annual Woodward Dream Cruise are the tens of thousands of privately owned classic and custom cars cruising the famous route, the American automakers have capitalized on the popularity of the event with big, prominent displays that serve as some of the most popular static attractions along the Dream Cruise path.

Each year, the Chrysler Group has a massive display at the corner of Woodward Avenue and 13 Mile Road with General Motors just a half mile or so up the way.  Ford Motor Company opts to close off an entire road that runs perpendicular to Woodward Avenue and when you incorporate the many parking lots along 9 Mile Road in Ferndale, Ford’s display easily covers more than a mile of real estate at the event.

Ford’s is arguably the best of the corporate automaker offerings, featuring more cars and covering more ground than any other display. But while Ford brings out a nice array of new models, the biggest draw is Mustang Alley – a collection of hundreds of privately owned Mustangs stretching along 9 Mile Road and through the parking lots along that piece of road. Ford also has featured displays of their Ford Racing activities, fun for the kids, food for everyone and even a bunch of stands where you can sign up to get a free shirt – usually featuring the Mustang.

The Chrysler Group puts together the second biggest corporate display  and while there are a small number of privately owned vehicles in the Mopar area at the corner of 13 Mile and Woodward, the star of the Chrysler show is the spread of production vehicles. Chrysler rolled out current production models like the Challenger SRT, the Grand Cherokee SRT, the Charger SRT, the new SRT Viper, the new Power Wagon Ram, the Challenger R/T, the Charger Daytona, the Dodge Dart and the new Jeep Cherokee in addition to customized vehicles that have previously been featured at events like the SEMA Show and the Moab Easter Safari. The Chrysler display also offers fans a chance to have their pictures taken in front of popular company vehicles including the awesome Raminator monster truck while also testing their racing skills and pit crew skills in a set of interactive displays. While the Chrysler display doesn’t have the sheer number of vehicles that you get with the Ford display – the Chrysler area gives fans plenty of keep themselves busy when they visit.

Last and technically least is the General Motors display which is located between 13 Mile and 14 Mile Road along Woodward Avenue. The GM display is by far the smallest and because of that, it has the fewest number of vehicles. Unlike the Chrysler and Ford areas, the GM display doesn’t feature privately owned vehicles – instead using every bit of space for production vehicles, customized show vehicles and a couple race cars.’

For those who couldn’t make it to the 2013 Woodward Dream Cruise, we have put together several elaborate galleries offering a look into the best of the Big 3 displays from the big Detroit event. Enjoy!

Other galleries from the Dream Cruise: