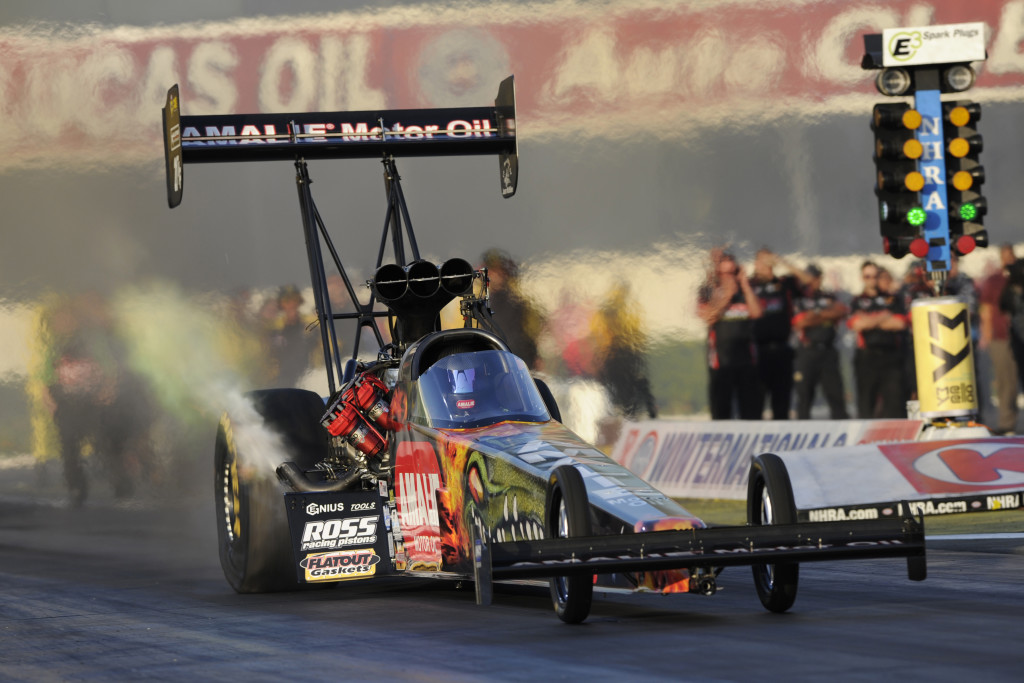 The vociferous Terry McMillen is a drag racing fan magnet.  It’s been quite a long time, almost back to the 1980s, since a driver has topped John Force in the post race category of boisterous interviews, but the Elkhart Lake, Indiana driver isn’t about to slow down after reaching his first final round of his career.   He raced to the very end, turning the bout into a close finish coming up only feet shy against Brittany Force at NHRA’s last race at the Amalie Motor Oil Gatornationals in Florida.

Normally, that would be disappointing, but according to McMillen the feeling after his best finish during his tenure as an NHRA Top Fuel drag racer that began in Richmond in 2007, you would have thought he had won the race with that patented positive attitude that made even his final round loss sound good.  Looking at the current Mello Yello points, he’s fifth, proving his recent run to the head of the pack is no fluke.

“Absolutely, there’s no way I could have ever scripted it any better other than winning the race,” said the 61-year old McMillen, reminiscing of his run.  “Getting beat by Brittany in the finals was a situation that we were more than elated because there have been times when we didn’t qualify for Gainesville, at our own Amalie race.

“So, to go out there in front of the president of the company, having around 400 of our special guests, and our employees all there all I can say is what a way to give back to say ‘thank you’ to the job and the support they’ve given us over the years to allow us to have the opportunity to come out here to compete.  I think right we have the longest running marketing program, as partners, in motorsports.  While we’re very fortunate and blessed to be doing what we do, you’ve got to remember where you came from.  I’ll tell you, if it wasn’t for Amalie and all the wonderful people that buy the Amalie products, there wouldn’t be a Terry McMillen out here racing.” 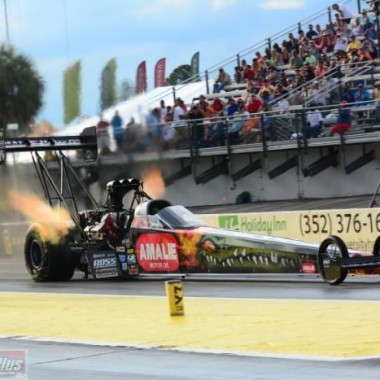 As the rounds wins came in Gainesville, it just amped up McMillen more and more offering spectacular descriptions of every run bringing all those new viewers on NHRA All-Access right into the cockpit taking it home.

Actually, he said that bravado in his interviews that booms over the loud speakers at the track doesn’t come natural to him, but was derived from seeing other drivers over the years knowing and wanting his interviews to be the best and ones that race fans won’t soon forget.

“It’s kind of long story,” laughed McMillen, driver of the Amalie Oil Top Fueler called the XTERMIGATOR for its alligator livery and design.  “I’m not a very outgoing person, but once I get in that racing mode it’s all adrenaline, it all energy, let’s make our sport into something.  You want to have a connection with the fans with what we do because it’s a business, but it’s still to me very personal.

“I remember growing up watching interviews on TV and you would hear drivers say, ‘Ah, yeah, the car smoked the tires’.  I was like, ‘Man, I’m going to do one thing different than that when I do them and at that is – you’re going to get some exercise with me.

“You’re either going to one, get up and turn off the TV because you don’t like me or two – you’re gonna sit there not going to get anything to drink.  You’re going to sit there and watch me talk and then later turn around and get something to drink out of the refrigerator.  But, it’s just something that to me, we need to make sure that we move the people that we’re with because it’s exciting to us.  Vicariously, I think fans live through us in a lot of ways, so if we have the energy then they feel the motivation.  That’s just kind of the way I’ve always analyzed that and thought that it’s the way it should be.  So, when I get in the racing mode, I’m a whole different person.”

That different person of McMillen brings his excitement to the track and back in the pits feels compelled to sharing his time by always being accommodating to fans and it’s their feedback listening to what fans have to say is what gives him his post round inspiration.

“It’s incredible, actually it’s overwhelming,” said McMillen expressing his love of the NHRA Drag Racing fans.  “It was a year ago when I was in Charlotte, I had the mishap with an engine explosion and people took it that I was leaving the sport.  The support was awe-inspiring.  At that point, I really, really realized how many people and fans were out there supporting us and just really appreciated, whom I was and what we were doing.  It made me realize then that our fan base is bigger than I ever thought.

“It’s no matter how good my run is or how bad my run was or how bad my day is fans still want to come up and talk to you.  They want their picture taken, whether they want a hero card or around the car tour.  Think about it, they pay a lot of money to come to these races and it’s our job as owners and drivers to make sure we make their experience as pleasurable as we can.  Chances are we get to see them once a year, so I want to make it tremendous for them.  It’s just my way of giving back to what I’ve been so fortunate to have and that’s an opportunity to race”. 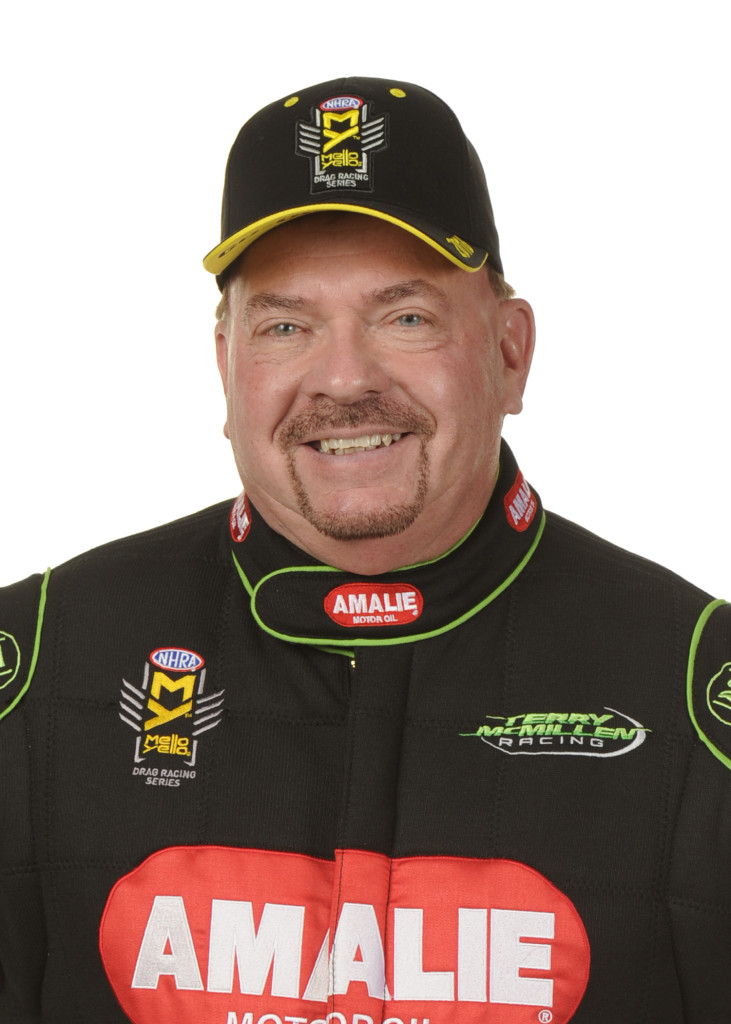 McMillen is rolling along in 2016, racing to two quarterfinals along with his final round finish in Gainesville, placing his efforts up to fifth in the Top Fuel points standings.  What’s impressive are all the ‘major’ names behind him.  It starts with Leah Pritchett, the Phoenix winner in sixth, J.R. Todd, seventh, 8-time champ, Tony Schumacher, eighth, former U.S. National champion, Richie Crampton in ninth and last year’s champion, Antron Brown rounds out the Top 10.  He’s never been this high in the Top Fuel points and has a legitimate chance of making his first NHRA Countdown to the Championship presently finding his Amalie team only 73 points out of the lead.

“That’s a battle because you look at the greats that are behind us.  They are World Champions, almost all of them within their own right, so you when look at that, you have to say ‘Man, that’s a who’s who list’,” exclaimed McMillen.  “We still have a lot of work to do.  I think the key right now is for Rob Wenland (crew chief) to keep doing the great job he’s doing, keeping the crew together, and keeping everyone moving forward on the same page.

“His philosophy has been really simple and that is if the car can get down the track we put ourselves in a better position to win.  Such was the case in Gainesville when we just continually went down the track.  It got us round wins.  If the finals had turned out to be a pedalfest, who knows how it would have ended up.  But, at the end of the day, that’s what’s gets you to the winner’s circle.  We need to be a car that will go down the track 90 per cent of the time on race day, if not more to put ourselves in that position to have the opportunity to be in the Top 10.

“I was once out of it by eight points and another time by 16.  Our goal right now is very clear.  We just have to stay focused, keep doing the same thing we’re doing and still pick up the performance.  The car is trying to perform; it’s just struggling a little bit in the 60-foot area.  If we ever get the 60-foot up, the car is going to go right into the 3.70s.  It’s been trying to run in the 70s for a long time.  Once we fix that, then, we’ll be a contender able to run with anybody on a given day.”

McMillen’s rampage on the track continues this weekend for the DENSO Spark Plug NHRA Nationals on The Strip at Las Vegas Motor Speedway that starts on Friday.

“I think we’re going to do well.  Rob (Wendland) has a handle on things,” stated McMillen.  “The key for us is to keep working on that 60-foot push.  If we continue to focus on that, sooner or later, we’re going to find that combination and then I think we’re going to be deadly.  So, we’re going to keep doing what we have done.  We just have to make sure on race day no matter what, that car it goes down the track.  That’s the only way to put us in a position to race. 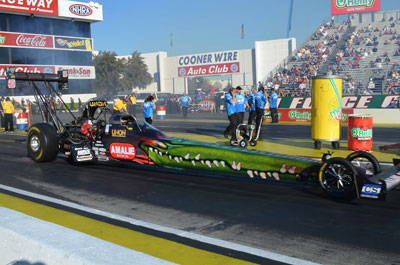 “We know we’re going to get beat.  Sometimes, first round.  If we continue at this rate, we’re going to end up in the top 10.  Our goal is to take it one round a time.  Now, we just need to go to Vegas and keep doing what we’re doing trying to come out of there with round wins and keep our position in the Top 10.”