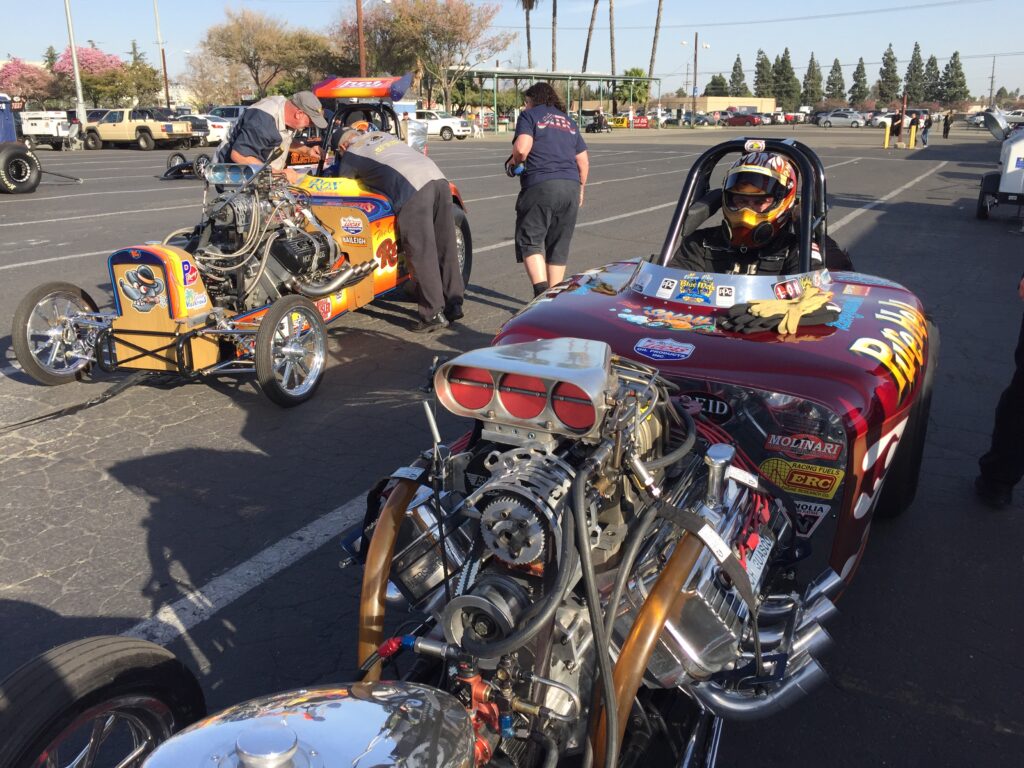 Racing and race technology often go hand in hand. People who love to race recognize the needs of those in their communities and then create an answer to that need. Or, vice versa, they see the need and then, once around racers, can’t help getting bitten by the bug.  One of those needs is storage, whether at home or in the race trailer and TechnoCraft Trailer Cabinets builds quality custom aluminum cabinets for multiple applications, including said race trailers.  Brian and Rebecca Hope, owners of TechnoCraft , are also heavily involved in racing. Brian acts as crew chief for Rat Trap Racing, with his dad Ron behind the wheel of the original Rat Trap fueled altered drag race car. They are also involved in landspeed racing in Blytheville, AR, and Bonneville with several cars, which has become a multi-generational family affair with grandparents, parents and children behind the wheel.
When the Hopes aren’t at the track , they’re at the shop. Maintaining multiple race cars is a full time occupation so they work at TechnoCraft all day and then drive half an hour to the race shop to work on the cars. The day starts at 6 am and runs through at least 8pm or later and, of course, they work most weekends. Despite the schedule,Brian took some time out of a busy day to talk to RacingJunk about combining g the passions of race tech, racing and family. 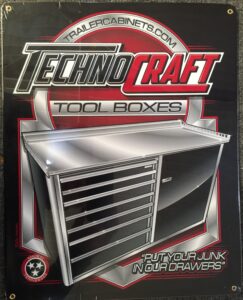 RacingJunk: It seems like racing is a family affair at TechnoCraft!  Can you tell me how all of you got involved/interested in racing?

Brian Hope: I guess racing is in our blood. It was passed down from my Dad, Ron Hope, and just continued to grow.  It is for sure an affair with Rebecca and both kids, Michael and Victoria, being heavily involved.

RacingJunk: Racing on the Bonneville flats is a dream come true for many speed enthusiasts. What’s it like to push your vehicle to the limit on the salt flats? How is it different than say a Nitrofest or typical drag night?

Brian Hope: People ask this question all the time and I am not sure how to answer it.  It is for sure something you have to experience and very difficult to explain.  One thing is once you do it, it is in your blood and you have to go again and again.  Bonneville is so different than anything else we do. It is serious when you are traveling for miles at over 200 mph but the pace is different.  We don’t hurry, there is no rush, we take it easy.
RacingJunk: Tell me about taking the trip to Bonneville as a family and race team, running multiple vehicles. What are the challenges and rewards?
Brian Hope: Bonneville is seven days on the salt that takes 358 days of preparation.  We take 4 cars out to the salt.  We have crew members and drivers and guests from all over the world.  The coordination of flights, hotels, meals and, of course, the trucks and trailers with the cars.  The benefit: annual road trips with our kids Victoria and Michael, watching my mother as a rookie at 69 years old driving her own car, watching Victoria set records, setting a new record on the same day as Dad, being there when Dad became a member of the exclusive Bonneville 200MPH Club at 74yrs old.  This is just the beginning, we aren’t going anywhere.
RacingJunk: I understand that Victoria made it into the 200 mph club at ECTA. That’s a pretty elite club. How did that come about?
Brian Hope: Victoria grew up traveling around the country going to drag races and car shows.  Both kids have quite the list of places they have been in their short lives.  I used to joke that those kids have seen every airport and highway that leads to a dragstrip but not a lot of other places.  When my car was under construction, Victoria made a trip with me to the chassis shop.  She was 15 at the time.  We got there and were doing a little bench racing and the car was up on the chassis jig.  She looked over at me and asked if she could climb up there and sit in the car, when she got up there and sat in it (I think she was making motor noises) she asked if she could drive it.  Of course I said yes! This is my very first race car, a car that I only ever dreamed of owning and now I won’t even get to drive it.  We went to Bonneville when she was 16 and got her licensed with an “A” license. She went 205mph on her “A” license run.  Not bad for a little girl that had very limited experience driving. not to mention driving a race car at one of the most historic places for speed.
When we got home from Bonneville she was chomping at the bit to do some more driving.  We contacted the ECTA and they welcomed us. We loaded up and headed to Maxton, NC for the final ECTA event of the year.  She went 197mph and was a little let down that she fell short of the “2 club” but still good for a record.  The next year we headed back to Bonneville with the sole purpose of this little girl driving. She set a record at 216..522.  Although she set a record in her class she was far short of the minimum for the Bonneville 200MPH Club.  Next stop is the new ECTA location of Wilmington, OH.  Victoria went out right away and set a record of 201 in her class. Just over an hour later, I jumped in the car and joined the club in a different class but the same car at barely over 200.  Daughter/Dad 200MPH ECTA on the same day.
RacingJunk: What are some of the applications of TechnoCraft products that are most useful/utilized by racers and race teams?
Brian Hope: Being racers ourselves, most everything we manufacture is influenced by our own needs in our race trailers: from wheel well cabinets, thin-line cabinets, that spread the load directly over the axle to tool boxes. Our drawers have a propriety locking device that keep them secure preventing them from sliding open while driving. We also make some very practical computer work stations that, of course, have become increasingly popular.
RacingJunk: How do you balance work and racing? Literally, who does what? And how does being a part of the race community contribute to that?
Brian Hope: I spend a lot of time talking to customers, along with delegating the work to our eight employees and trouble shooting. Customer liaison and service is very important. We have lots of repeat customers and I want to keep it that way. And we work with some non-racing clinets. There’s a large movie production community in Madison, GA and we fit out a lot of trucks for them. We also have a client called BoxmanStudios.com that build out containers for all sorts of uses and we supply them with a wide variety of cabinetry.
That said, the racing business remains our core and we work with Baumgardner Racing, Greg Carillo Racing, Steve Jackson Racing, Jeff Lane at Hancock & Lane Racing, Jeff Lutz at Lutz Race Cars, Sterling Marlin Racing, Bill Windham Racing and most recently Mike Morel Racing.
TechnoCraft also helps motorcycle drag racers Tracy Kyle and PTS Racing.
RacingJunk: What’s your (individual) favorite things to drive — on and off the salt/track
Brian Hope: Anytime I get to put my helmet on I guess that’s my favorite.  I enjoy driving Dad’s Rat Trap and I like to drive Rich Guasco’s Pure Hell and of course I always like to go fast on the salt.
About Andreanna Ditton 228 Articles
Andreanna Ditton is the Content Manager for MotorHead Media and the Editor-in-Chief for RacingJunk.com/news. She's been working in the automotive publishing industry since 2007 focusing on racing and performance for motorcycles and cars.