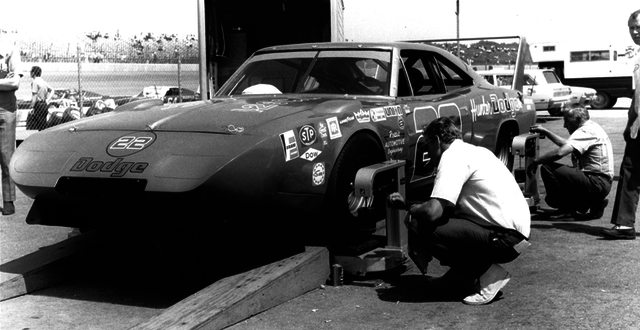 The 1969 Dodge Daytona will forever be a NASCAR legend. It is the car that forever set the sanctioning body on its ear. The iconic race car made its debut in the 1969 Talladega 500, the inaugural event at the world’s fastest speedway. Richard Brickhouse drove the number 99 Daytona to victory as Bobby Isaac drove his number 71 car to a 4th place finish. While these were the only two wing cars driven in the event, they were marred by a boycott with most of the NASCAR drivers. We all know how that eventually ended up.

It was in 1968, that the advantage that Chrysler’s Hemi commanded in NASCAR had been virtually eclipsed by its competitors. Ford challenged the more aerodynamic Charger 500 with its own slippery versions of the Torino and Mercury Cyclone. For this reason, Dodge pulled out all the stops and unleashed the 1969 winged Daytona. With its pointed front nose and high rear wing, the Daytona put Mopar back at the front of the grid, and the Aero Wars were under way.

After almost two years of track domination by Ford and Mopar, NASCAR’s founder and President Bill France subjected the winged cars to severe displacement limitations. It was at this time that most car owners abandoned the wing cars, with one rebellious holdout: a young man named Mario Rossi. Rossi and his driver; Bobby Allison had invested a lot of time in their Number 22 Daytona, so they decided to experiment with a destroked 305 cubic inch small block. Allison tested the new combination at Daytona and Talladega but never drove it in competition.

This throwback image shows Bobby Allison’s Daytona that we’re guessing was taken early in the 1969 season. We say that, because the car is missing the Allison signature gold and red paint covering, and it still has 426 C.I painted on the hood (In 1970, the wing cars were relegated to running 305 cubic inch engines).