RacingJunk News > Racing > Drag Racing > Tasca’s Back in the Game 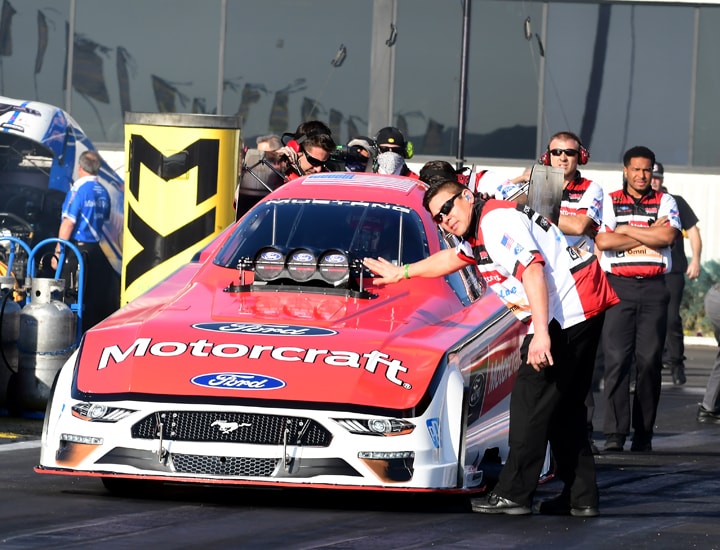 Bob Tasca III withdrew from NHRA Mello Yello Drag Racing Series Funny Car competition when Ford left the professional drag racing ranks at the close of the 2014 season. The third generation Ford dealership-owning Rhode Island native couldn’t imagine driving anything but a Ford in competition; with the manufacturer out of the game, so was Bob, his like-named father and late grandfather.

Bob Tasca III never stopped believing there was a place for Ford in the Funny Car ranks and he did everything he could to get the Blue Oval back in the game. It took some time; no doubt the stress of the many conversations wore on him and the family, but still they persisted.

It all came right for Tasca and his family last fall, after the NHRA race in Las Vegas and right before the SEMA show. The Tasca clan met with Ford operatives the Monday night before SEMA’s trade show opened and were able to cement a deal that would allow Ford back into the Funny Car wars and move Bob Tasca III to where he’s most comfortable, behind the wheel of a 10,000+ horsepower Ford Mustang flopper for the full 2018 NHRA season.

Tasca began building a crew to build his new Motorcraft Ford Mustang and chose Eric Lane as his crew chief. Lane, who most recently worked with Rahn Tobler on Ron Capps’ Don Schumacher Racing (DSR) Dodge Charger R/T racecar. Lane has plenty of experience with the Ford Mustang, as he arrived at DSR after several years working with John Force Racing, who also raced Ford Mustang Funny Cars before the manufacturer departed. It’s a circle dance in NHRA.

With his brand new car, brand new crew, Tasca went for pre-season testing and made some passes, but Lane acknowledged the prime rationale for going to Wild Horse Pass Motorsports Park outside Phoenix, site of the second race of the year, was to get the crew up and running. It’s a true dance each team member performs between rounds as they tear down and rebuild the engine and prep the car to run, hopefully, a second time during eliminations, a third and maybe even a fourth round.

The Tasca team arrived at Pomona, Calif. site of the first race of the year, the 58th annual Lucas Oil NHRA Winternationals and got to work. Tasca’s two Friday qualifying sessions worked better that his Saturday attempts on the 1,000-foot dragstrip. “We were really pleased with Friday, running back-to-back 3.98-sec [passes]. That’s what we wanted to do, get a solid baseline,” Tasca said.

His first Saturday run, under substantially cooler conditions, was “too aggressive. There was too much clutch and it smoked the tires, but it was on a great run. The last run we pulled the clutch back a little bit to make it go. We really wanted to make a full pull on that last session and the motor blew through the clutch,” Tasca allowed. The two Saturday runs were in the four-second range.

Tasca qualified 15th in a 20-car entry that allows the top 16 to race, and had to race 2012 Funny Car champion Jack Beckman in the first round. While eliminations began promptly at 11AM PT, it took a full two hours to run the Top Fuel and Funny Car classes. There were delays for cars having issues getting down the track, for oil-downs and for Brittany Force’s massive Top Fuel accident. Crews began to scramble and change their setups as the conditions they originally faced were now changed.

“You saw a lot of good cars smoke the tires early,” Tasca explained. “We knew that there was a high probability that you could smoke the tires with the temperatures changing so much. The bottom line with this team is that we [now] have made five full passes down the track since we put this car together,” Tasca said after losing a close race to Beckman (winner’s 3.907sec/333mph to a losing 4.016sec/324.12mph).

“Some of the changes we made we made for today were positive; the car ran 324 mph being conservative on that first run because the track was hotter today. We’re going to head to Phoenix with a good direction,” Tasca noted. “We’re going to make full pulls; the more full pulls we make the better we’re going to be. The guys performed flawlessly on this Motorcraft Mustang. I’m proud of them,” he said.

“Clearly we didn’t have the setup to go run a 3.85 this weekend. If we would have tried to go out and run a really low number, we may not have made it down the track, so we wanted to go out in the first round a make a full pull and try to win. Eric’s not happy that we didn’t qualify better and trust me, there’s nobody that I have more confidence in than him to go make this car run 3.80s. We gave ourselves a solid chance to win that round; that’s exactly what we did.”

Going out of competition in the first round isn’t what teams attempt to do, but for such a new enterprise as Tasca’s, the results his team obtained during their first rounds of qualifying and competition will help them going forward. This Brownsburg, Ind.-based squad can’t wait to get going again next weekend in the second – of 24 – races, the 34th annual NHRA Arizona Nationals.