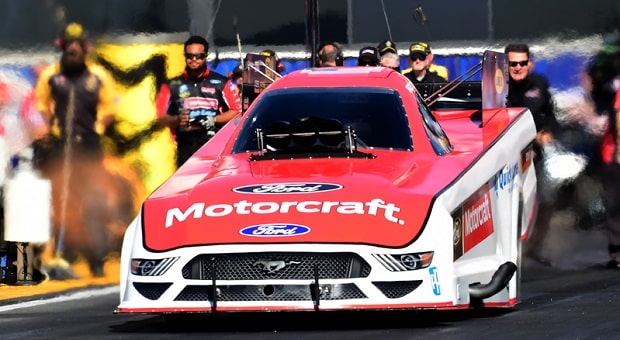 Ford returned to NHRA Funny Car after a three-year hiatus and, in late 2017, began developing its new Mustang body with a 2019 debut targeted. The new body, which was initially shown at the 2018 SEMA show, replaces a Mustang body that has been in use since 2009. While the older design had success with Tasca and Tim Wilkerson, Ford realized it was time for a new design to mirror the latest model road-going car – and aid aerodynamics at over 325mph.

As is customary, Ford began its design with computational fluid dynamics (CFD); what’s different is that the firm skipped a prototype model phase and went directly into building the car that Bob Tasca III brought, first to testing at Phoenix and later to the season-starting Lucas Oil Winternationals in Pomona. The use of CFD saved a bundle of money by placing more emphasis on scale models. This process is used in other Ford racecar development.

The actual new Ford Mustang body that Tasca used to record a semifinal result against eventual winner Robert Hight had a 10-day gestation in Michigan last October, was duly approved by NHRA and went to Tasca’s Brownsburg, IN shop for fitment by returning crew chief Eric Lane and co-crew chief Mike Green, most recently a floating crew chief and instigator of much development work at Don Schumacher Racing.

Bob Tasca III’s Motorcraft/Quick Lane NHRA Funny Car is the first off the rack, but Ford intends to have a new Mustang body in the hands of stalwart Tim Wilkerson before the first third of the 24-race season is complete. It’s not known whether Wilkerson’s new part-time teammate Blake Alexander, who intends to run half the season with his own Funny Car team, will have access to the new Ford Mustang body this year.