Tanner Gray came out of the starting gate for last year’s NHRA Mello Yello Drag Racing Series like a house on fire. The son of Pro Stock racer Shane Gray and the grandson of Pro Stock/Funny Car standout Johnny Gray took to the Pro Stock category like it was his own.

Tanner racked up the wins – earning five in all – starting with the fourth event at Las Vegas, and ended up fifth in the final standings, finishing behind the three-car KB Racing marauders of Bo Butner, Greg Anderson and Jason Line. Much is expected from the driver in his sophomore year and Tanner Gray has shown a good amount of maturity since his first season, one in which he earned NHRA’s Auto Club Road to the Future rookie award.

This year Gray will, the family says, be their sole participant in the championship. Gray Motorsports has cut down on its outside work and intends to focus all of its attention on Tanner Gray and his teammate Drew Skillman, two of the young guns of Pro Stock. The goal is to beat back KB Racing and show this team has a right stuff to make it to the top of the podium.

Tanner Gray knows a good start to the season is imperative; the 19-year-old realizes he needs to set the tone for the year by getting good results early on. It didn’t go his way in the opener at Pomona nearly two weeks ago; Gray’s first opponent in Sunday’s elimination was reigning champion Bo Butner, whose eighth place qualifying result beat Gray’s 11th place. He was out of competition after a single elimination run, while Butner went on to win the race. 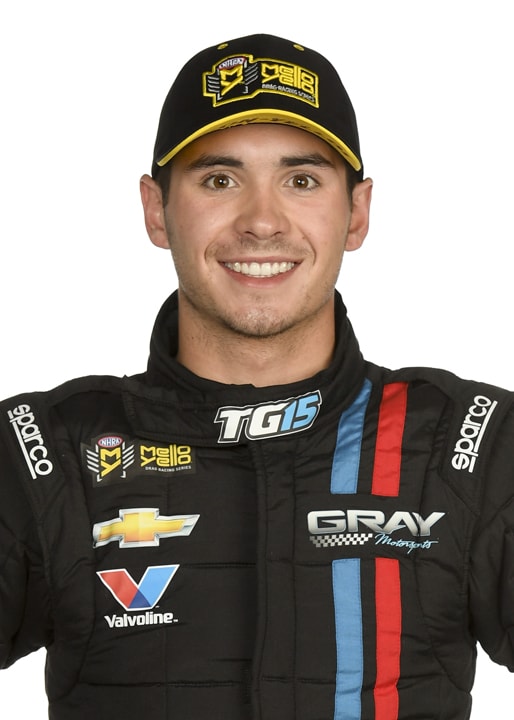 Heading to Wild Horse Pass Motorsports Park outside Phoenix, Ariz. on Friday, Gray said he felt good. “We think we fixed our problem from Pomona; we had some tuneup issues. It’s crazy how tough it is to get these things running right – I feel like we are still constantly learning about the fuel injection stuff, but we got it fixed and, all in all, I feel confident going into this weekend.”

After going to seven final rounds and earning four No. 1 qualifiers, winning the opening race of the Countdown to the Championship last year, Gray is working toward more good results in his sophomore season.

“My expectations for this year are the same as I had last year – to win. I try to take it race by race and not get too far ahead of myself,” Gray said. “I feel like if I can go to each race focused on winning that race, then I’ll be a lot better off. I try not to think about the championship too much. We just gotta take it race by race and see where the chips fall.”

With a class that has become a Chevrolet Camaro smackdown – only Alan Prusiensky is racing a Dodge Dart body with Dodge power – Gray knows he’s got a lot of competitors gunning for him, even beyond KB Racing. With one down and 23 races to go, he’s got to remain focused and remember to do what he says he wants to achieve.

“Every race is important to me,” the young driver noted. “Obviously it’s (Phoenix) not to the magnitude of a Countdown race when you’re running for a championship, but every race matters and every point matters. Drag racing [in this class] is so close and every single point you can get will benefit you at some point throughout the season.”

All-important qualifying for the 34th annual NHRA Arizona Nationals starts Friday afternoon at 1:30 and 4PM local, with two sessions set at the same times on Saturday. Cool weather is predicted. With 17 entries vying for 16 spots on the elimination ladders, Tanner Gray and 16 other drivers have their heads set to, first off, making the field before they can vie for a winner’s Wally trophy.