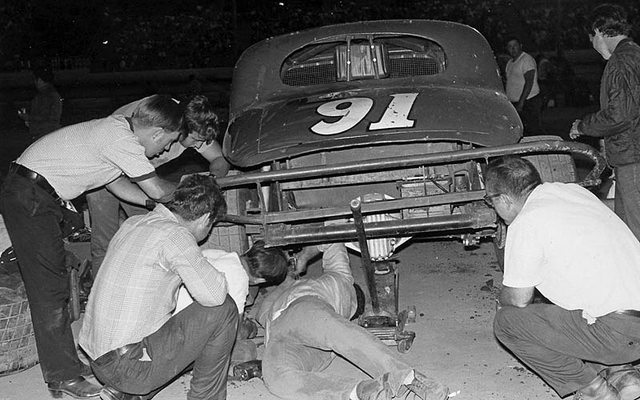 It was the 60’s and oval racing at our area dirt track was as big as baseball. Living in the middle of nowhere has its merits. On any summertime Saturday, the 30 minute drive to the track was way cheaper and easier than dragging the family the 1 ½ hour drive to the city to watch pro-ball. The hot dogs and beer were a lot cheaper too.

The fact that we had local guys racing the out-of-towners made it even easier to get sucked into this bush league racing scene. My dad had a couple of buddies who wanted a chance to fly around that dirt track and asked him for help. He was a skilled welder, and he would weld and re-weld their frames and roll cages during a stray weeknight. Watching their beater cars crash or break down while sitting in the bleachers just made him antsy, so early next Saturday my brother and I found ourselves sitting among big rolls of grimy welding cables in the back of my dad’s welding van.

Like an ant carrying a battle ship, the feeble little 6 cylinder Ford Econoline van bounced and thudded down the access road to the pits. The inside was stuffed with an enormous welding generator boasting a V-8 engine, its exhaust pipe poking through the roof. 150 feet of heavy copper cables, grinders, clamps, cutting torches and full size tanks – the entire earth’s gravity straining to reclaim all of it. This involuntary low-rider wobbled its flattened out suspension and squished tires through the pits and finally rested next to one incredibly wrinkled and bruised stock car.

A tsunami of action kicked in. Jacks and jack-stands clanged, tires went bouncing in random directions. The men showed my brother and me, a variety of bright cracks in the black frame and tubing. The welding monster in the truck belched to a painful roar and streams of bright sparks poured from the injured metal of the race car. Intense blue welding arc cast shadows in direct sunlight. Within 15 minutes, its formerly broken carcass was strong enough to moonlight as a railroad trestle. The driver shook my father’s hand gingerly, practically crying and laughing at the same time.

This attracted a small crowd; all of them drivers with equally broken race cars. Some shrugging and nodding preceded a line of limping race cars being literally dragged through the dirt, to have their steel bones repaired. The bouncing tires, clang of metal, showers of sparks and bright blue flashes repeated like an assembly line. Four hours later, the cars all passed inspection and were screaming around the track, while we were being treated like royalty. Young boys being fed all the hot dogs we could eat and being invited to sit in real race cars while wearing a few layers of soot and grime. My brother and I were in boy-heaven.

It’s inclusive. That’s the beauty of bush league tracks in the middle of no-where. The sense of being welcome takes on a very clear meaning – it’s a family of racing. While the crowd in the stands is there to watch 1st and 2nd place, the best part of bush league racing is right there in the pits with us also-rans. It’s timeless… and just like when I was a kid, I can’t wait for next season.