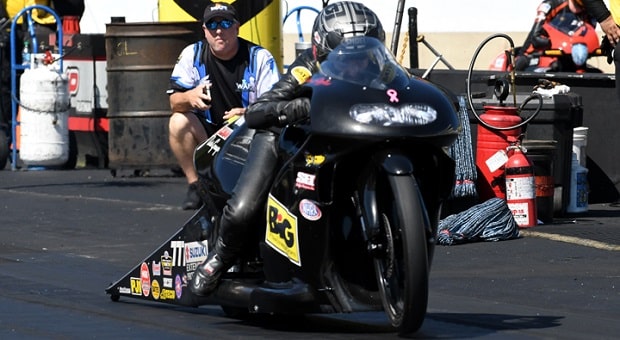 Some racers never see the inside of a Winner’s Circle. Others visit regularly to celebrate their victories. Some droughts are longer, others shorter.

In winning the second race of a six-contest Countdown to the Championship playoff series, Stoffer vaulted to second place in the standings, just 34 points behind leader Andrew Hines, whom she beat in the race’s finals with a lap of 6.869 seconds at 197.74 mph to Hines’ 6.876/196.59 quarter-mile pass.

Four years is a long wait to win a race, but Stoffer has put up numbers throughout that time, racing with the guidance of her husband Gary, who until this year prepared and serviced her Suzuki motorcycle. For the 2019 16-race campaign, Karen joined WAR Racing, allowing her to up her game while both she and Gary Stoffer shepherded the career of up-and-comer Jianna Salinas, daughter of Top Fuel standout Mike Salinas.

In reaching this final round, Karen Stoffer beat a quicker-leaving Ryan Oehler’s EBR in the first round, knocked off reigning champion Matt Smith, who fouled out in the second round on his EBR. Her exemplary .008 reaction time in the semifinals removed Eddie Krawiec’s Harley, so she would meet up with his teammate, the five-time champ who’s gunning for a sixth title this year. Stoffer’s win over Hines was a blink-and-you-miss-it 0.0098 seconds, or about three feet. 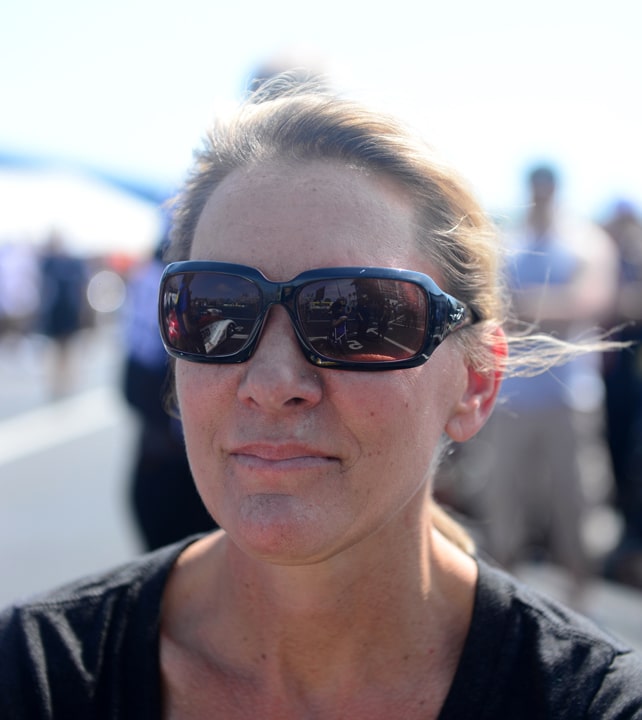 Recognizing the proficiency of the Pro Stock Motorcycle teams against whom she races, Stoffer noted, “I really don’t feel the pressure out there because every team is phenomenal. I listened to the team and did what I had been doing,” she said. “We had Matt, and then Eddie and then we had Andrew. Out of all the heavy hitters, those are it. We just went out and did our job,” after former points leader and teammate Jerry Savoie lost to Hector Arana Jr. in the first round.

“The Suzuki platform definitely went through some challenges and we’re not one of those high-budget teams, but we have fun. It’s been a long time [since her eighth victory] and I wasn’t even scheduled to race this year, and here we are in the Top 10 and winning a race in the Countdown,” Stoffer enthused after earning her ninth win in 22 final rounds, the most recent victory coming at Norwalk, Ohio in 2015.

After leading the standings at Reading, Savoie fell to fifth place, behind Hines, Stoffer, Krawiec and Matt Smith. Hector Arana Jr., Angelle Sampey, Angie Smith, Ryan Oehler and Hector Arana complete the current top 10 with the next outing coming in another week at zMAX Dragway outside Charlotte, N.C.

Can the Savoie/Stoffer WAR Racing Suzuki contingent keep up the pressure on the three Harley-Davidson motorcycles of Hines, Krawiec and Sampey? Will the EBR Buell motorcycles show their strength in the next four races, at the hands of Matt Smith, Arana Jr, Angie Smith, Oehler and Arana?

Suzuki had been looking for some relief from NHRA after Hines pretty much dominated the “regular” season of Pro Stock Motorcycle competition. Expect to see Harley-Davidson start the official whining if the Suzuki group cuts them down to size. 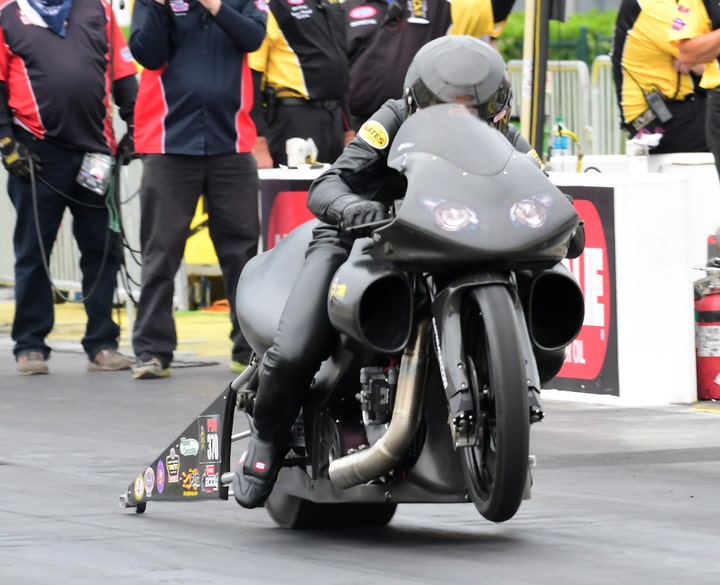