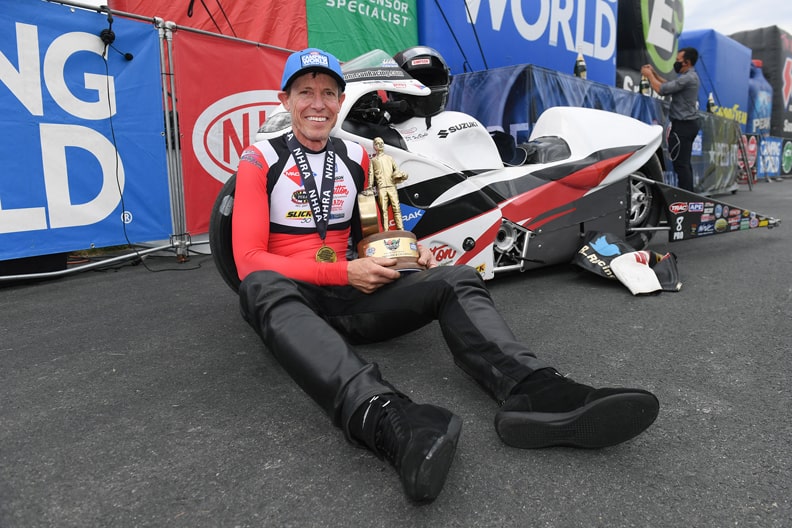 Steve Johnson currently holds second place in NHRA’s Camping World Drag Racing Series’ Pro Stock Motorcycle standings behind reigning champ Matt Smith. Johnson, riding a four-valve Suzuki with Monster cylinder heads, has looked primed for good results since the season began and earned his first Wally winner’s trophy at Charlotte’s Four-Wide Nationals – his first in seven long years. He hasn’t come down from that high yet – it might last until Pomona in November.

During that first-place famine, Steve Johnson rarely lost his cool, kept his composure and kept on racing against riders who might not have been born when he started racing NHRA Pro Stock Motorcycle back in 1987. At one point a couple of years ago, he thought about ditching his own team and joining Jerry Savoie’s White Alligator Racing; he tested at Bradenton and raced at Gainesville but realized he was always at his best with control over all facets of his race prep. 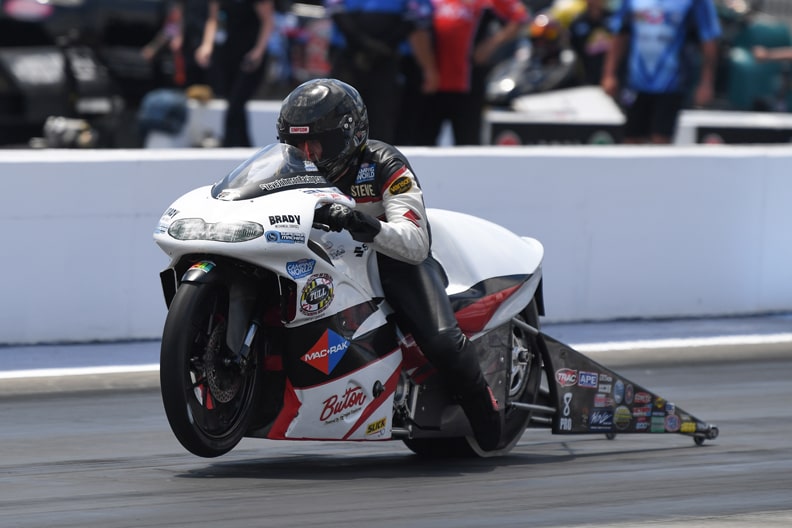 Always a long-serving Suzuki rider, Steve Johnson hasn’t raced with the big trailer, the large team – and has pretty much done all the prep work on his own, along with crewman Jock Allen. When COVID hit last year, he nearly lost Jock, whose mother succumbed to the pandemic, but both Johnson and Allen came back and this year they’ve shown they can run with the best, whether it’s Matt Smith, who beat Johnson at Norwalk last weekend in the finals, Andrew Hines and Eddie Krawiec from Vance & Hines – or any other hot shot in NHRA’s Pro Stock Motorcycle class.

What Johnson has is the knowledge about his motorcycle, the tracks where he races and the competitors he’s lining up to beat. When NHRA allowed 4-valve Suzuki engines, Steve and Jock were ready. In the season-starter at Gainesville, they went to the semifinals; Johnson went to the finals at the DENSO Spark Plugs Four-Wide Nationals at Las Vegas, had issues at Atlanta that saw him out after the first round, won in Charlotte – and got to savor that victory until the final round at Norwalk, as NHRA parked the motorcycles for two races. 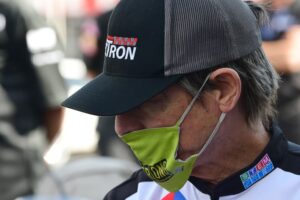 In that lag between competitive outings, Johnson bought trophies to personally give to his sponsors. As he put it, “For some, these are very, very difficult to earn. People have told me they’ve raced for a lifetime and never won [an] #NHRA Wally,” Johnson said. “After seven years, we had lots of people to thank. Ordering 20 trophies is surely a lot easier than spending the budget of seven years!”

After Norwalk’s runner-up finish, Johnson was positive and looking forward to racing at altitude in a few weeks, when the tour goes to Bandimere Speedway outside Denver. “As much as our Slick 50 Suzuki team would have loved another win, I’m still so proud of this team. Coming off a win at our last race, getting the No. 1 qualifier and then making it to the finals again! We’re showing high level performance and consistency,” Johnson declared. “We’re No. 2 in the points and we’re going to keep at it. Our hopes are to be serious contenders and we’ll continue to prove that.”

When he’s not prepping or racing his Suzuki motorcycle, Johnson spends a good deal of time working towards advancing new talent in the sport of drag racing. His support for all STEM education initiatives that bring both young men and women into the sport has been ongoing for many years; his activism has brought new fans and friends to drag racing.

About Anne Proffit 983 Articles
Anne Proffit traces her love of racing - in particular drag racing - to her childhood days in Philadelphia, where Atco Dragway, Englishtown and Maple Grove Raceway were destinations just made for her. As a diversion, she was the first editor of IMSA’s Arrow newsletter, and now writes about and photographs sports cars, Indy cars, Formula 1, MotoGP, NASCAR, Formula Drift, Red Bull Global Rallycross - in addition to her first love of NHRA drag racing. A specialty is a particular admiration for the people that build and tune drag racing engines.