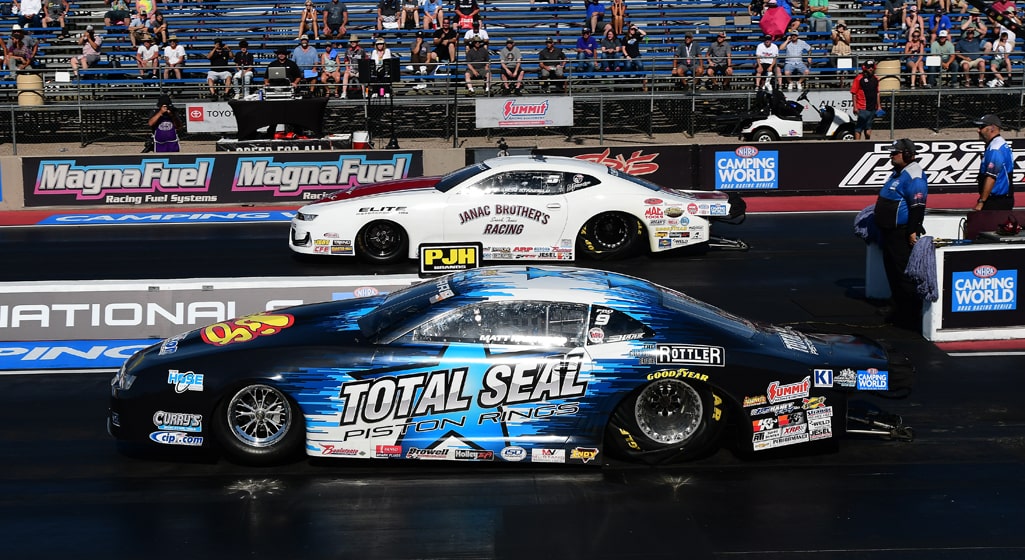 Following a weekend in the Mile High City, the NHRA Camping World Drag Racing Series moves from the peaks of Denver to the vineyards of Sonoma, CA.

NHRA’s Western Swing for the Camping World Drag Racing Series is a brutal exercise. Going from the Mile High City of Denver and Bandimere Speedway to near sea level at Sonoma Raceway to Seattle’s Pacific Raceways in the space of three weeks, the Swing puts pressure on teams and drivers to succeed at three grueling circuits in three grueling weeks.

With one leg of this trinity complete, there are only three drivers to have the opportunity to join three-time Top Fuel champion Antron Brown in sweeping the Swing. Since Pro Stock Motorcycle races only the first two legs, Bandimere victor Matt Smith won’t be able to cop the Sweep, but he does have the opportunity to take another win in Sonoma this coming weekend. 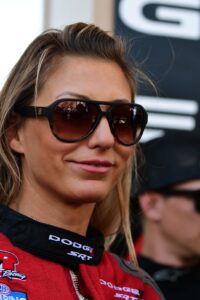 Victories by Leah Pruett, Robert Hight and Matt Hartford in Top Fuel, Funny Car and Pro Stock mean this trio do have the opportunity to sweep. But it’ll be tough for therm. It always is. It’s been 13 years since Brown swept the Swing for a second time, a telling factor in how difficult this can be. That being said, however, with NHRA heading for Sonoma, there are some racers who have a better chance than others to take that sweep.

One in particular who could sweep the Swing is Robert Hight, driver of John Force Racing’s Auto Club Chevrolet Camaro SS, who earned his fifth victory of this season in Denver. It was at Sonoma five years ago that Hight set the national record for Funny Car of 339.87 mph. That record was made back in the days of laid-back headers and burnt body panels; NHRA clamped down on both and, nowadays, we who watch are subject to only light, occasional burns on the side panels of the Chevrolet, Toyota and Dodge body panels.

Rules and the racing are different in 2022 than they were in 2017, but Hight is still quite the protagonist and racer. This year he and tuners Jimmy Prock and Chris Cunningham have gotten down the track more often than not and, following a near-non0racing situation in 2020 will attempt to win four races in a row at the wine country-adjacent drag strip and earn his 59th career victory in this event’s 34th annual iteration. 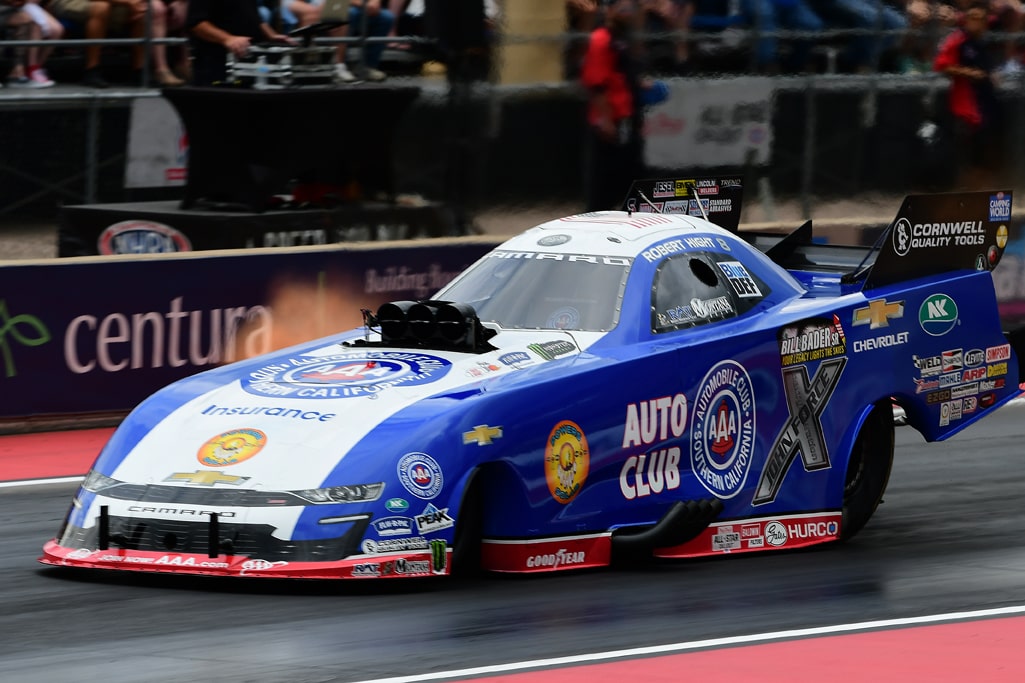 As the NHRA Camping World Drag Racing Series starts its second half of a 22-race season at the Denso Sonoma Nationals, all eyes are on Hight, Prock and Cunningham, and their John Force Racing Chevrolet Camaro SS as they attempt to further extend the driver’s regular season points lead of 95 over Tony Stewart Racing’s Matt Hagan (Dodge Charger SRT Hellcat) and 166 over reigning titleholder Ron Capps, whose Ron Capps Motorsports Toyota GR Supra has claimed the marque’s first Wally trophy in 2022. Behind this trio are John Force (-314 in his Chevy Camaro SS) and Bob Tasca III, who is 435 points off the lead in Funny Car with his Ford Mustang.

Behind this quintet are Cruz Pedregon (Charger), J.R. Todd and Alexis DeJoria in their Toyota GR Supras, Tim Wilkerson and Chad Green, both of whom drive Mustangs. All of these 10 drivers are on the 16-car entry list for Sonoma, together with Jim Campbell and Paul Lee in Chargers, Terry Haddock and Blake Alexander’s Mustangs, Steven Densham in a Mustang, local Salinas racer Jeff Diehl’s Toyota Camry and nostalgia Funny Car expert Jason Rupert, driving a Mustang. With 16 cars and drivers on the grounds, no one will be left out and no byes will take place. 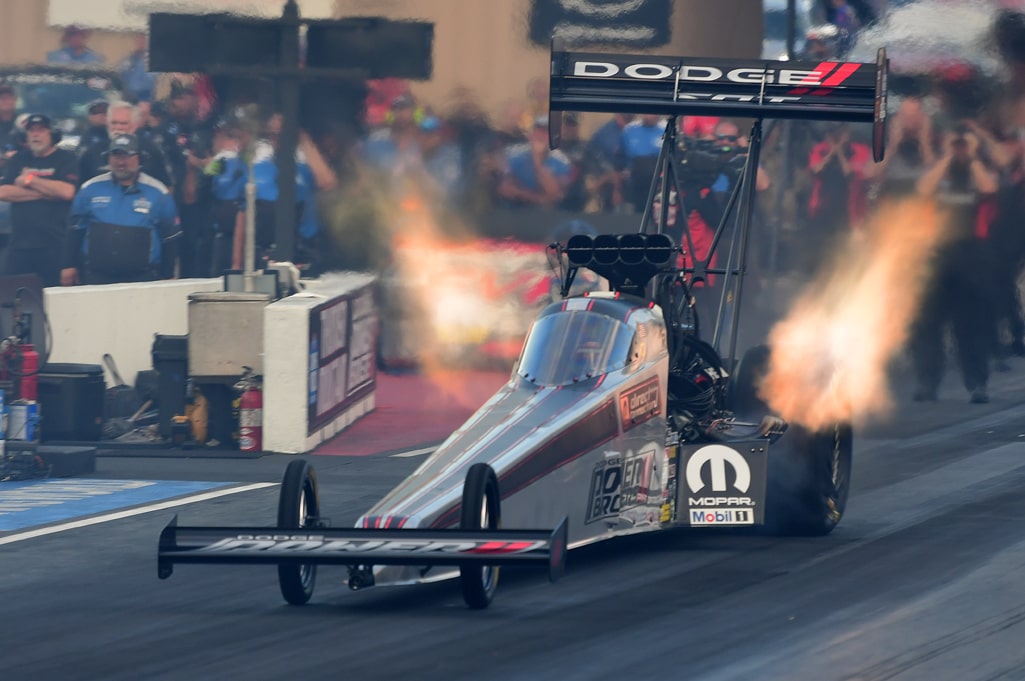 For Top Fuel, the joy of victory is still surrounding Leah Pruett, who earned the Wally trophy in Denver for her sponsor, Dodge Power Brokers, and vaulted from tenth to sixth in the point standings, behind Mike Salinas, Brittany Force, Justin Ashley, Steve Torrence and Josh Hart. Of this grouping, only she, Salinas, Force, Ashley and Hart made it past the first round at this race. Austin Prock, Langdon, Clay Millican and Doug Kalitta are the balance of the dragster top 10, with Antron Brown and Tony Schumacher hoping to work their ways back into the Countdown game.

Pruett’s final round opponent, Shawn Langdon, making his second finals appearance in the past three races, had a mechanical issue on the start line and didn’t run the race’s finale because of it. Still, the fellow Californian drove her rail hard in the finals, clocking 3.884/316.38, with an .078 reaction time. With 17 dragsters again on the grounds at Sonoma Raceway, someone will go home after the third and final qualifying session on Saturday evening. With his string of championship Top Fuel titles in jeopardy of stopping at four, winless-in-2022 racer Steve Torrence will attempt, once again, to go back-to-back on a track that has, in the past been kind to him.

Brown, now owner of his team, and former teammate Schumacher, could be ready to show their marks as the second half of the Camping World Drag Racing Series begins. As stated above, Brown was the most recent driver to sweep the Swing; eight-time dragster champ Schumacher, who has driven a Maynard Family/SCAG dragster through 11 races, will fly the blue colors of Okuma in the Wine Country. They’ll all be hoping to keep part-time drivers Alex Laughlin, Cameron Ferre, James Maroney, Scott Palmer and Ron August Jr. behind them.

It’s a 16-car Pro Stock entry in Sonoma for the 12th race of the year, with all but three of them Chevrolet Camaro race cars. Only the three-car Cuadra entry of Fernando, Fernando Jr. and Cristian (from Elite Motorsports) are racing Ford Mustang bodies in Sonoma. Of the latter trio, only Cristian Cuadra made it out of the first round in Denver and he went to the semifinals, where he fouled on an early departure from the tree. Last week’s winner, Matt Hartford, has been improving his position every time he stages and his victory over Aaron Stanfield, who’d been the quickest car until that final round, was a matter of “when” not “if”.

Stanfield is the defending Sonoma victor from 2021, but still lags Elite Motorsports teammate Erica Enders, who had three tough qualifying sessions at Denver before coming through as the No. 2 qualifier last week. She was out after the first round (to Mason McGaha) but still holds 35 points on Stanfield. Kyle Koretsky (-259 and also out in round 1), Dallas Glenn and Greg Anderson. Both of those drivers exited after a single pass, as did rookie sensation Camrie Caruso, who fouled in her first racing pass on Thunder Mountain.

After Denver, Mason McGaha, Hartford, Caruso, Deric Kramer and Troy Coughlin Jr. comprise the balance of the top 10, with Bo Butner III just three points behind Coughlin Jr. in eleventh place after defeating Anderson in the first round, but being placed on the trailer by Stanfield one lap later. Chris McGaha, Mason’s dad, celebrated his birthday in Denver and went a couple of rounds, but he’s still having a less than satisfactory season. Making one of his West Coast appearances, the Pro Stock community welcomes Steve Graham back to the class.

Matt Smith used his venerable Buell last weekend on Thunder Mountain. A well-sorted motorcycle that helped him to his fifth title last season, Smith is committed to returning, this weekend, to the Pro Stock Motorcycle four-valve Suzuki he’s been co-developing with the Scrapper’s squad of Jianna Evaristo and Jimmy Underdahl. Wife Angie continues to run her Buell and do well with it, making the semifinals before being ousted by runner-up Joey Gladstone and his Suzuki. 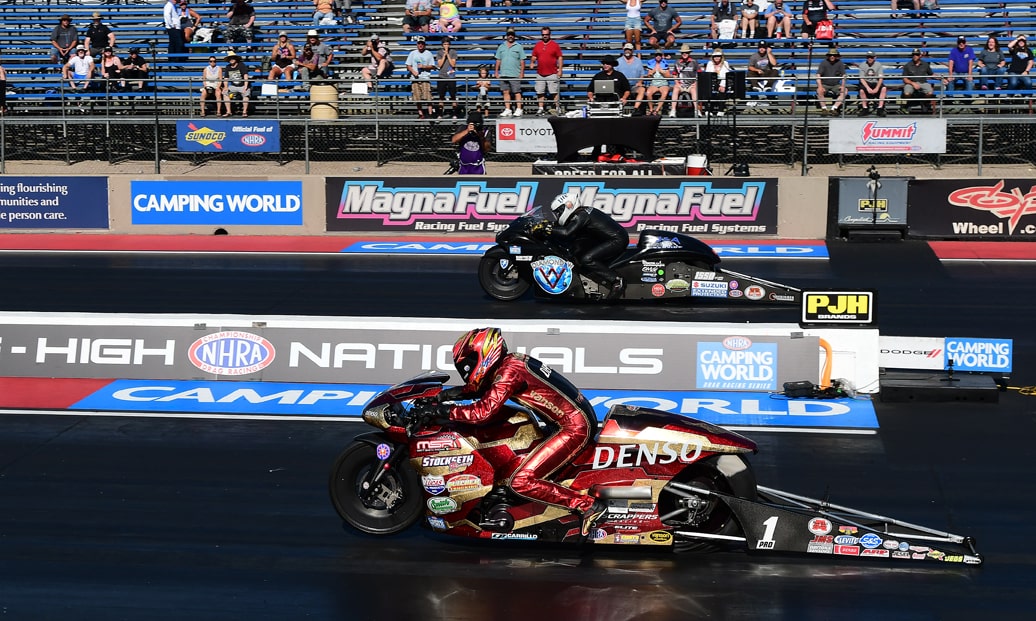 It’s another short field of 14 for the motorcycle class this weekend, with 10 Suzuki entries and four Buells. NHRA is shaking things up in this class – again – trying to figure out how to gain parity among the V-Twins and Suzuki bikes. On Tuesday of this week, they sent a directive allowing the four-valve Suzukis to lose five points and race at a minimum of 625 pounds, while the S&S and V-Twin engine combinations are gaining 10 pounds to 640. Will it make a difference? Suzuki has won every race except Denver and did this with weight additions after the season started in Gainesville.

Despite a first-round loss at Bandimere Speedway outside Denver, Steve Johnson and his Suzuki remain at the lead of the Pro Stock Motorcycle standings, albeit only 10 points ahead of Vance & Hines’ Angelle Sampey’s Suzuki, Matt Smith holds third-place points (-19), followed by Joey Gladstone’s Reed Motorsports Suzuki (-46) and Angie Smith, who is 58 points behind Johnson and a single point ahead of sixth-place Karen Stoffer and her Suzuki. Suzuki riders Eddie Krawiec, Jerry Savoie hold down P7 and P8, with Marc Ingwersen’s Buell in ninth and Jimmy Underdahl holding tenth place with his Suzuki. Ryan Oehler is 11th, less than three rounds out of the top 10.

Since Pro Stock Motorcycle won’t be traveling to Seattle next week, this is a very important race in Sonoma, particularly as both Buell and Suzuki teams come to grips with the new rules shoved at them. Evasisto is back for her local race – she’s from San Jose, about an hour south of the Wine Country – and Katie (Sullivan) Justice, racing a Suzuki for Sullivan Drilling. While Ingwersen isn’t on the entry list this weekend, Scott Bottorff from Brentwood, Calif. traveled north with his Gann Custom prepared Buell, as has Kelly Clontz and her Suzuki, as well as Lance Bonham and his Buell. It should be an interesting race to watch because of NHRA’s dictates.

Friday’s single, late afternoon, early evening qualifying session should be quick and fast, with temps waning as the sun sets in Sonoma. There’s not an ounce of rain predicted and highs should be in the low-to-mid 80s throughout the daylight hours with lows in the high 40s to low 50s. As the sun disappears in Sonoma, it cools quite easily and that Friday night session could become a record-setting one for all classes involved. Saturday’s two sessions should be done by 6PM and will be more like the weather racers will encounter for Sunday eliminations, which begin at 10:30AM PT. Final elimination for this 34th annual Denso Sonoma NHRA Nationals will be shown on the FOX network beginning at 4PM ET.